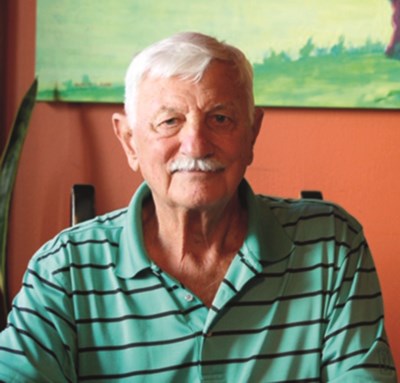 Heaven received a true gentleman on December 11, 2020. He will be forever missed by his beautiful bride (as he referred to her) and life-long love, Elena. Married in 1958, they set out to populate the earth with their devoted children: Leonard (Brenda Thompson), Janice, Carla (Rick Pascall), Christine (Jason deSoto), and Paul (Christa DeLuca). John was so proud, and deeply involved in the lives of his children, grandchildren and grandpuppies; attending games, concerts, productions, graduations, reveling in their accomplishments and hanging out with them whenever he could. His encouragement, advice and love will be deeply missed by his adoring grandchildren: Hannah, Joshua, Paolo, Kristina, Adelaide, Genevieve, Lucas, Johnny, Mia, John Paul (JP), Halie, Elena, Stephen and step-grandkids Kristen and Kerri. John will miss his Wednesday afternoons with his best bud and brother Edmond, and was predeceased by his loving sister, Angelica (Dolly Falco).

Called to the bar in 1957, John was an accomplished lawyer, well-respected in practicing commercial and corporate law, alongside his life-long friend and law partner Nicholas Zaffiro. As co-founder of the firm Agro Zaffiro Parente Orzel and Baker, he spent decades representing clients and friends. He distinguished himself as a learned practitioner and has been a principal to approximately 300 law students who articled with the firm over the years.

John was active in the community.  He served as past president and member of the Sons of Italy, Trieste Lodge.  Realizing the needs of seniors, families and persons of disabilities in our community, he initiated the formation of a committee to study and contribute to these needs. This activity led to the establishment of the Sons of Italy Housing Corporation which resulted in the acquisition and construction of several buildings in Hamilton, known as St. John’s Place, Columbus Place, DaVinci Place, Trieste Place and Villa Verdi. He was the corporate and commercial solicitor engaged in all of the legal services required with respect to the incorporation of the Sons of Italy Charitable Corporation, and in the acquisition of lands and buildings of the senior’s retirement residence in Hamilton known as “Villa Italia”.

Described by friends and family as: humble, kind-hearted, friendly, handsome, gentle, dignified, compassionate, honourable, a man of integrity and supreme intellect, respected, stylish, one of the best people on earth, and a real mensch!

John built upon the integrity and high standards of the Parente name, established by his father and mother (John and Lucille).

In normal times there would have been a significant funeral and celebration of life for a man such as this, but as we know these are not normal times. A private family service was held at Friscolanti Funeral Home, Hamilton Ontario.

John would be honoured if donations to Villa Italia were made in lieu of flowers. Our sincerest gratitude to everyone at Joseph Brant Hospital (ICU), for making the best of very difficult circumstances.

God either needed a lawyer, a tennis partner, or maybe a fourth for golf and he has all those in John. We were so blessed to have him for so long!