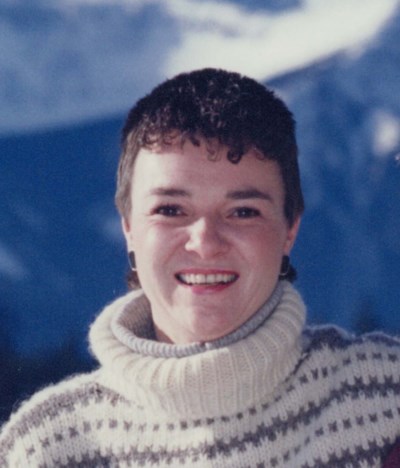 The family of Melanie Dee Reilly (neé Lindsay) is saddened to announce her  passing on June 15, 2020 after a short, courageously and gallantly fought battle against cancer.

Melanie was a proud Albertan. Born in Calgary to Charles and Irene (Pat) Lindsay, Melanie felt most at home in the outdoors and found any opportunity to visit the mountains.

Her working career included many years in the oil patch ending that phase of life as executive secretary to the president at what was then Western Decalta (now Pembina Pipeline). Melanie and husband Don met at a company golf tournament in Turner Valley in 1978 and married in 1979. Both golfed poorly, but that’s another matter.

At the completion of the 1988 Calgary Winter Olympics, in which both were very involved, she followed, encouragingly, Don’s entrepreneurial inclinations to the mountains and Banff. After a few years working together, she and “the boss” (yeah, right) decided she would move on, career-wise. Fixing stuff was not her forte. She enjoyed time at The Printing Company, the Banff Public Library, and Standish Home Hardware, before fifteen years at the Banff Centre working in the Registrars Office, ending her career in the Finance Office.

Her passions in life were her close friends, her canine family, and camping - the farther “away” the better. She enjoyed hiking, skiing, and fishing, until rheumatoid arthritis made those difficult. She continued to relish a good campfire with a few close friends, especially beside a lake or a stream.

Melanie is survived by Don, her loving husband of 41 years, of Banff; her brother Robert (Bob) of Kingston, ON; her brother-in-law Phil Reilly in Kinburn, ON; her nephews Finn Lindsay in London, UK and Ian Reilly in Nanaimo, BC; and nieces Jill Lindsay in Toronto, On, and Shannon Rosnak of Hampton, ON. She also leaves close friends Lynda, Bernie, Shelley, Patricia, Doug and Dale.

As per her wishes, cremation has occurred. A “gathering” in “Melanie Style” will be held at a later date - whenever safe travel and visitation is appropriate.

A very huge thanks to Drs. Hoegh-Petersen, Smiljic and Baergen for your compassion, courtesy, and caring. The same can be said for every person with whom she came into contact while in the care of the Banff Mineral Springs Hospital. Not enough praise can be given, especially considering the challenges and implications of COVID-19.

In lieu of flowers please make donations to either your local chapter of the SPCA or other animal welfare organization, or “the Covenant Foundation” in memory of Melanie. Funds are specified for improvements / alterations to the Palliative Care suite at the hospital.