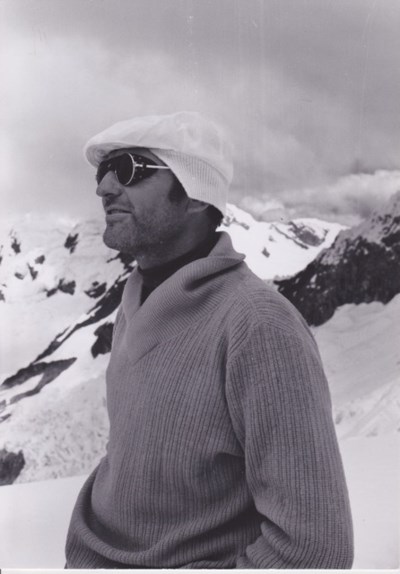 It is with sadness that the Delesalle family announces the peaceful passing of Philippe Delesalle on July 6 in Canmore, Alberta, with his family at his side.

Philippe will be fondly remembered by his wife of 60 years, Mireille, and children, Nathalie, Bruno (Janet), Marco (Kelly) and his two grandchildren, Amélie and Nicolas. Philippe was the second youngest of eight siblings and is survived by his brother Francis Delesalle, of Caen, France and numerous nieces and nephews.

Philippe was born in Normandy, France in 1929 and emigrated to Canada in 1950, arriving in Banff in 1952.  It was in Banff that Philippe discovered his love for the mountains. Philippe’s architectural studies took him back to Montreal where he graduated from the McGill University School of Architecture in 1959. Shortly after graduation, Philippe met his future wife and partner in adventure, Mireille Le Bars. Philippe and Mireille married in 1960, and returned west to settle in Calgary and begin their life together. That same year, the architectural firm, Cohos Delesalle Architects, was founded. Philippe’s passion for architecture and keen understanding of challenging mountain environments inspired his design of numerous innovative, functional and aesthetically pleasing backcountry and heli-ski lodges, including CMH Bugaboo Lodge, Cariboo, Bobbie Burns and Adamants, as well as Sunshine Village Hotel and Day Lodge. Just as important to Philippe were his many other architectural accomplishments, including churches, schools and the original Banff Library, now the Banff Archives.

In 1961, Philippe and Mireille acquired a small cabin on Policeman’s Creek in Canmore and moved their young family there permanently in 1973. In 1970, they purchased Swansea Ranch in the Columbia Valley, which was to become integral to their way of life as a family.

Philippe was an explorer at heart who travelled the world seeking new adventures. In the early ‘50s, Philippe travelled to the Arctic to live with the Inuit for six months. Throughout the ‘50s, he participated in numerous climbing expeditions in the Rockies and Selkirk mountains, as well as ascents in the Yukon and Peru. Philippe and his mountaineering friends, led by his good friend, Hans Gmoser, pioneered ski traverses throughout the Selkirk and Rocky Mountains. In 1965, Philippe attained his pilot licence and soon undertook to fly his single engine Mooney around the three Americas. Philippe enjoyed flying and in later years took to flying a glider in the thermal updrafts of the Columbia Valley, above Swansea Ranch. In 1973, he crossed the Atlantic Ocean on the well-known French sailboat, Pen Duick II, and later crossed the Sahara Desert on foot and by camel.

Philippe had a deep appreciation for the land and a great love of horses, stemming from his early years in France. Swansea Ranch fulfilled Philippe’s vision of working the land, raising horses and providing his family the opportunity to learn about nature and the value of hard work, as well as foster a lifelong appreciation for horses. Swansea Ranch had a formative influence not only on his own children, but also on the children of close friends who spent many summers at the ranch. Charismatic and very loyal to his friends, Philippe had great generosity of spirit and a great love for storytelling, music and reading.

Philippe’s many accomplishments are a testament to his quest for adventure, his passion for the mountains and, most of all, his deep love for his family. We miss him dearly but know that he has embarked on his next great adventure.

At Philippe’s request, there will be no memorial service. Donations in memory of Philippe may be made to the Alpine Club Of Canada “Philippe Delesalle Fund”, created to support and benefit disadvantaged children and youth who would otherwise have limited opportunities or prospects to experience the mountains, mountain life and culture.

The Delesalle family would like to extend a very special thank-you to Dr. Michalyshyn, Dr. Quinlan, Dr. Morin, and the wonderful, caring staff and medical crew at Origin and at the Canmore Hospital.