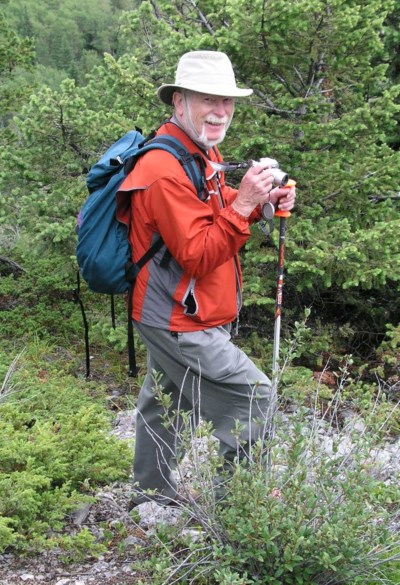 Robert (Bob) Smith passed away peacefully in Canmore at the age of 94.

Bob, an only child, was born in Banff in 1926. He lived and worked in the Bow Valley all his life. He grew up at Lake Minnewanka, in the hydro plant employees’ village. When the new hydro dam was built in 1941, this area was flooded (and is now 60 feet underwater and a popular dive site), and Bob’s family moved into Banff.  He met his wife, Mary Parkinson, in Banff in 1947 and they were married in 1953.

Summer jobs with Calgary Power (later TransAlta Utilities) during high school and college segued into a lifelong career in the company, primarily in the Hydro Control Centre. Bob and his family lived in Seebe from 1953 until 1978 when Bob and Mary moved to Canmore.

His love of the Rocky Mountains was his life’s passion.  He was an avid botanist, hiker and environmentalist, and happily shared his extensive knowledge with all who were interested. His solo hiking life took him to innumerable mountain locations in Alberta, B.C, the Yukon and the U.S. He founded the local seniors’ hiking group, the Meanderthals, in 1993, and led hikes for the “Walk Talk and Gawk” group which started through Ralph Connor United Church.

Bob was also a founder of the Bow Valley Naturalists, and was part of many efforts to save the wild spaces in the Bow Valley.  He was especially proud one of their main achievements, the designation of the Mount Yamnuska area as a Bow Valley Protected Area in 1999, after 25 years of lobbying with the Alberta Government.

Bob was an accomplished photographer. He was a founding member of the Seebe Camera Club (later the Bow Valley Camera Club) in 1959. He won numerous awards for his photography locally, nationally and internationally. While on assignment with the National Film Board In 1968, he photographed a trip through Northern Alberta, Wood Buffalo National Park and on to Yellowknife. He presented photo shows on a range of topics including local wild flowers and his mountain adventures. He was a Life Member of the Canmore Art Guild.

Bob was predeceased by his wife of 61 years, Mary M. Smith (née Parkinson).

The family wish to thank Dr. John Michalyshyn, Dr. Emma Morin, and the wonderful nursing staff at the Canmore Hospital for their compassionate care during Bob’s final days.

In lieu of flowers, friends are encouraged to make a donation, in Bob’s memory, to the Canmore Hospital Ladies’ Auxiliary, 1100 Hospital Place, Canmore T1W 1N2