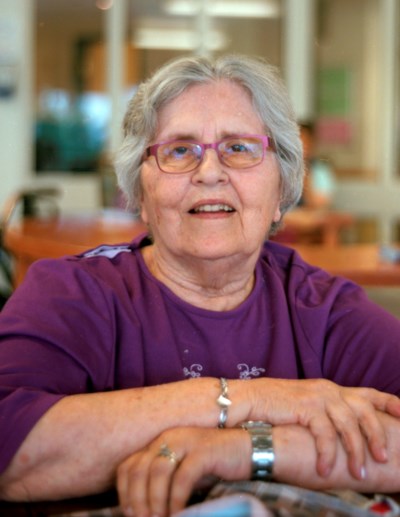 Vera Protz passed away peacefully October 27, 2020 at the Canmore Hospital Golden Eagle View Long Term Care Centre at the age of 84 years.  She was predeceased by her husband John Protz, in 2015.  Vera is survived and will be remembered lovingly and fondly by sons Don, Doug, Rob, and James, as well as Daughters-in-law Diana Protz (Don) and Sherry Protz (Doug).  Vera was a loving Grandmother and will also be remembered by grandchildren Julia, Max, as well as Madilyn, and Holden.

Vera was born and grew up in Mapova Alberta, a small farming community north of Edmonton near Thorhild.  She witnessed many changes over the years that saw the farm operate with plow horses that transitioned to tractors, threshers that transitioned to combines, and oil lamps replaced with electricity.  She also saw the introduction of telephone service, radios, and television.

Vera later attended the Vermilion School of Agriculture and Home Economics (today known as Lakeland College) for two years, from 1954 to 1955.  She later met her future husband, John, and together they were married in 1959 in Edmonton.  During this time, Vera worked for the Department of National Defense at CFB Namao in Edmonton, while John had just started out working at Edmonton Telephones.  In later years they would tell stories of how after both had worked their full-time jobs during the day, they would spend several hours working on building a house together in the Edmonton community of Athlone for their future family.  They would then return to their small basement suite at the end of the day, where both would promptly fall asleep on the nearest couch or bed.

In later years, between raising sons James, Rob, Doug, and Don, Vera worked for the Edmonton Public School board at Wellington Junior High and then at Westmount Junior High.  After Vera and John both retired, they moved to Canmore, Alberta, to be near the mountains. Both Vera and John developed a great love for the mountains after many years of taking the boys on vacations to Canmore, Banff, and into BC.

Vera loved doing quilting and was an active member of the Canmore’s Mountain Cabin Quilt Guild.  She was also involved in the Canmore Seniors Centre and spent many hours volunteering at the Canmore Hospital Tuck Shop.  While not keeping busy with the many activities in Canmore, she loved spending time with her Grandchildren.

In later years, Vera lived at the Origins Spring Creek and then at the Golden Eagle View Long Term Care wing of the Canmore Hospital, where she continued to meet new friends and enjoy life.

A memorial and celebration of life will be announced in the future when COVID rules will allow us all to gather safely, enjoy each others’ company and tell many stories.

The family wishes to pass special thanks to Spring Creek Origins and the Golden Eagle View Long Term Care wing of the Canmore Hospital. The many dedicated, caring, and the excellent staff of these two facilities made life better and gave Vera a reason to smile every day. If Mom’s ever-present smiles indicate the care she received, then the excellent staff at these facilities indeed went above and beyond.  Canmore is fortunate to have dedicated people such as these.  Vera and her family have been blessed to have been the recipient of their services.