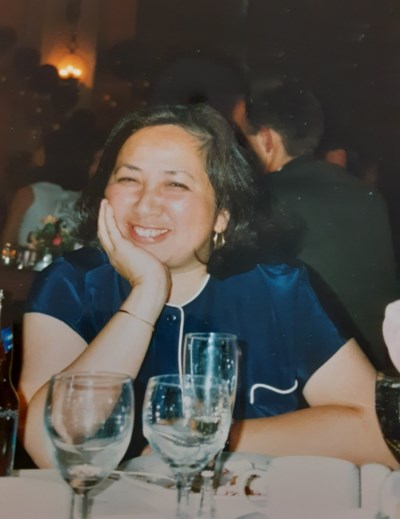 Vivian Sachiko Derondeau, 74, of Banff, AB, passed away on Tuesday, January 26, 2021 despite conquering breast cancer years earlier, and after a prolonged battle with liver disease.

Vivian was born on December 5, 1946 to Harumi and Hideo Nishimoto in New Denver, BC.  The family relocated to Toronto shortly after, where Vivian spent her formative years as 1 of 6 children. After graduating from Harbord Collegiate Institute in 1965, she caught the travel bug and headed west to Banff where, like many locals, she fell in love with the Rockies and knew she was home.

Shortly after arriving in 1969, she began working at the Banff Springs Hotel during the first winter the Hotel was open.  That December she met her future husband Michael, while both worked at the Alhambra Room.  Vivian’s interest in the hospitality industry was ignited because of this novel experience.  Like many young Banffites, a single job was insufficient even in the ‘70s and Vivian also worked at Sunshine Village and the Banff Info Center to further support her next adventure.

In 1971, Vivian and Michael were wed in Toronto at the Toronto Buddhist Church.  After settling in as newlyweds they embarked on what would define their lives and careers.  After completing a brief, 1-year partnership, Vivian and Michael became sole owners of what would become a Banff dining landmark, Guido’s Spaghetti Factory, in 1974.

With the chaos and excitement of entrepreneurship fully underway, Vivian became a mother in 1976 after the arrival of Sean and welcomed her daughter Sabrina in 1979.  They share many fond memories of Vivian chauffeuring and supporting them for innumerable Norquay night skis and years of ski races and training at the local hills.  She passed along her deep appreciation of the mountains and the beauty they held.  A favorite saying was “no matter how many times or how long I look at the mountains, they never look the same twice.”

The ensuing years saw Guido’s grow and thrive with Vivian establishing many lifelong friendships, not just with her staff but with many repeat guests.  Vivian’s passion for food and hospitality was shared with her children who also embraced various roles at the restaurant and often worked alongside her and Michael as a true family operation.

Vivian will be most remembered for her infectious, boisterous laugh, loving heart, generosity, passion for food and her many, many…small, white dogs.

Vivian is survived by her husband Michael, children Sean (Jacqueline) and Sabrina (Jeff), her grandchildren Ruby, Hershel and Charlotte, sisters Katie Watanabe and Karen Nishimoto-Shanks, and many loving nieces and nephews.

In Vivian’s memory, the family requests that you support any of Banff’s wonderful local businesses and hastag your experience with #vivianderondeau.  For all who loved her, go out and have a beautiful moment in her honor and capture it with an image we can all share.

We would also like to extend our profound gratitude to the staff at Mineral Springs Hospital, whose grace and compassion brought our mother so much peace and comfort in her final days.

Due to COVID-19, Vivian’s Celebration of Life will be postponed until a more traditional social gathering befitting such a beloved personality can be arranged.