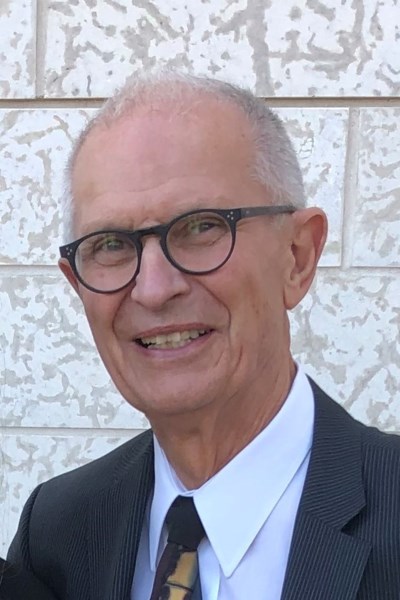 Gary led a truly remarkable life.  Our dad’s life was defined by his ceaseless sense of adventure, calculated risk taking, keen interest in all those around him, silly sense of humour, love of the outdoors, a tireless work ethic, a perpetual commitment to fostering new and maintaining existing connections with family and friends, a nonstop thirst for learning and, of course, his loving and gentle ways as a husband, father & grandfather.

Born in Kindersley, SK, and raised in various communities throughout the province, Gary was a Saskatchewan boy at heart. Gary moved from Regina to Winnipeg part way through his grade 12 year and then attended the University of Manitoba, where he earned a Bachelor of Science degree (Honours) in Mathematics.  For those who knew him, this should not come as a surprise, as he was forever reading books & articles about the latest research and discoveries in the sciences, particularly articles in Scientific American magazine.  Or, he was calculating rather complicated math problems in his head, just for fun.

While at the University of Manitoba, Gary met his future wife, Jean.  They married during Gary’s last year of his studies, on February 1, 1964.  When Gary convocated in the spring of 1964, jobs specific to his Math and Physics education were scarce.  So, when an office position at the Ford Motor Company regional offices in Winnipeg was offered, Gary jumped at the opportunity.  He had always had a love of automobiles and, of course, the intricacies of their engineering and technology.  During his last years with Ford Motor Company, Gary learned of an opportunity to purchase a small dealership in Shaunavon, SK. He calculated the risks, felt it would be a great & fruitful adventure and, in April 1970, Gary became the Ford dealer at Shaunavon Motors.

The family lived in Shaunavon for 11 years, during which time, Gary’s hard work resulted in the expansion of the small Ford dealership to include New Holland and Friggstad agricultural equipment. Gary was very active in the community, volunteering whenever an extra hand was needed, as a member of the local Kiwanis club and as a Public School Board trustee.  He loved those years in Shaunavon & being part of a small community, again. Dad always said that he owed his success to the community. “They were so good to me.  They really wanted me to succeed.”

In 1981, another business opportunity piqued Gary’s interest and sense of adventure.  Gary purchased Merlin Motors (now Merlin Ford Lincoln) and the family moved to Saskatoon.  Knowing that the current location of the dealership was not ideal in the long term, Gary weighed all the facts, possibilities and risks, and purchased some agricultural land, where Merlin Ford Lincoln now sits.  At the time there was no commercial development of this kind in the north end of Saskatoon...no arena, no Costco.  Our family heard many comments about how “Gary Bews was nuts!” to buy land in the middle of nowhere, for his dealership.  The new dealership location was opened in 1985, and the rest is “history”, as that area of the city started to develop soon after.

Gary always made time for vacations and adventures with his family.  When the kids were young, it was camping in an RV. He loved the outdoors!  During the years that Gary was building his businesses, his favorite place to get far away from it all was Hawaii, in particular, Maui.  Much to their delight, time spent on the island of Maui increased significantly for Gary & Jean as they embraced the freedoms of retirement

Gary and Jean also discovered the beauty of Canmore, AB, where they purchased a home in 1997, and where they settled after Gary’s retirement.   Every day, Gary marvelled at the endless stunning scenery and natural wonders of Canmore & area. Gary became an avid hiker -  the longer, the harder, the higher, the better!  He made many new friends through the Canmore Seniors Hiking club, the Meanderthals. Hiking fit well with Gary’s sense of adventure, love of the outdoors & his lifelong commitment to wellness, as he continued to bike, weight train, downhill ski and run until he passed away.

A true wanderer and adventurer, Gary got his first taste of the joys of travel and new experiences as a 19-year-old, when he went, alone, to backpack through Europe. He encouraged his children and grandchildren to seize travel opportunities that would push their comfort zones and open their eyes to new and wonderful landscapes, people and experiences.

From trekking to Mt. Everest Base camp as a senior, to driving “flat out” on the Autobahn, to hitching an unplanned ride on a paraglider in New Zealand, to making unscheduled roadside stops to visit with local farmers during a recent trip to Egypt, Gary seized every opportunity to live and think “outside the box”, in every part of his life.

Though we feel that our dad had many more good years to carry on his great adventures and sprinkle the lives of those he knew and loved with his kind & loving ways, we are comforted by the fact that he truly lived each day to the fullest.

Gary was predeceased by his wife Jean in June 2017.

Gary leaves to mourn his children,

A celebration of Gary’s life will take place once COVID-19 restrictions are eased and allow for large gatherings.