Retired Judge Reilly on justice and respecting web of life 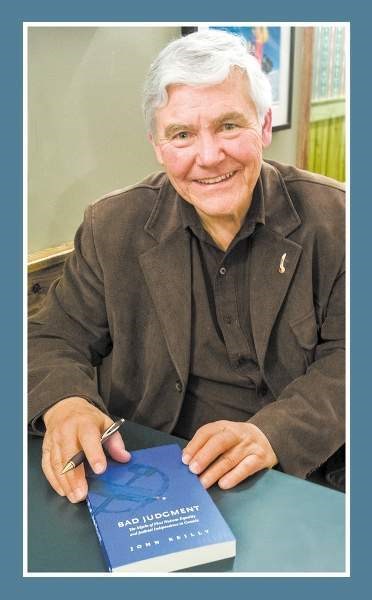 John Reilly will speak about his latest book, Bad Judgment, at Cochrane&#8217;s Nan Boothby Library on May 26.

Since first meeting John Reilly 18 years ago, I’ve followed his thinking with keen interest. The retired provincial court judge for Banff-Canmore-Cochrane has a passion for restorative justice that has compelled him to write two challenging books inspired by his association with the Stoney Nakoda First Nation at Morley.

His controversial first book, Bad Medicine: A Judge’s Struggle for Justice in a First Nations Community, was published in 2010.

A few months ago he came out with a sequel, Bad Judgment: The Myths of First Nations Equality and Judicial Independence in Canada, the subject of his upcoming talk in Cochrane.

But more about that in a moment. First some responses to my April 30 column on saying “Enough!” to mean-spirited hatemongering email forwards that undermine our collective wellbeing as a society.

G. L. “Larry” Spackman, president of the Calgary Council of Christians and Jews, wrote: “I very much agree with your thoughts here. I think the Rotary International guidelines are great. Truth, of course, is the first test, but there are even higher standards to consider. Something can be true and still be gossip.”

Leanne Forest, of Duncan, B.C., agrees. “I appreciate your words, as challenging as they may be, when it’s easier to be silent in order to ‘keep the peace,’ easier to forward an email, rather than return it. I will attempt to live a more authentic, honest life - researching, studying and only then speaking the truth. Thank you.”

Then there’s a conversation I had with motivation consultant Chris Stanley the other day at Cochrane Coffee Traders. Especially concerned over how digital gossip in the social media can smear a person’s reputation to the point of contemplating suicide, he drew my attention to a recent TED Talk by Monica Lewinsky.

Ah yes, Monica Lewinsky, of White House scandal fame because of her relationship with then-President Bill Clinton over 20 years ago.

But facts get so easily lost amidst titillating rumours that destroy rather than heal. Her amazing talk, “The Price of Shame,” can be viewed at ted.com/talks/monica_lewinsky_the_price_of_shame. It’s well worth the time.

On a related matter, there’s the headline topic of Canadian citizen Omar Khadr’s recent release from prison, where he was being held because of his role in a 2002 firefight that killed an American soldier in Afghanistan.

While speaking by phone with John Reilly after Khadr’s release, I asked him whether this was an issue of restorative vs. retributive justice. He responded that it was probably “more political than restorative.”

But he did see in Khadr’s case a reminder of one of his favourite quotes, a statement attributed to Squamish Chief Seattle on the collective importance of reaching out to each other with compassion: “We did not weave the web of life, we are but strands within it. Whatever we do to the web, we do to ourselves.”

Any argument that promotes retribution as a “deterrence” fails to recognize that most people don’t give that a thought when committing a crime, he added. “Deterrence is a myth.”

Which brings me back to John Reilly’s upcoming free public lecture on Bad Judgment here in Cochrane.

While serving as judge, he became aware of the devastating effects of colonialism on the practice of justice, both within First Nations communities themselves, and within the Canadian society as a whole, the subject of his first book.

In his commitment to fairness within the web of life, he ran into conflict with the Canadian judicial administration and some First Nations leaders, the subject of his second book.

The widely acclaimed former judge will be speaking at the Nan Boothby Library, 6:30 pm. Tuesday, May 26.