The biggest challenge that came with spending two full days and nights in a tiny trailer up at Fortress Mountain during the biggest rain/snowstorm of this spring season, said Hilary Smith, was the lack of sleep.
0
May 30, 2019 12:00 AM By: Lynn Martel 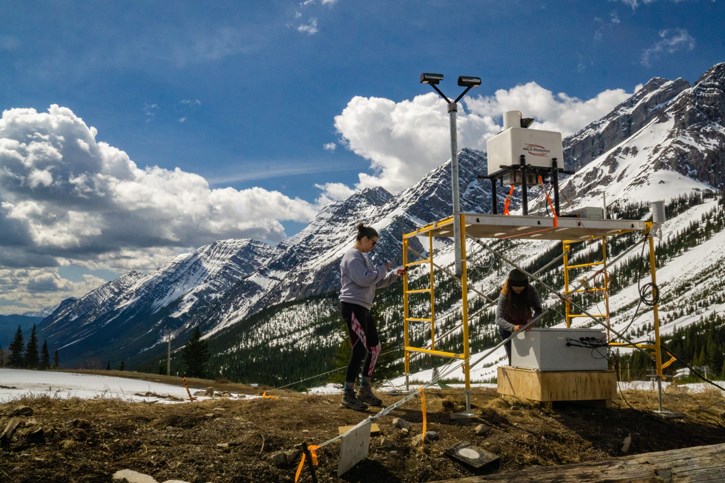 Researchers Hilary Smith, left, and Juris Almonte monitor their instrument station at Fortress Mountain as part of the SPADE project.

The biggest challenge that came with spending two full days and nights in a tiny trailer up at Fortress Mountain during the biggest rain/snowstorm of this spring season, said Hilary Smith, was the lack of sleep.

Making sleep extra difficult, added her colleague Juris Almonte, was the fact their sleeping bags were rolled out on top of thin mattresses on the hard floor of the trailer underneath the table where their computer was stationed.

“Given there were four of us in the trailer, space was pretty tight,” Almonte said. “When people were excited about different types of snowflakes, or something interesting would happen, it became very difficult to sleep.”

The two women were part of a team of 10 grad and undergrad students working under lead scientist Julie Thériault, associate professor at UQAM’s department of earth and atmospheric sciences. Thériault designed the experiment with her collaborators, Stephen Déry from UNBC, John Pomeroy from U Sask and Ronald Stewart from U Man.

The 60-day field project is supported by the Canada First Research Excellence Fund and run under the Global Water Futures (GWF) program. With 39 water-related projects across Canada, GWF aims to deliver risk management solutions informed by leading-edge water science in effort to manage Canada’s water resources into the future as Earth’s warming climate changes landscapes, ecosystems and the water environment.

The SPADE project officially kicked off on April 29, but, with a storm forecasted to begin three days earlier, the researchers had to hustle to get their instruments set up and ready to begin recording data.

They had just enough time to set up two stations in Kananaskis on the east side of the continental divide, one at the Fortress ski area base and another nearby in the valley bottom, before the storm descended. Complicated logistics, especially unavailability of power, meant they were unable to get their third station at Nipika Mountain Resort, on the west side of the divide, up and running in time to record that storm. Since Nipika operates its small rustic lodge completely off the grid, the SPADE team designed their own solar panel system to meet the requirements of their highly specialized instruments. The two Fortress stations are almost identical, while the Nipika one is similar minus a couple of instruments. Data from the instruments is loaded onto a laptop daily, and information from each storm taken on both sides of the divide will be compared.

Various instruments record atmospheric conditions. LiDAR measures the wind by reading microscopic particles in the air and recording their movement, resulting in a 3-D wind profile. Other instruments measure relative humidity, temperature, windspeed and precipitation rate. Some record precipitation intensity and different types, from raindrops to sleet to snowflakes and everything in between. Micro rain radar – MRR – shoots a laser beam straight up to provide information about the fall speed of particles. The one at Fortress takes readings every 200 metres for 30 increments, its range extending six kilometres into the sky.

They also set up a macro camera inside a small ice-fishing tent to record snowflake types and sizes. The researchers catch snowflakes on a black velvet pad, then when they have a single complete flake that isn’t blended into any others, they photograph it under the camera before it begins melting. In the warmer temperatures of a spring storm, they had to move fast. The photographs will be analyzed to characterize the type of precipitation through each storm.

Throughout the duration of the storm (and any storms since then or still to come) researchers were on site the entire time (now at Nipika too), taking turns stepping outside into the wind and precipitation every 10 minutes. They work in pairs for four-hour shifts, taking turns sleeping.

Once every hour they record snow depth and snow water equivalent measurements.

The range and variety of precipitation types during the April storm were astonishing, Smith said.

“It was interesting to see the various shapes of the hydrometeors,” Smith said. “I don’t think that I had ever seen columns or needles. It was very neat to see the particles and try to identify them.”

“We saw columns, lots of bullets, rosettes, stellar, needles, lots of rimed precipitation, multiple types of dendrites – those are what you want for a good powder day,” Almonte added. “What was really surprising was how you could get some heavily rimed hydrometeors mixed with hydrometeors that did not appear to be rimed. Also, the number of dendrites that were asymmetrical, with some of the branches not fully developed were interesting to see.”

While the schedule was gruelling, morale was high, Almonte said. The Fortress caretaker provided much appreciated hospitality – including pizza.

“There was a strong sense of camaraderie, as this was the first official day out in the field and it appeared that we were capturing what would likely be the biggest event of the campaign,” Almonte said.

Throughout their project, the researchers hope to record observations during as many storms as possible. The purpose, Thériault explained, is to learn more about precipitation processes, and how precipitation travels across the continental divide. Questions they seek to answer include how the topography of the area impacts precipitation distribution, and how this might change in the future as the climate warms.

“If there is snow it tends to be transported farther downwind compared to rain,” Thériault said. “If there is a barrier, the trajectory of the precipitation will change. This will influence the side where precipitation falls - snow or rain - and the availability in water resources on either side of the divide.”

The type of precipitation – whether it falls as snow or rain - is also critical, she said. During the severe flooding events that occurred in the eastern Rockies in 2013 rain changed to snow at higher elevations, preventing the water from falling directly into the rivers.

This year’s experiment was built from the results of a smaller one that was conducted in 2015 in the Kananaskis Valley. That study taught them about precipitation types and processes, but it was just a start.

“We learned that the precipitation reaching the surface in the valley was associated with many different types of weather systems and that the particles were very dense - denser than snowflakes,” Thériault said. “We wanted to learn more about those and that is where the idea of studying the precipitation across the continental divide came up.”

While the team hopes their data will lead to a better understanding of why some storms cross the continental divide and others don’t, the experiment is also providing valuable teaching opportunities for Thériault as she works with undergrad students as well as grad students.

“This type of field experiment is not common, and this is unique experience for the students,” she said.