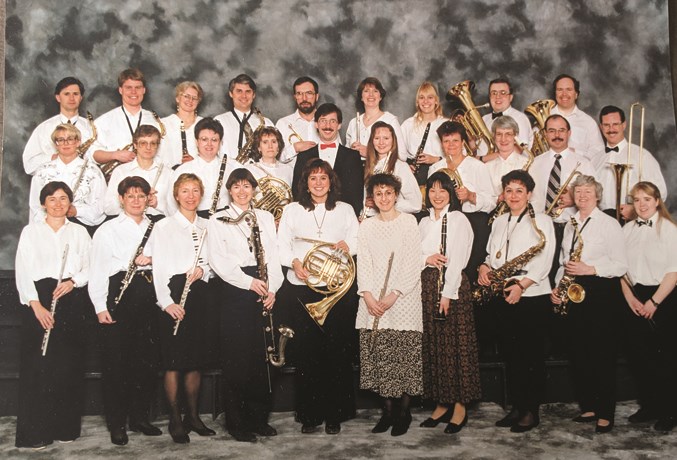 CANMORE – No need to audition – the Valley Winds Association accepts anyone with a pulse and a love for music, even after 25 years.

Celebrating its quarter century anniversary this year, members of the association boast of an inclusive, all-talents, all-ages, community-based group that aims to bring people together with the love of music.

“It has involved this whole community for 25 years in a growing way and in a healing way I would say,” said Karen Wohlfarth, a Valley Winds member who’s partnered with Deb Nettesheim to produce the upcoming spring concert.

Doubling as an anniversary celebration, music lovers may recognize some of the score from previous Valley Winds events.

“This concert’s a special celebration where the songs are a lot of songs that we’ve done over the years so we’re revisiting repertoire from the past,” said Nettesheim.

Wohlfarth and Nettesheim said Valley Winds, which includes choir, concert band and jazz band, has always tried to engage the community with music in a friendly, welcoming manor.

“It takes away the intimidation factor – you don’t have to read music,” said Nettesheim.

“If you like to sing and you just want to join us, please do … All we care about is that it’s a family of people.”

Valley Winds has become a place to call home for many in the community, including those here temporarily, like 14-year-old exchange student Cecibell Ortiz from Spain.

Ortiz said she’s grown up surrounded by music and hoped to also find that in Canmore during her stay. According to Ortiz, Valley Winds was there to itch that scratch and provided more than just a place to sing.

“They are all so sweet, it’s kind of like more of a family than a job,” she said.

“It’s a very cool choir because they’re open to any kind of person, it doesn’t matter if you’re young or old, didn’t matter.”

Valley Winds founder Bob Aishford, who has been with the association for its entire journey, said it all started when he was president of the local Rotary Club in ’94 and was looking for a legacy project.

“The idea was to find adults that wanted a night out, preferably people that maybe had an instrument in their closet, maybe they played in high school and it was time to reconsider making music,” he said.

“We had a couple of simple rules in the beginning – you couldn’t play an instrument you were proficient in, so we were trying to level the playing field.”

Aishford said initially it was just a concert band, but in the second year, the choir and jazz band were added. Eventually membership expanded too – what started out at around 25 members has now grown to almost 150.

Members like Ortiz said Valley Winds has given her the opportunity to share in her passion with more like-minded individuals, reminding her that music is powerful.

“I think music is a way of transferring a message to somebody, it can be a story you’ve read, or your feelings, or your opinion about something that’s going on,” said Ortiz.

The Valley Winds 2019 Spring Concert is on Sunday, April 28 at Eric Harvey Theatre at the Banff Centre for Arts and Creativity. Tickets are $25. You can find out more at www.valleywindsmusic.org.