CANMORE – While the community waits for Three Sisters Mountain Village to officially submit applications for new area structure plans, the developer has also been working on a new commercial subdivision – The Gateway.
Dec 26, 2020 12:00 PM By: Tanya Foubert 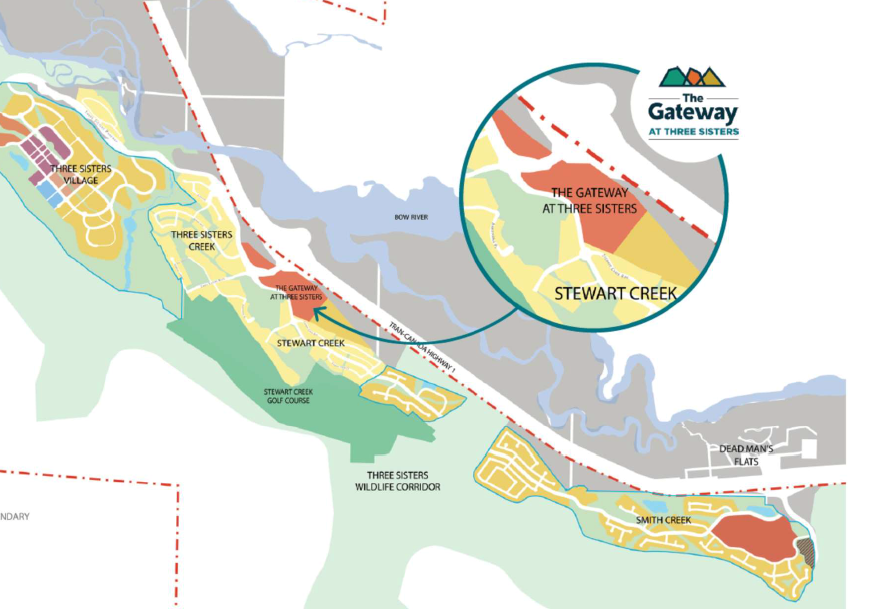 While Three Sisters Mountain Village is working toward submitting two new area structure plans for approval, it also has plans for a new commercial subdivision called The Gateway. SUBMITTED IMAGE

CANMORE – While the community waits for Three Sisters Mountain Village to officially submit applications for new area structure plans, the developer has also been working on a new commercial subdivision – The Gateway.

Three Sisters (TSMV) director of strategy and development Chris Ollenberger provided a brief overview of the new project, located on lands the company owns near the overpass from the Trans-Canada Highway, during a presentation to the Bow Valley Builders and Developers Association (BOWDA).

"The future of Three Sisters represents an opportunity for the Town of Canmore, its residents and businesses," Ollenberger said. "We want to develop a project that is good for the community and good for Three Sisters.

"We want to be the architects of the solutions for Canmore."

He provided some details about the proposed new commercial development, located at the entrance of Three Sisters from the overpass along the Trans-Canada Highway. It is proposed to include office, retail and mixed use spaces in approximately 15 buildings, including the potential for a new grocery store, car wash, gas station and light manufacturing.

He said there is a draft master plan for The Gateway that is still being finalized before it is submitted for approval.

Ollenberger also provided an update on the area structure plans (ASP) for Smith Creek and the Village areas – the last two subdivisions for the developer as per the approvals granted to it in the 1992 Natural Resources Conservation Board decision.

There are a number of studies specific to the two ASP areas that are required as part of the formal application process, including an environmental impact statement, steep creek hazard assessment, area mining impact overview report and an engineering analysis.

"We are looking to make sure we mitigate those hazards that need mitigating, such as steep creeks and undermining," Ollenberger said.

The ASPs are included within global studies related to the overall development, including transportation, socioeconomic and municipal fiscal impact assessments, and a wildfire risk assessment.

Ollenberger said Three Sisters is currently conducting public engagement on the plans and is making tweaks based on that feedback. The company has been doing public engagement work around its future development plans since its current ownership group acquired it out of receivership.

Themes heard by the developer during that work include affordability, wildlife, mobility and future commercial spaces. Ollenberger said with respect to the draft ASPs, feedback has focused on the need for community spaces, concerns about undermining, esthetics and mitigation for natural disasters.

He said the ASPs are heavily reliant on the policy direction established by town council in its various plans and approved legislation.

"We are really following along with the vision and direction of the Municipal Development Plan (MDP), Canmore's economic development strategy, the integrated transportation plan, climate action plan and utility master plan, as well as the 2019 affordable housing assessment," Ollenberger said. "These things feed into each other and we are trying to make sure we align with all the policies the Town of Canmore has put out there."

The draft ASPs include land use concept maps, which provide a rough idea of where commercial and residential development is proposed, as well as where there is space set aside for recreation and a new innovation district in the village.

The maps include the location of a quarry operation, which sits outside Canmore's currently approved urban growth boundary. Council also would have to amend its MDP should redevelopment of that site occur.

TSMV already has an approved ASP for the village centre area, which included a second golf course. However, TSMV decided several years ago to move away from those plans, instead pushing ahead with using parts of the unfinished golf course for future development within the resort village.

"Smith Creek is a little bit different from the Village," he said. "It is intended to be a vibrant, cohesive and comprehensively planned as well, but it is a bit more of a local focus and a more quiet area with a new school site in the centre of it as well."

Within the Three Sisters Village area, there are approximately 3,000 to 5,000 units proposed for residential, hotel and visitor accommodation development. That translates into a population of 5,800 to 10,000 at maximum occupancy. There is also 188,000 square feet of indoor recreation space, 602,000 square feet of retail and commercial, and 21 hectares for municipal reserve.

"There are no single-detached homes proposed in the Village, while semi-detached homes will only be used for slope adaptive development purposes," he said. "The Village Centre ... is envisioned as a vibrant, pedestrian centred area with homes located above stores and restaurants, a landmark hotel, plazas and patios, are all envisioned in this area."

Smith Creek is proposed to include 800 to 1,700 residential units with a permanent population range of 2,200 to 4,500. There are also plans for flexible commercial and industrial development, as well as a school site. It would reach all the way to the interchange for Dead Man's Flats on the Trans-Canada Highway, which is also slated for replacement by the provincial government.

"It is envisioned that about 70 per cent of the dwelling units will be low-density in the form of single detached, semi-detached and townhomes," Ollenberger said. "The other 30 per cent will be medium-density housing in the form of townhomes, stacked townhomes and apartments.

"About 15 per cent of Smith Creek will be open space, which is being used to retain topography and a passive trail recreation system."

TSMV has conducted an economic impact assessment for its proposed development. It estimated the direct, indirect and induced impact to the gross domestic product for the community will be $165 million. The developer estimated it would also result in 2,300 jobs and $95 million in income for residents.

"This is a big project, it is a meaningful one for Canmore," Ollenberger said. "It will be built over the course of about 30 years, is our vision."