The fate of the Stoney Nakoda youth who was accused of shooting German tourist Horst Stewin in the head last August has been reserved until October.
Aug 28, 2019 3:45 PM By: Jenna Dulewich 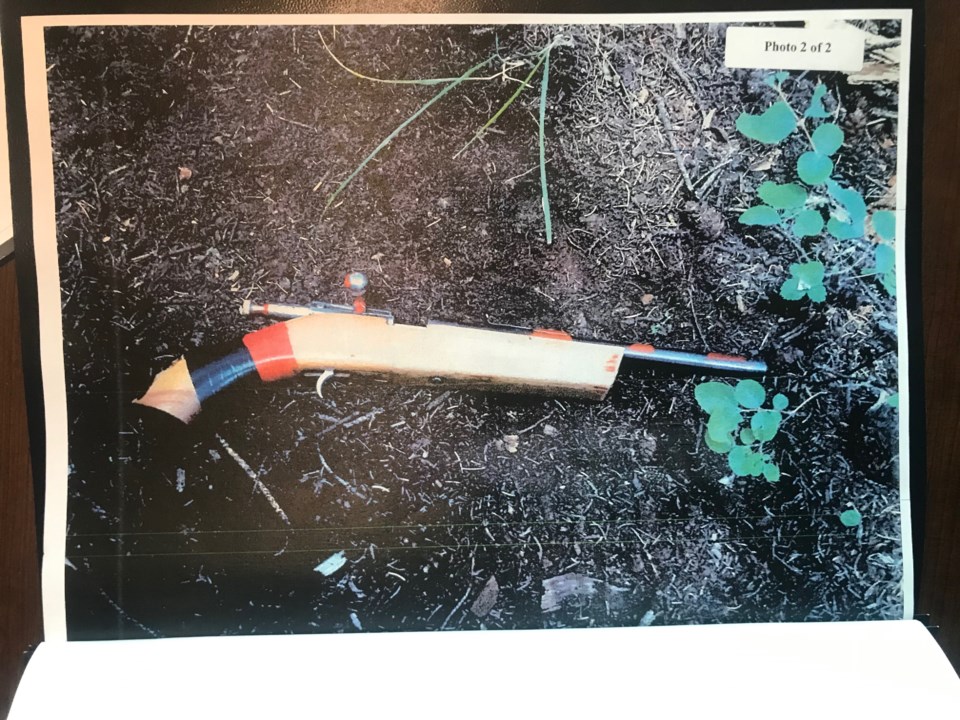 The seized rifle entered as evidence in the Horst Stewin shooting. An expert in forensic firearms, Lauren Black, confirmed one of the bullet fragments removed from Stewin's brain were consistent in size, composition and design with a fragment of a fired .22 short, long or long rifle bullet. SUBMITTED IMAGE

CALGARY – The fate of the Stoney Nakoda youth who was accused of shooting German tourist Horst Stewin in the head last August has been reserved until October.

“This is a very difficult case and I do think contextually is how I have to look at the evidence,” Judge Gaschler said.

The youth was originally charged last summer after Stewin was shot when driving on Highway 1A between Canmore and Calgary.

During the closing arguments the Crown argued “all the evidence support the accused as a shooter” while defence lawyer Der argued the key witnesses were “exposed in cross examination.”

“They said things that couldn’t make sense,” Der said during his closing argument.

Originally scheduled for two weeks, the trial only lasted four days with the Crown calling two witnesses who were in the vehicle with the youth during the time of the 2018 incident.

Both gave conflicting testimony as one witness said her cousin told the youth to shoot, while the other witness admitted the group was intoxicated with alcohol and methamphetamine but said he did not tell anyone to shoot.

Stewin was driving the vehicle with his wife Ulrike Stewin, his son Daniel Stewin and Daniel’s girlfriend when he was shot.

Ulrike told the officer the shot came from the front window and described the shooter as Caucasian, 30 to 40 years old while the accused is Indigenous, was 16 years old at the time of the shooting and sitting in the backseat on the driver’s side.

The family was scheduled to testify from Germany via closed-circuit-television (CCTV) on July 17 during the four-day trial but after issues with a translator arose and not being able to secure another one in time, the Judge opted to enter their roadside statement into evidence instead.

“I look at my dad and he was sitting with like with his head down, and I thought what the hell ... we drove through this field and I tried to get the steering wheel clear so we don’t drive into the wood and I tried to brake but I couldn’t,” Daniel said in his roadside statement.

“My mom and girlfriend, they were shouting and crying and I tried ... but I couldn’t handle it and we drove into the woods.”

The Crown noted the other inconsistencies with Ulrike’s statements including describing a different vehicle than what the accused was riding in and a different gun than what was seized.

“It’s a clear example of someone being honest but just wrong in a stressful situation,” Rolfe said.

Horst, who was in Canada to celebrate his 60th birthday, spent close to two weeks in the Foothills Medical Centre in Calgary after the Aug. 2, 2018 incident before being transported back to Germany for brain surgery.

During their roadside statements, the family said they were looking for a ranch and did not realize they were on Stoney Nakoda First Nation lands.

Daniel said he thought the sound of the gunshot was a blown tire at first.

“I heard this noise, me and my girlfriend, we thought it was a tire or something. And I looked at my dad and he was sitting in his chair, his head down, he was bleeding hard. And I was ... oh my God, I have to do something,” he said.

“His prognosis for full recovery is guarded, at best.”

The youth, who was 16 years old at the time and cannot be identified under the Youth Criminal Justice Act, was originally charged with 14 charges but a couple months before the trial the Crown withdrew nine charges including attempted murder after determining a conviction would be unlikely in the charges that were dropped.

The Crown continued his case against the youth with charges of aggravated assault, assault and three counts of discharging a firearm with intent under the Criminal Code.

A decision is expected in late October.