Emergency services in the Bow Valley proved to be fast-acting on Sunday when two accidents happened within an hour and a half from one another.
Aug 19, 2019 6:53 PM By: Alana MacLeod 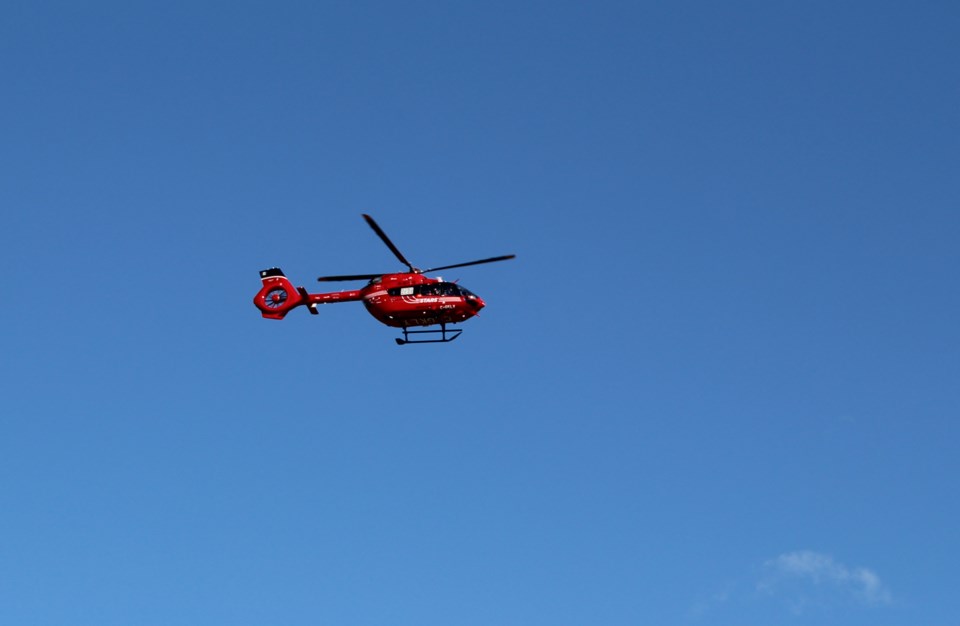 STARS in one of its new H145 helicopters flying away with a patient after a motorcycle accident near Stoney Nakoda Resort and Casino. ALANA MACLEOD RMO PHOTO

BOW VALLEY – Two separate motorcycle accidents required a STARS air ambulance to airlift two patients to hospital within an hour-and-a-half from one another earlier this week.

Emergency services proved to be fast-acting Sunday (Aug. 18), with the first incident happening around 2:40 p.m. and the second around 4 p.m.

Stuart Brideaux, a spokesperson for Alberta Health Services (AHS), said the first incident happened near the Sheep Falls day use area when a motorcyclist in his 30s lost control of his bike.

“A male in his 30s, who was out with other riders but the accident was unwitnessed due to the curvature of the roads, he lost control of his bike,” said Brideaux.

According to Brideaux, STARS was requested by first responders in the area and the man was flown to Calgary Foothills Medical Centre in serious condition.

While STARS transported him Sunday afternoon, a second motorcycle accident occurred. Brideaux said this motorcyclist in his 50s also lost control and ended up in the ditch along the Trans-Canada Highway near the Stoney Nakoda Resort and Casino.

“They transported the first male to the Foothills and while they were doing that, they were pre-alerted to another call,” said Yamkowy.

STAR 1 (Calgary) has been dispatched for a Scene Call Emergency in the Turner Valley, AB area.

Yamkowy confirmed STARS transported a 33-year-old male and a 56-year-old male to Foothills after the two separate motorcycle incidents.

STAR 1 (Calgary) has been dispatched for a Scene Call Emergency in the Stoney Nakoda Reserve, AB area.

She said the two new helicopters added to the STARS fleet in April make quick turn around like this possible.

“The new helicopters we have, the H145, have a little bit more speed and range than our BK117s so they were able to do some quick staging at the Foothills. We keep some supplies there in a cupboard by the heliport on the roof so that we can replenish anything we need to,” she said.

“Then we actually waited a few minutes for EMS to arrive at the scene and provide an assessment to us to confirm that STARS was required, and then they quickly headed out to Stoney Nakoda and landed at the helipad near the casino there and picked up the second person.”

The two new helicopters, H145s, just went into operation in the middle of July and Yamkowy said STARS is in the process of renewing its entire fleet with the next base being Saskatoon.

In terms of this type of turn around, she said it’s not uncommon for the medical helicopters.

“It happens frequently ... whether we quickly replenish here or we do it here, both situations do occur enough that we have a system set in place so we can make that happen,” she said.

“Summer is our busy time so we just encourage people to be safe.”