Offering the opportunity to work on life skills, while promoting physical activity and giving back to the community, the previous captain said it was a very difficult decision to step down and she was hopeful to see the program continue
Nov 19, 2019 12:07 PM By: Jenna Dulewich 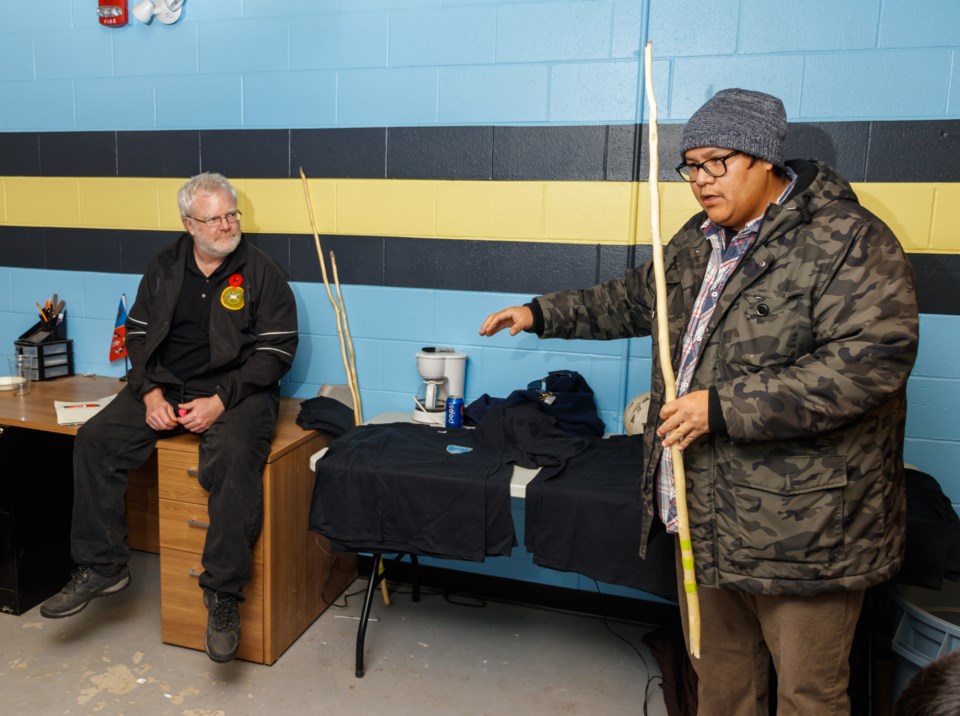 STONEY NAKODA – Can you use a flamethrower on a bear?

Not a question you hear every day, but it was one posed to the recently reignited Stoney Nakoda Cadet Corps Thursday (Nov. 7).

About half a dozen 12 to 13 year olds sat in a circle in the old Morley gymnasium, as the new cadet corps volunteer Tasina Pope invited community members to speak and share their knowledge, including Trent Twoyoungmen, who gave a crash course on firearm safety.

Quizzing the new cadets about if you can shoot an animal on a hill, which gun to use for hunting deer and when and where to use a flamethrower, the youth sat listening attentively for half an hour, as the instructor used wooden sticks as imaginary firearms and flamethrowers.

“Why do we hunt?” Twoyongmen asked, listening to a couple of the answers before continuing. “Because it is a cultural identity – deer, moose, buffalo, grouse, that is what we used to live with and off of.”

Touching on the importance of culture and heritage, Twoyoungmen also explained that while hunting licences were not required for Indigenous people with status, as the provincial and federal law states, it is important to still be responsible hunters and to only hunt for sustainable purposes – joking that squirrels were no good to eat, but that grouse is almost better than KFC.

After his presentation, Twoyoungmen said he is excited to see the cadets program continue after the uncertainty earlier this fall when the two captains announced they were stepping down from the program.

Introduced on the Nation in the early 2010s with strong support from the three bands, Bearspaw, Wesley and Chiniki, the Nation elders, community members and the Community Tripartite Policing Agreement (CTA) members – the Stoney Nakoda Community Corps program began as a way to give the youth something to do.

Offering the opportunity to work on life skills, while promoting physical activity and giving back to the community, the previous captain said it was a very difficult decision to step down and she was hopeful to see the program continue.

“I think because there is no word for goodbye in the Nakoda language, my farewell to them would be, keep looking forward, don’t doubt yourself, thank you for the lesson you taught me and never give up,” Captain Raquel “Rockie” Schmaus previously told the Outlook.

Determined to not let the program fade out, after less than a month of searching for a new captain, the CTA members, Const. Jennifer Brewer and Const. Dave Cardoso secured Nation member and veteran Pope to help takeover the program.

“I thought, if I love my youth and if I love volunteering, then it was time to volunteer again,” Pope said with a smile.

Wanting to help showcase the opportunities on and off reserve, Pope said the youth are not always aware of the resources they have access to and she wants to help highlight that.

“There is the opportunity to train youth to be positive shit-disturbers,” Pope said with a laugh.

Named as one of the Outlook's Nakoda's Next Generation of Change Makers in 2018, Pope was recognized for her volunteer and advocacy work for Indigenous sustainability and inclusiveness and she wants to help the next generation realize their full potential.

“I want to see them get opportunities,” she said in-between drills.

Only the third or fourth meeting since the program was restarted, the youth sat quietly, as well-known elder, and Pope’s grandmother, Una Wesley shared her words of wisdom before performing a smudging ceremony for the new cadets.

Asking the preteens who knew the traditional language, Wesley spoke of her time in residential school and touched on the importance of keeping the language and culture alive.

“You kids are fortunate, we never had RCMP come talk to us – we used to see them as bad but now [Jennifer] is like my daughter,” Wesley said.

“You are growing up fast, make sure to educate your mind and heart.”

One of the cadets said they are excited to see the group grow.

“I like it a lot this year,” said Jaime Mark, 14-year-old Stoney Nakoda cadet, who was enrolled in the program last year.

Now with the new captain volunteer and youth checking out meetings, the next step is funding, Const. Brewer said.

So far, Stoney Education Authority has helped offset costs with the basic transportation, gas fees, and the first purchase of black, Cadet T-shirts, with additional help from Ink'd Graphics from Cochrane.

Now organizers are looking into grants and other fundraising opportunities to expand the program, Brewer said, with hopes for special activities, achievement awards and cultural excursions – for example, travelling to an elder’s trap line and potentially camping overnight.

“Right now we are looking for community involvement and exploring our grant and fundraising opportunities,” Brewer said.

Community members are encouraged to donate their time to help the new group or share their knowledge, as Twoyoungmen did at the November meeting.

And no, you cannot use a flamethrower on a bear, he said.

For more information on how to join or help, visit the Facebook Page at Stoney Nakoda Community Cadets Corps.

The Stoney Nakoda Community Cadets Corps meets every Thursday from after school until 6 p.m. at the old Morley gymnasium.