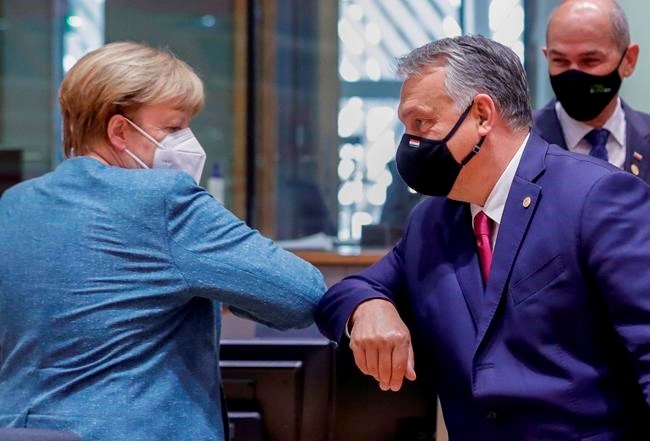 BRUSSELS — European Union leaders agreed early Friday to impose sanctions on dozens of senior officials in Belarus accused of falsifying presidential election results and leading a crackdown on peaceful protesters, after unblocking a veto against the move by one of the EU’s smallest member countries.

In an embarrassing standoff, Cyprus had insisted that its EU partners take action against Turkey for its energy exploration work in disputed waters off the Mediterranean island nation’s coast before it would agree to the Belarus sanctions.

But after several hours of talks into the night, the leaders agreed on a strong statement of support for Cyprus, as well as for Greece, and a stern warning to Turkey that it could face punitive measures if it continues the undersea drilling work.

“We have to decided today to implement the sanctions," European Council President Charles Michel told reporters after chairing the summit in Brussels. “It’s very important to do what we decided a few weeks ago,” and to send a signal that “we are credible.”

Michel said that a special written procedure would be launched on Friday to impose sanctions on about 40 Belarus officials.

Belarusian President Alexander Lukashenko "is not on the current list. But we will follow the developments," Michel said. The leader once dubbed Europe’s last dictator could be added to the list at a later date, should he refuse to enter into talks with the opposition, EU diplomats have said.

The political row has tarnished the EU’s image. It is also unusual in that all 27 EU member countries, including Cyprus, reject the result of the Aug. 9 election that returned Lukashenko to power for a sixth term. They all want a new election and agree that sanctions should be slapped on several officials.

Ahead of the summit, Dutch Prime Minister Mark Rutte said “it is bad that we cannot make it work.”

"A link between Belarus and Turkey is political only, and has no explanation when we assess the facts,” Rutte said. “What we need to achieve in the coming hours is a decoupling, while we have to recognize there are legitimate concerns about Turkey.”

Throughout Thursday evening, the leaders debated what approach to take in the EU’s increasingly tense ties with Turkey over its drilling in the Mediterranean Sea, its roles in the conflicts in Libya and Syria, and as a sometimes troublesome source of migrants trying to reach Europe.

“It is now Turkey that has to prove that it wants to go the constructive road with us, and this is the offer tonight. But we are very clear that in the opposite case we have all necessary tools at our disposal,” European Commission President Ursula von der Leyen said after the meeting.

French President Emmanuel Macron was staunch in his support for his European partners, saying that “solidarity is non-negotiable” when it comes to Cyprus, but also to Greece in its long-running dispute with Turkey.

“When a European Union member state is attacked, threatened, when its territorial waters are not respected, it’s the duty of Europeans to show their solidarity,” Macron said.

As it turned out, Cyprus was making its stand at a summit that came on the 60th anniversary of its independence.

In a televised address to the nation, Cypriot President Nicos Anastasiades expressed his “sincere gratitude to all European Union member states for their staunch support and solidarity in light of Turkey’s provocations.”

But Anastasiades said he wanted the EU to take “a more tangible and effective stance to bring about an end to gunboat diplomacy and for the crisis to be succeeded by dialogue or recourse to the international court on the basis of international law and the law of the sea.”

Making the same point, Greek Prime Minister Kyriakos Mitsotakis said, “the time has come for Europe to discuss with courage and honesty what kind of relationship it truly wants to have with Turkey. One thing is certain: Turkish provocation, whether this is expressed through unilateral actions or extreme rhetoric, can no longer be tolerated.

In Ankara, meanwhile, Turkish President Recep Tayyip Erdogan described his country’s operations in the eastern Mediterranean its most important “naval struggle of the past few centuries.”

During a speech in parliament, Erdogan said the EU had turned into an “ineffective, horizonless and shallow” structure and become a “slave to the conceit” of Greece and Cyprus. However, he also said that Turkey is committed to resolving disputes through dialogue.

Raf Casert in Brussels, Elena Becatoros in Athens, Menelaos Hadjicostis in Nicosia, Cyprus and Suzan Fraser in Ankara contributed to this report.