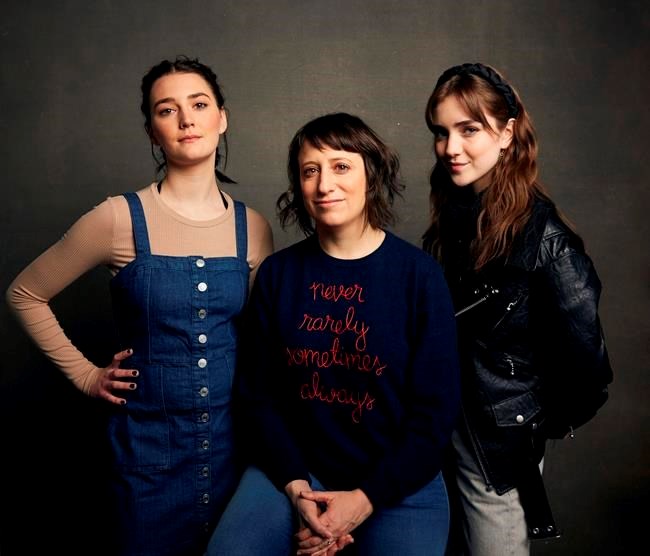 NEW YORK — Even progressively minded movies about abortion have usually focused on the morality of the decision. Eliza Hittman wanted to make a film where the highest hurdle isn’t deciding to have an abortion. It’s getting it.

“For me, it was about the obstacles. I think a lot of films focus on destigmatizing the abortion,” says Hittman. “They show it as a need and a necessity of woman’s life, but they don’t show how hard it is for the majority of women in this country to access them.”

“Never Rarely Sometimes Always,” Hittman’s third feature film, is about a 17-year-old named Autumn (Sidney Flanigan) who can’t get an abortion in her rural Pennsylvania town without her parents’ permission. She and her cousin, Skylar (Talia Ryder), scrap enough money together to take a bus to New York City to get the abortion she’s seeking. Their odyssey traverses not just the byzantine state-to-state restrictions that can surround abortion, but a broadly fraught landscape. The two young women, in unspoken solidarity, make their way through a world of male harassment, from slight gestures to more heartbreaking encounters.

“I wanted to put the audience in the shoes of a young woman navigating a hostile environment, and all the ways in which men, whether they know it or don’t, can cross a line,” Hittman said.

Hittman was speaking in an interview in Manhattan alongside Flanigan and Ryder in early March. The movie was days away from opening in , the culmination of an acclaimed festival run that began with rave reviews out of its Sundance premiere (where Hittman’s direction was also for its neorealism) and was followed by winning the Silver Bear prize at the Berlin Film Festival.

By then, an ominous feeling had already settled over New York because of the coronavirus. Everyone greeted with pointed elbows or a wave. Hittman, a native New Yorker, was having a hard time imagining her city self-isolating. “Never Rarely Sometimes Always” opened in a few that weekend, but like other March (and April, May and June movies), its release was soon .

On Friday, Focus Features will debut “Never Rarely Sometimes Always” on on-demand. The quick digital release brings one of the spring’s best films into homes eager for entertainment, but also into a challenging environment for a quiet film, without stars, that builds its considerable power patiently through an accumulation of sharply observed details.

“The dependence on word of mouth is as critical now as it was before,” said producer Adele Romanski (“Moonlight”), in a phone interview with fellow producer Sara Murphy. “It’ll just have to be over Zoom and not over a cocktail.”

“Hopefully we can continue to talk about the film and the importance of the issues in the film that are still relevant, even more so today as people are talking about whether abortion is an essential medical procedure,” Murphy says.

During the pandemic, some Republican-led states have deemed abortion a “non-essential” procedure. On Monday, federal judges blocked those restrictions and set future arguments to be heard by video conferencing.

Last year, states including Georgia, Alabama, Louisiana, Missouri and Mississippi introduced bills that would ban most abortions. In some states, efforts are increasing to roll back the landmark Roe v. Wade decision by bringing abortion arguments to a Supreme Court populated by new conservative appointees. Last month, the Supreme Court heard arguments over a Louisiana law that would require doctors to have admitting privileges to local hospitals, a regulation that could severely limit abortion access.

“It’s ironic that it’s being called ‘privileges,’" says Hittman before alluding to her film’s title. “I see it as it pertains to the larger conversation about abortion in this country where people, men, try to decide under what circumstances a woman should have access. I think it’s always.”

Hittman had long considered making a movie about abortion but was emboldened after the election of Donald Trump and the experience of attending a women’s march at Sundance. She began by looking for the closest pregnancy care in a more restrictive state. She drove out to Pennsylvania. “I wanted to see it to believe it,” she says.

“Never Rarely Sometimes Always” has drawn comparisons to the celebrated Romanian film “4 Months, 3 Weeks, 2 Days,” about a woman seeking an illegal abortion. Hittman appreciates that film but takes issue with its depiction of a pregnant woman.

“She’s represented as being careless and naive and she’s shamed and judged,” says Hittman. “But it’s a masterpiece. It’s a male masterpiece.”

The perspective behind “Never Rarely Sometimes Always” is plainly different, and it's one shared by its young protagonists. Both are acting in their first film, both natives of Buffalo, and both have been hailed as breakthrough performers. They giggled their way through their first, private screening of the movie, but Flanigan, 21, cried when she saw it at Sundance.

Ryder is 17, and realizes if she lived in Pennsylvania, she could be in Autumn's situation. After screenings, she's been approached by some mothers who tell her: “After seeing this, I just want my daughter to know I’m there for her and that she can talk to me.”

“Never Rarely Sometimes Always” is rated PG-13, meaning teenage girls can watch it on their own if they want to. Hittman says the Motion Picture Association said if she removed just two expletives, it wouldn't receive an R rating.

“I think it was always my dream to make smart, artful films for young people,” says Hittman. “There are a lot of commercial films in the world that don’t really represent what it’s like to be a young person in the world every day.”