Cochrane RCMP officers are building relationships in Morley on a daily basis and those interactions go well beyond simply policing crime.
0
Jul 20, 2017 12:00 AM By: Jenna Dulewich 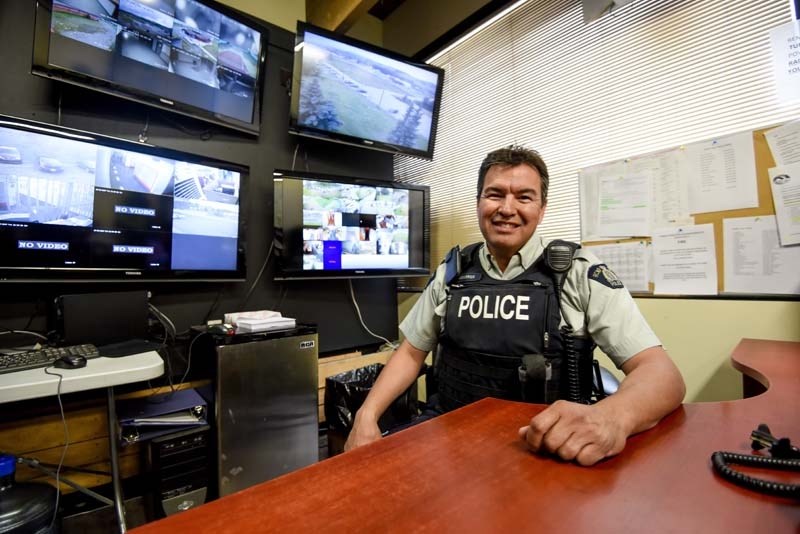 Cochrane RCMP officers are building relationships in Morley on a daily basis and those interactions go well beyond simply policing crime.

“Hey, can I ask you something quick?”

It was the phrase from three different people in a matter of 15 minutes during Const. Don Vanderrick’s visit to the Stoney Tribal Administration building on a Wednesday early afternoon.

Vanderrick took the time to talk to each and every person he met that day, fielding questions that ranged from asking about trespassing and theft to sensitive questions shielded from other ears. The officer would offer solutions and propose to meet for coffee or tea at a later date to continue the discussion.

“As a First Nations person, people always want to talk to me,” Vanderrick explained as he walked back to the RCMP vehicle to carry on to the next daily check-in.

“I am always thinking outside of the box – trying to get kids away from drugs, from gangs, from bullying. I try to give them something positive,” Vanderrick said.

Like any other community, the Stoney Nakoda First Nation – including Bearspaw, Wesley and Chiniki bands – has its issues ranging from housing, poverty and addictions, to domestic assault and homicides.

In the three years Vanderrick has served on the Nation he has stayed true to his goal of community building. His efforts include reinstating the Morley Cadets program two years ago that he calls “his baby,” working with youth to create anti-drug and anti-gang videos, and attending all community meetings, graduations and funerals just to be available to talk.

“People ask for him, they trust him. He is someone on the side always advocating.”

Working in a position where dedicated members are meant to devote 100 per cent of their working hours to policing the needs of the First Nation, Vanderrick said it is his job to keep his “hand on the pulse.”

“You need to be the jack of all trades,” Vanderrick explained after agreeing to help a Nation member fill out a firearm application.

Const. Dave Cardoso, the second CTA officer, said every day on the job is different.

“I usually check in at the band office, sometimes people come up and ask questions, sometimes I pick up hitchhikers, every day is like a snowflake – unique,” Cardoso said.

Working five days a week alternating morning and evening shifts between the two officers, there is a noticeable police presence on the Nation.

“It is an extra sense of security and support,” explained Jennifer Sachkiw, executive director with the Cochrane and Area Victim Services Society who was stopping in the Eagle’s Nest Stoney Family Shelter.

Cardoso said he usually checks in to the majority of the main buildings in the town site to see if there are any concerns or problems throughout the day.

“Find a need – fill a need. Our main directives are youth and drugs,” Cardoso explained.

“We are not really seeing fentanyl, but we are seeing meth (and) issues with alcoholism and prescription pills.”

In 2016, the Nation had declared a state of emergency concerning drug use that was later called off by acting Stoney CEO Ken Christensen. Declared or not, Cardoso and Vanderrick have acknowledged there is a higher number of unnatural deaths on the Nation due to drugs, alcohol and crime.

“You can tell how many people have died recently because of how white their cross it,” Vanderrick pointed out at the Chiniki cemetery.

“It’s hard to get to know these people then they are just gone.

“I’m always researching and my mind is always going … and I’ve been trying to focus on not taking ownership of the programs so they remain sustainable.”

Introduced to Alberta in 1989 through the Blood Tribe Policing Agreement, the CTA partnership in Morley was initiated four years ago and is up for review in 2018. Vanderrick said that CTA positions across Canada have been dissolving across Canada but he hopes to keep working with the Nation.

“I don’t think they’ll get rid of it,” Vanderrick said with a smile.

“I try to keep my ear to the ground.”