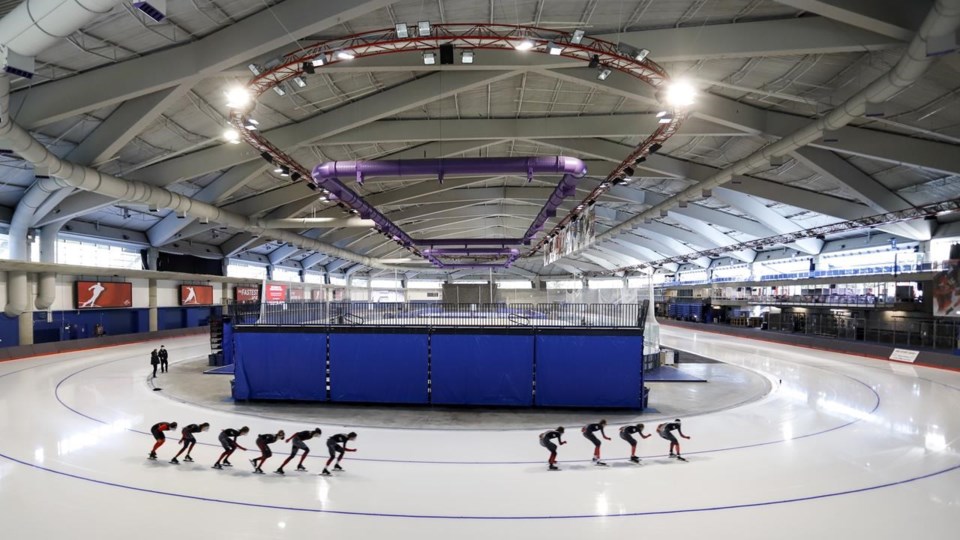 CALGARY — Canada's top speedskaters have started getting back to normal after a double-whammy winter of a pandemic and no ice in Calgary's Olympic Oval.

The reinstalled ice, after a hiatus of almost nine months and the lifting of some COVID-19 restrictions in Alberta, got the national long-track skaters back circling the Oval this week, albeit wearing masks.

With the 2022 Winter Olympics in Beijing coming over the horizon, the athletes relished familiar training after constant adaptation.

"I'm really happy to be skating again," Bloemen said. "It's been building. We were doing dryland training in the Oval and we saw them making the ice for a couple weeks already.

"I'm just really happy they were able to fix the problems and make ice again early for us in the summer."

The Oval, built for the 1988 Winter Olympics in Calgary at a cost of $40 million, has been not only the home of the national long-track team for its 33 years, but is also used by provincial, university and community sports teams and groups.

International speedskating teams often hold training camps there because of the Oval's elevation, fast ice and location on the University of Calgary campus.

Problems with the ice plant's heat exchangers, or chillers, cropped up a few years ago. A repair in 2018 didn't resolve the issue. Leaks in both chillers were discovered again last year.

"We didn't have the confidence it would have been a long-lasting solution," he said.

"If we'd taken the same answer to the problem, it could have been a ticking time bomb. In managing that risk, we needed to come up with a new product and one that wasn't as obsolete as the last one."

A new type of chiller was required, which took months to produce, deliver and install.

"We had to shut the whole place down," said McCrory.

The ice went out of the Oval in early September and was reinstalled in late May. The cost of the new equipment was just under $1 million, McCrory said.

Provincial pandemic restrictions would have taken the speedskaters out of the Oval for chunks of the season, but no ice for months was even more limiting.

The long-track team's 2020-21 season was a hodgepodge of short-track training in Calgary, skating on frozen mountain lakes and an outdoor oval in Red Deer, Alta., and a two-week camp in an indoor oval in Fort St. John, B.C.

"I think what we showed when we went to World Cups — we were thinking we were ill-prepared — is how skilled and deep our team is," Calgary sprinter Gilmore Junio said.

"I don't think we're behind at all. I think we're in a great position to really challenge for medals at World Cups and at the Olympics coming up."

Laurent Dubreuil won men's 500-metre gold and 1,000-metre bronze at the world championship. The long-distance skaters felt the lack of reps more than the sprinters.

Bloemen, who helped Canada win men's team pursuit silver at the world championship, finished off the podium in the 5k and 10k.

"For the long distances, we need to be really efficient and use low energy when we're skating those lap times," he explained.

"You just need to be on the ice and make it natural in order to do that and we missed that last year.

"I think you have to look at it as it's a new season and this season, we're able to prepare ourselves just like any other year. We're on the ice in June now and we'll be able to skate almost daily."

The Oval is scheduled to host a World Cup in December and was recently named the site of the 2024 world championship.

"We're well past our expiration date, but credit to the people who have worked here and taken care of the building quite well. We're getting excessive amounts of time out of it," he said.

"We've got pipes that have been in the floor for 34 years. It's usually a 20-year span for the floor. We're running on borrowed time for some things."

"This is an old building. It is still No. 1 in the world. It is still world class," said Le May Doan, who will be the Canadian team's chef de mission in 2022.

"We need to make sure this building goes beyond the next few years."

Winnipeg speedskater Heather McLean felt a surge of emotion stepping back onto Oval ice after months off of it.

"I even get chills just thinking about it," she said. "Growing up, I dreamed of coming to skate here, live here, and train with the national team.

"It really has a piece of my heart."

This report by The Canadian Press was first published June 11, 2021.