“Most people who go into the mountains are going in to have a good safe day ... Everybody has the same goal, which is getting back to the car safe — I don’t feel like many people in the mountains are being wilfully dangerous.”
Nov 8, 2019 3:00 PM By: Chelsea Kemp 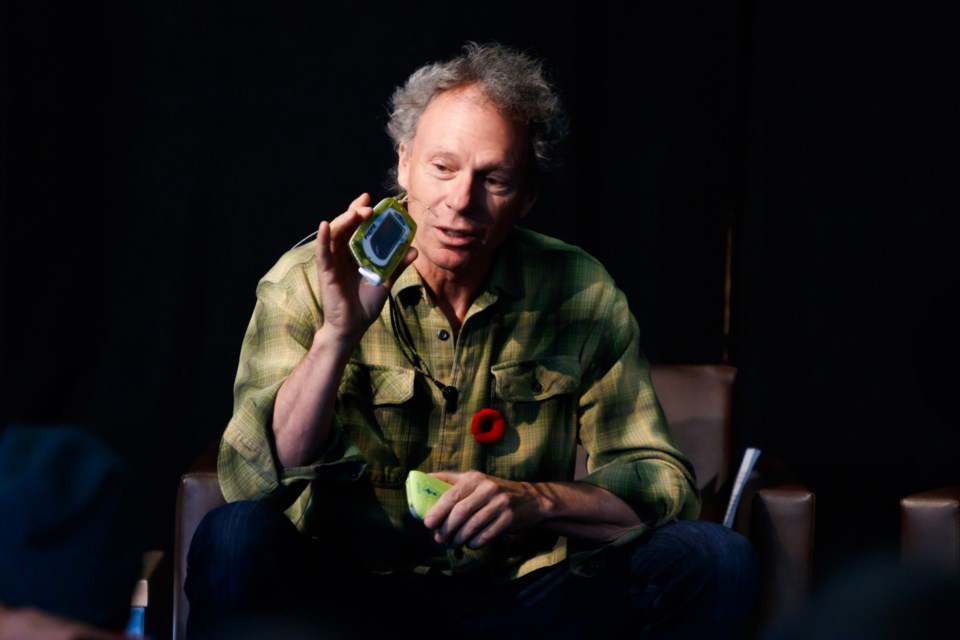 Searching for Climbers panel host Larry Stanier shows different beacons that can be taken out to the backcountry at the Banff Centre Mountain Film and Book Festival on Sunday (Nov. 3). CHELSEA KEMP RMO PHOTO

BANFF – An avalanche barrelling down the side of a mountain slope doesn't know the difference between a backcountry skier or an ice climber, but as more recreational users seek out icy formations to scale, public safety specialists are hoping to reinforce the message that they too should be practicing avalanche safety techniques when they head outdoors.

“Most people who go into the mountains are going in to have a good safe day,” Gadd said. “Everybody has the same goal, which is getting back to the car safe — I don’t feel like many people in the mountains are being wilfully dangerous.”

However, he added, there is room to improve the steps they take to stay safe while climbing.

“I hope that resonates with people and we make better decisions in terms of where we go and how we go there,” Gadd said.

It was important to host Searching for Climbers at the Banff Centre's annual festival dedicated to mountain films and books, he said, because it can showcase a selection of safety steps and potential dangerous situations that often take place behind the scenes when people take on extreme sports in the mountains.

“It is a big back story,” Gadd said, explaining that when he speaks he shows a list of the more than 20 people he has lost in the mountains.

“That needs to be part of the conversation — I need to share that part of my sport and be honest about it.”

The panel was part of Gadd’s continued work to change the culture of how climbers approach avalanche safety, while sharing how his own experience over the last three decades in the mountains with ice climbing, alpine climbing and encountering avalanches has informed his approach to safety.

“It has changed my perception of avalanche gear and risk in the mountains,” he said. “I wanted to share that in a way that will hopefully lead to better outcomes.”

Gadd said he wants to promote an attitude that safety is important to ensure climbers and their friends can have long careers in the mountains.

“Change your goal from maybe the raddest thing you can do that day to having the most number of rad days you can,” Gadd said. “That’s what it’s all about to me.”

During the panel, Gadd highlighted the importance of carrying and wearing beacons to ensure that searchers can find athletes if the worst-case scenario happens and an avalanche hits and having tools such as shovels on hand for emergency rescues.

“A RECCO strip [beacon] weighs as much as a gumdrop,” he exclaimed. “It’s one layer of protection and one layer to reduce the loss.”

He appreciated the questions and engagement from the audience, Gadd said, adding that he hopes the topics discussed will resonate with guests who attended the panel.

Audience member Jim Pissot questioned if the festival should require films to meet safety standards to qualify for awards.

The films have the potential to inspire people to explore the mountains, he said, while promoting safety standards that can save lives.

“The Banff Mountain Film and Book Festival is a great opportunity to do that,” Pissot said. “We’re attracting people who are interested in outdoor adventure … we’re attracting children.”

As a member of the Canmore community, Pissot highlighted the love many in the community hold for Radical Reels night, but raised concerns that the films lacked the context of explaining how creators stay safe through the use of equipment and risk management.

“This festival can be a vehicle to insist that the men and women who are featured in these outdoor adventures are properly equipped and properly trained,” Pissot said. “The festival can inspire every potential entrant here to think about the gear they use, think about the safety message that they’re sending.”

Pissot said he was struck by the story of an audience member at the panel discussion who survived an avalanche near Field, B.C. during a guided tour of Massey's ice climbing route last March. A 47-year-old female ice climber died in the incident, and the audience member's story of the terrifying experience showed the real applications of the academic and theoretical practices that were shared during the forum.

“It was brought home in a serious way,” Pissot said. “Everybody who left this audience today, if they remember one thing, they remember her testimony.”

The goal of the festival is to inspire guests to get out and enjoy the mountains, and Pissot said he finds it encouraging that athletes like Gadd are working to get people out in the backcountry in a safe manner.

“The most important tool in the backcountry is the one between your ears,” Pissot said. “That is the tool that this festival reaches out to and I think that there is a great opportunity here.”

Festival director Joanna Croston said she appreciated Pissot’s comments in regards to promoting safety by implementing safe standards of film making, but added that it would be challenging for the festival to implement a policy of this nature because they do not have the resources to follow up with 450 films to ensure they were created in a safe manner.

“I wouldn’t want to have a festival that would be showcasing only risk-averse activities, or sterilized activities,” Croston said. “The point of our festival is to inspire people, so that would be really difficult.”

The festival has an honour system where they assume people are “doing the right thing” and are “not putting their film crews in danger.” In her experience, this is true in the majority of films.

Croston said she would explore asking the question of safe conduct to films submitted to the festival.

The forum was “an emotional event,” Croston said, and she hopes that will see impacts come out of the discussion.

Croston has been a part of the festival for 13 years and has seen a marked change in how people and companies are actively embracing and promoting avalanche awareness and having that conversation in films.

“You used to see people skiing amazing lines and you never got to see the repercussions of that,” Croston said. “More and more we’re seeing avalanche scenes included in the films so people have an awareness of what’s going on.”

It is a marked improvement because audiences can see how guides and filmmakers react when an avalanche takes place, giving audiences information on what takes place behind the scenes of films.

“It was important for them to tell their story,” Croston said, explaining that they have the perfect platform to reach outdoor enthusiasts. “It was an opportunity to really spread some great messaging.”