BANFF – The Eric Harvie theatre at the Banff Centre for Arts and Creativity , where audiences have watched remarkable performances for 52 years, will close its doors for the last time later this year.
May 31, 2019 2:29 PM By: Alana MacLeod 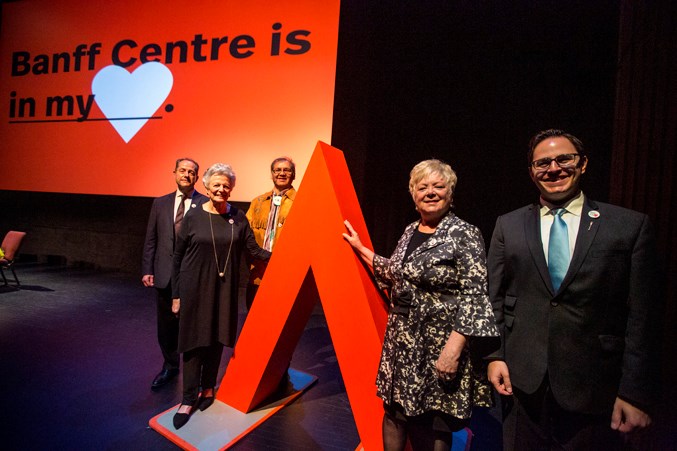 The Banff Centre for Arts and Creativity announces a $7 million renovation of the Eric Harvie Theatre, to be renamed the Jenny Belzberg Theatre in Banff on Friday (May 31). Bezlberg, a longtime supporter of the arts and former board member of the Banff Centre, was honoured by the centre after her family made a multi-million dollar donation towards the renovation project.

BANFF – The Eric Harvie theatre at the Banff Centre for Arts and Creativity, where audiences have watched remarkable performances for 52 years, will close its doors for the last time later this year.

Banff Centre board members announced  Friday (May 31) that a newly renovated theatre venue in the same space would be named after Calgary-born philanthropist, Jenny Belzberg, when it opens in 2020.

Janice Price, president and CEO of the Banff Centre said for her, a major renovation and revitalization of the 959-seat theatre venue was the right way for the arts-based organization to move into the future.

“It is the perfect way to start the next era of this great theatre with the legacy name," Price said. "With what Jenny’s name means in Calgary, in the Bow Valley, I think it is really just a perfect tribute and the Harvie family are very supportive of this which is great."

Belzberg was on the board and chair of the world-renowned centre for arts from 1987-91 and said she has visited the area since she was a young girl. She was appointed as a Member of the Order of Canada in 1996, was a recipient of the Alberta Order of Excellence in 2000 and a founding member of the Esther Honens Calgary International Piano Competition – to name a few of her accomplishments.

While she’s been a prominent figure in the cultural scene of Alberta, she said it was her children who decided the theatre should be named in her honour.

“It’s very nerve-wracking, that part I’m not so happy about, but my kids say it has to be that way,” Belzberg said with a laugh at the announcement.

Belzberg said she felt the theatre was in need of a revamp, but  was unable to do anything about it before now.

“I was so frustrated and nobody was doing anything about the theatre,” she said.

“Unfortunately I couldn’t do anything about it before, but now I have the means to do it, well my kids, it’s their gift to me. I’m really thrilled to do this I think it is really important for the whole country and for the world.”

Belzberg said she met with Eric Harvie's family before any decisions were made, as she wanted to ensure they were on board with the project before any steps were taken. As for the amount of the donation, it wasn’t revealed, but in a press release the Banff Centre refers to it as “one of the largest private gifts” it has ever received, something Price said the centre is very thankful for.

“We’re here today to give thanks to the Belzberg family," she said. "They have generously given the Banff Centre a transformational gift that will make it possible to revitalize the most important performing arts venue on campus.

“I’m very proud to announce that this theatre will be undergoing a major transformation over the next year thanks to Jenny Belzberg and her family.”

The new theatre construction will being in November and is expected to open – new name and all – by fall 2020. The project was awarded to a KPMB Architects from Toronto, working in partnership with MtA in Calgary.

KPMB Architects principal Chris Couse said his firm's plans for the redesign is to make the new space more intimate.

“It’s early stages, but we’re concentrated right now on trying to basically make it a more intimate space, which is going to involve some moves that reduces seating a little bit, but brings everybody closer together, closer to the stage and to the performers,” he said.

KPMB Architects have consulted on theatre revitalization projects before, like Toronto’s Massey Hall (still in progress), Orchestra Hall in Minneapolis as well as the Brearley School in New York City.

The project itself is the first step in a larger goal of revitalizing the entre Banff Centre for Arts and Creativity campus – a multi-million dollar project. The theatre renovations alone are currently expected to cost between $6 million to $7 million.

For Belzberg, it’s all worth it, because the performing arts hub is special to her.

“The Banff Centre is an important place in my heart, I call it a lab,” she told an attentive crowd.

“A lab for arts, it’s a place for innovation and creativity, it’s where artists get the opportunity to experiment and produce their dreams and project new ideas for the future.”

The last event to be held in the Eric Harvie Theatre will be this year's Banff Centre Mountain Film and Book Festival.

Visit the Banff Centre website at www.banffcentre.ca for more information.