BANFF – Banff’s fire department is calling for a second sprinkler trailer to protect more homes should a wildfire threaten the community.
Dec 20, 2018 12:00 AM By: Cathy Ellis 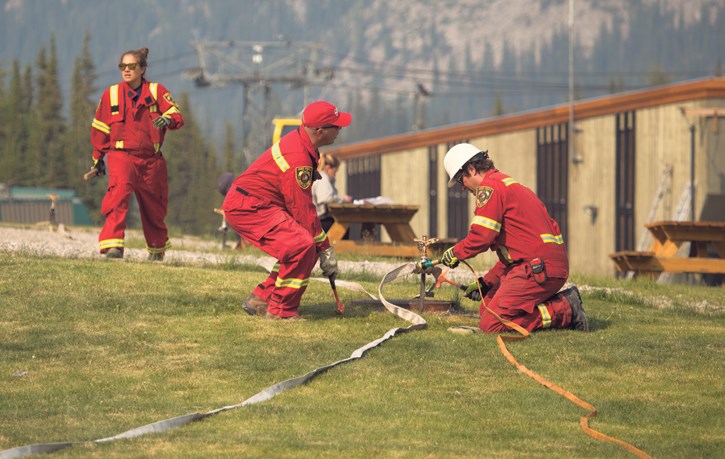 Town of Banff firefighters deploy a sprinkler line at Sunshine Village to protect its facilities as the Verdant Creek Wildfire in Kootenay National Park threatened the area on the other side of the continental divide during July 2017.

BANFF – Banff’s fire department is calling for a second sprinkler trailer to protect more homes should a wildfire threaten the community.

Banff already has one structure protection unit or, simply put, a trailer full of sprinklers used to dampen an area in advance of a fire, but adding another unit means protecting up to 150 homes instead of 100.

“I think everyone is starting to understand that wildfires don’t burn communities down through flame impingement; it’s through ember loading,” said Silvio Adamo, Banff’s fire chief and director of emergency services.

“With increased capacity and by creating two trailers, crews could deploy structural protection in two separate areas at the same time in the community.”

The cost to build a second unit is $30,000 for the trailer and $48,500 for equipment. Council gave preliminary approval to the project during its review of municipal service levels and projects, but it’s not a done deal until the capital budget is debated and given final stamp of approval.

Town councillor Corrie DiManno said this is a no-brainer.

“I think this is something we need to do,” she said. “We’ve seen the benefit of having one.”

The biggest fire threat to Banff comes from the west or southwest, where the forest is old and thick.

Effects of climate change on temperature, precipitation levels, and soil moisture are turning many forests into kindling and fires are expected to burn more frequently, with more intensity and become increasingly unpredictable.

The last two years have seen record wildfire seasons in North America, with neighbouring B.C declaring a state of emergency this past summer with more than 500 fires, including two in Kootenay National Park.

The year before, Bow Valley residents were on high alert with the Verdant Creek fire burning 18,017 hectares in Kootenay park and neighbouring Assiniboine Provincial Park.

To the south in the United States, California experienced its deadliest and most destructive wildfire season in state history this year. The Camp Fire, the worst of all, wiped out the town of Paradise, killing at least 86 people and burning through more than 10,000 homes.

Town of Banff officials say the more Banff can do to prepare for wildfire the better.

With a second structure protection unit, Adamo said there’s an opportunity to deploy one trailer to another community in the region under an existing mutual aid agreement, while keeping the second
one in town.

He said, however, that Banff would not send a trailer out of town if Banff’s fire hazard was high or extreme, noting the fire department had to turn down a request during the 2017 Verdant Creek wildfire because of conditions.

“It would always depend on our own fire behaviour,” he said.

Meanwhile, the municipality is offering two incentive programs to help residents do a better job of protecting their properties should a fire advance on the town.

“We are definitely getting great uptake on this program,” said Adamo. “If we get the same amount each year, we’re definitely on track to have all combustible roofs replaced within 10 years of the project starting, so 2027.”

A new incentive program is also available for residents to reduce wildfire hazards by removing conifer trees and replacing them with deciduous trees. There are about 186 trees that will be replaced, at a cost of $56,700.