“The provincial budget didn’t negatively affect our three-year operating or 10-year capital plan, and in fact, our capital plan will be much healthier than we had anticipated.”
Mar 2, 2021 7:10 AM By: Cathy Ellis 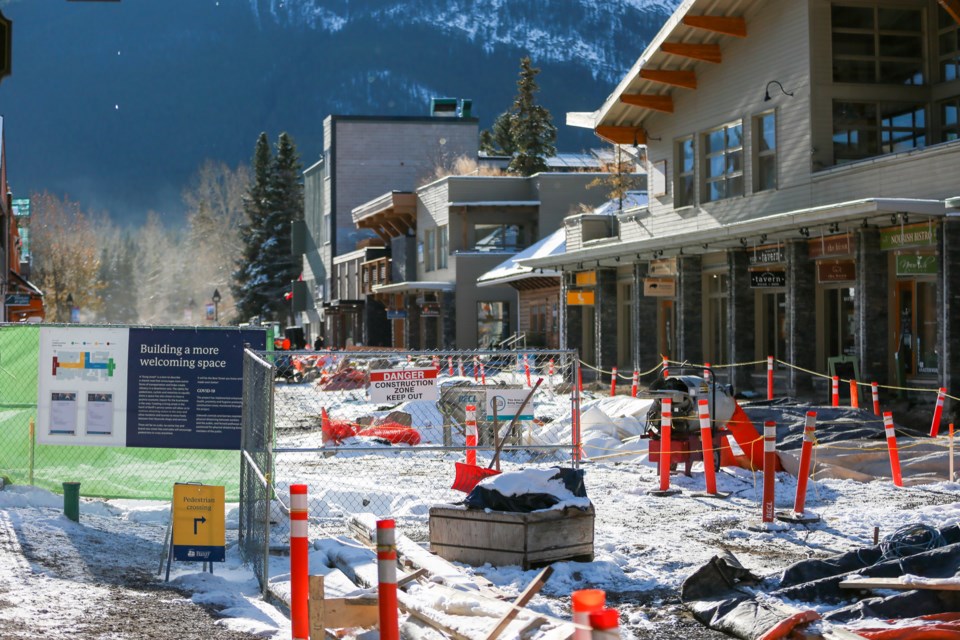 Most of Banff's MSI funding from the provincial government is being spent on the Bear Street redevelopment slated for completion in summer 2021. EVAN BUHLER PHOTO

Banff had banked on getting about $6.9 million in capital funding to build new infrastructure under the Municipal Sustainability Initiative (MSI) over the next three years, but will get closer to $8.8 million in 2021-23.

“Obviously, we would have liked to see more in there, but overall, we’re not disappointed with where we’re at,” said Chris Hughes, the Town of Banff’s director of corporate services.

“The provincial budget didn’t negatively affect our three-year operating or 10-year capital plan, and in fact, our capital plan will be much healthier than we had anticipated.”

The provincial government, which tabled its budget on Feb. 25, will allocate $1.2 billion under the MSI to municipalities across the province in 2021-22 in a bid to stimulate the economy and create jobs.

However, this means cities and towns will see a reduction in their capital funding in 2022-23 and 2023-24 to $485 million from $860 million, with $375 million being directed to the Economic Recovery Capital Envelope.

In addition, the long-awaited Local Government Fiscal Framework (LGFF), aimed at providing more reliable infrastructure funding to Alberta’s municipalities, is being deferred until 2024.

Hughes said the MSI portion of the provincial budget was definitely “not as bad as we had anticipated it might be” for Banff.

“We did receive messaging from the province prior to the budget to be prepared for some cuts to MSI, so the Town of Banff took that very seriously,” he said.

“We were very conservative in our estimates for what we built into our budget, so I think overall we’re pretty relieved with where it turned out.”

In terms of MSI operating dollars, the Town of Banff gets about $30,000 more a year than was initially budgeted.

The provincial government did announce a new economic recovery grant for 2022 and 2023 in the face of COVID-19 pandemic, but Hughes said there are no details yet on how that will roll out.

“We don’t know much about that yet, but that will even further enhance, in all likelihood, our capital grant revenue,” he said.

“I would suspect that we would have projects that would qualify. The total amount allocated is about 75 per cent of the annual for MSI, so it’s not insignificant.”

“The changes to MSI and the LGFF are another example of the province changing its plan and going back on campaign promises,” he said.

“[That] forces municipal leaders to go back to the drawing board for how they will take care of their community infrastructure.”

AUMA is also disappointed LGFF, which was first announced in 2019, had been delayed an additional two years.

“This program, once in place, promises funding for municipalities that is predictable, responsive, and legislated,” Morishita said.

Most of Banff’s MSI funding is going toward the $9.5 million Bear Street redevelopment project.

“We may have to apply for another project for that 2023 amount, but the majority of that will go towards Bear Street,” Hughes said.

Reconstruction of Bear Street started in April 2020 and will resume this month, until completion in mid-July 2021.

The project will replace all underground sewer and water mains, reconnect all utilities to properties on the street, add soil cells for better irrigation of more trees and landscaping, add more and better street lighting, provide public seating areas and areas where restaurants can apply to have patio seating.

There will be no curbs and no centre line, improving accessibility and slowing vehicle traffic, and the paving slabs will create an environment encouraging pedestrians to cross anywhere.