Banff ready to welcome back tourists with border opening

“We are seeing things pick up, but we know that the domestic market really isn’t enough to fuel the summer revenue that we’re going to need to make it though next winter.”
Jul 22, 2021 8:30 AM By: Cathy Ellis 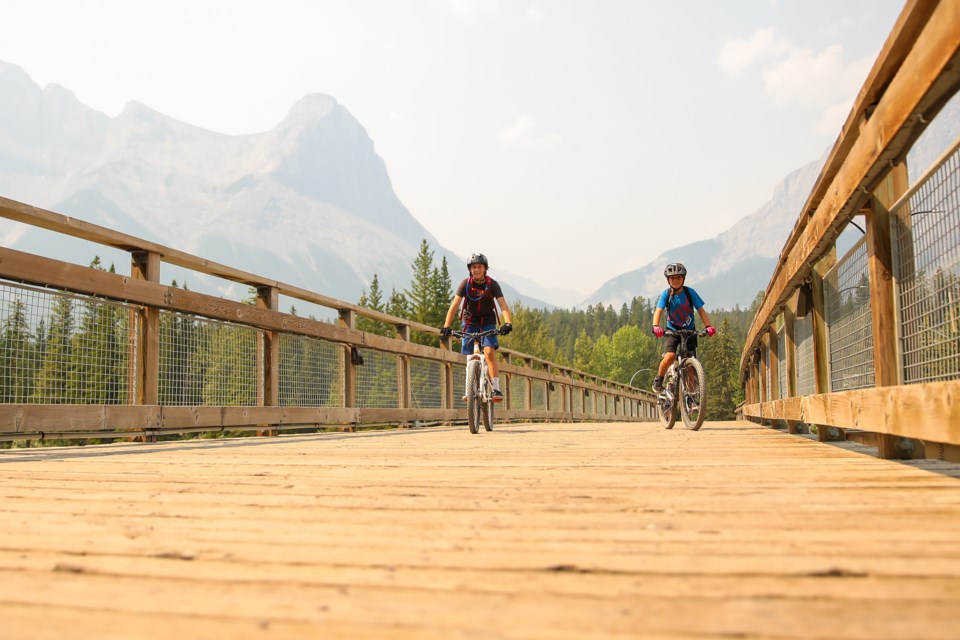 Two young cyclists ride their bikes across the Bow River pedestrian bridge, as a blanket of smoke, caused by wildfires in British Columbia, hangs over the Bow Valley on Thursday (July 15). EVAN BUHLER RMO PHOTO

BANFF – The local tourism industry got a shot in the arm with the federal government’s plan to welcome back American visitors this summer and international travellers as early as fall.

“I can’t underscore how excited we are,” said Leslie Bruce, president and CEO of Banff and Lake Louise Tourism.

“The ability to have a sightline to Aug. 9 and to Sept. 7 is so needed in terms of us taking a leap of faith to really turn back on.”

The Canada-U.S. border was shut down to non-essential travel on March 21, 2020 as the impacts of the COVID-19 crisis began to unfold around the world.

As a result, the tourism industry, including Banff where tourism is the only economic driver, was hit particularly hard.

Bruce said many Americans that had previously booked vacations in Banff and Lake Louise have already transferred them once or twice.

“Many businesses that have U.S. bookings are finally going to be able to say ‘OK, come on back’, so that’s really positive,” she said.

“We are seeing things pick up, but we know that the domestic market really isn’t enough to fuel the summer revenue that we’re going to need to make it though next winter.”

While Banff is packed, particularly on weekends, a lack of international visitors leaves many businesses struggling given they have different spending patterns.

According to the Tourism Industry Association of Alberta, international travellers spend about $1,180 per visitor per visit, Americans fork out $900 per visit and Albertans contribute $157 per visit.

Hotels have been dealing with lower bookings than pre-pandemic levels when occupancy was full, as many of the regional visitors from Calgary and surrounding areas typically do day-trips rather than stay several nights.

Officials with Banff and Lake Louise Hospitality Association (BLLHA) say hotel occupancy in June was down nearly four-fold from the number of rooms sold in June 2019 before the pandemic.

In addition, they say that May, as another example in the lead-up to summer, was approximately one-seventh of the recorded occupancy for the same time period in 2019.

“Without the presence of international visitors at this time of year, the destination sees most of its booking compression on the weekends,” said Darren Reeder, BLLHA’s executive director.

When the pandemic hit Canada in March 2020, about 80 per cent of Banff’s labour force was laid off, forcing Australians, New Zealanders, Britains and workers from other countries to head home.

While workers from Ontario and Quebec have shown up for summer jobs this year, Bruce said the destination is also excited about the prospect of welcoming back some of its international workforce.

“That is a really important piece for turning on the economy,” she said.

“People have been able to secure labour, but as things progressively grow and pick up, we are like everyone else in this country and strapped for adequate labour.”

With the reopening of Canada’s borders, all travellers regardless of vaccination status, will still require a pre-entry COVID-19 molecular test.

However effective Aug. 9, fully vaccinated travellers will not need a post-arrival test unless they have been randomly selected by border officials to complete a Day 1 COVID-19 test.

The three-night government authorized hotel stay requirement will be eliminated for all travellers arriving by air on Aug. 9.

Reeder said a predictable path to reopen the border and invite international visitors back is key to the survival of Canada’s tourism industry.

“The announcement is a significant milestone, setting the visitor economy back on a path toward economic recovery and for our destination to resume its important role of presenting this special place to the world,” he said.

“Having clarity of dates to re-welcome global guests is important for our tourism industry. We are a sector that needs time to prepare, even though tourism operators in Banff National Park have safely welcomed regional guests back for some time now.”

Meanwhile, Bruce describes the last 16 months as unlike anything ever imagined.

“It was pure devastation to every aspect of our industry, every aspect of the supply and demand chain – it completely broke, and I’ve been so concerned about how people will come out of this experience,” she said.

“It’s unimaginable that people literally shut down or shuttered their businesses for a year, which has happened to some people in order to make it through and to take another crack at it this summer.”

While extremely grateful for government financial supports such as the wage subsidy, rent relief and loan programs, businesses are starting to get anxious about these programs coming to an end.

“I am picking that up from a number of people, who are feeling, ‘oh my gosh, am I going to make it? Are we going to do enough this summer and will we make it if those supports are no longer there?’,” Bruce said.

“We had the third wave, and so for May and June, we did not see an improvement over last year, so this is now all coming down to July and August and September – and that’s really high pressure.”

While Destination Canada and Tourism Economics do not expect Canada’s tourism economy to bounce back to pre-pandemic levels until 2025, Bruce said she is confident Banff can revive earlier.

She said Banff and Lake Louise have what many people are looking for – wide open spaces, a safe and secure destination, and wellness travel and activities such as hiking, biking, meditation, mindfulness and nature.

“Because of the nature of the place, we’re really hopeful that rebound happens in two two three years, more like 2023-24,” she said.