Mayor Karen Sorensen offered condolences to the family and friends of long-term resident Ron Giesbrecht, 43, who died in his Banff home on April 29 due to complications from COVID-19.
May 12, 2021 12:00 PM By: Cathy Ellis 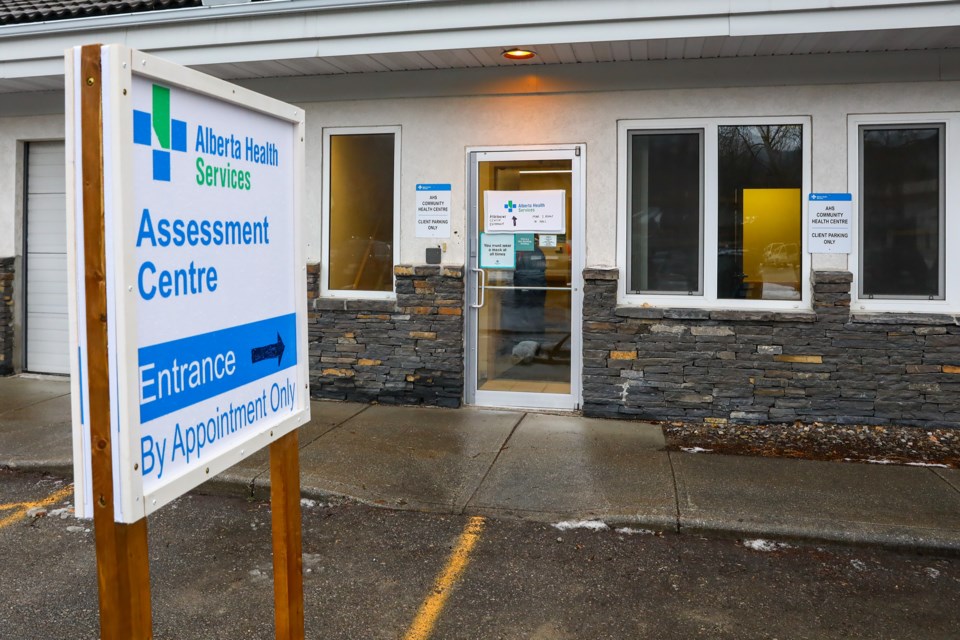 The provincial testing site at the Banff community health centre at 303 Lynx St., the site is open Mondays through Fridays from 9:30 a.m. to 5 p.m. Testing is available for COVID-19 symptomatic individuals, or close contacts of positive cases only. EVAN BUHLER RMO PHOTO

BANFF – Banff has recorded its first COVID-19 death since the pandemic began.

Mayor Karen Sorensen offered condolences to the family and friends of long-term resident Ron Giesbrecht, 43, who died due to complications from COVID-19 on April 29.

“This is such a tragedy, showing COVID can strike anyone, at any age. Ron will be missed but not forgotten," she said.

“Any time we have a death in our community, it has a big impact. This is a friend, a family member, a co-worker, a contributor to our community whom we have lost," she added.

“Until today, a resident of Banff has not been claimed by COVID-19, so we sadly join a very long list of communities that have lost one of their own to this global pandemic.”

Giesbrecht, who recently started a new venture, Rundle Mountain Ink, died in his home in Banff.

His younger brother has received treatment in a Calgary hospital and is recovering from the virus.

Although Alberta Health Services has not yet added Giesbrecht’s death to its website, the medical examiner confirmed the cause of death as due to COVID-19.

The Town of Banff will be exploring with the family the placement of a memorial plaque in the community.

“On behalf of Banff town council, our Town administration and the residents of Banff, I want to express our sincere sympathies to the family of Ron Giesbrecht,” said Sorensen.

“Ron lived here for over 25 years and is widely known and loved by so many in our community. Ron was only 43 and was a healthy young man.”

Mayor Sorensen said Giesbrecht's death is a reminder that everyone is at risk to this virus.

“We are seeing people of all ages succumb to the virus; it does not just effect one age group or people with underlying conditions,” she said, noting Banff is a part of the Calgary zone – which has hospitalization rates approaching full capacity.

“This is why we urge everyone to follow the restrictions and health measures to stop the spread of COVID-19."

According to an obituary placed in the Rocky Mountain Outlook, Giesbrecht was drawn to the mountains at an early age, spending most of his adult life in Banff.  Although his entrepreneurial spirit and love for business and adventure led him away a few times, his heart always found its way home and back to his Banff family.

"Ron truly lived hard and loved harder. He cared deeply for those in his life and wasn’t afraid to show it. Ron had a way of giving a hug with a smile.  He would often send messages of kind words via text, a phone call, with a selfie, or if you were lucky enough – he'd yell a hilarious catch phrase at you – sometimes even with a hiccup," it states.

"Ron touched the hearts of many people with his giant Pooh Bear sized hugs and his genuine love and zest for life. For this, and so many more things, he will be missed dearly … his memory will live on in all of those who were lucky enough to experience his warmth, his heart and his laugh."

“We want to emphasize that although our numbers are going in the right direction, we cannot afford to let our guard down,” said Silvio Adamo, director of emergency management for the Town of Banff.

“The next three weeks of increased restrictions will be pivotal to our community and Alberta.”

After Premier Jason Kenney handed down tougher measures last week, the Town of Banff asked visitors to stay away until after the May long weekend as the community and province battle to get the COVID-19 spike under control.

In the absence of a provincial travel ban, town council stopped short of setting up checkstops to turn tourists away, but unanimously decided to actively discourage visitation, while also asking residents to stay home.

Vehicle traffic throughout the week was relatively consistent with the previous week, about 9,000 or so vehicle per day, but dropped to 6,740 on Sunday (May 9), which was a cold and wet spring day.

Adamo said progress continues to be made on three fronts – testing, isolation spaces and local mass vaccinations for Banff residents of other Bow Valley communities, including Canmore and Lake Louise.

He said there are currently 11 people in quarantine in nine of the 143 isolation rooms available in four different approved isolation facilities in Banff. Currently, only Banff Lodging Company’s Red Carpet Inn is being used.

“We believe that having local PCR testing and isolation is playing a significant part in flattening the curve in Banff, amongst other variables,” Adamo said.

On March 1, Banff had COVID-19 under control with just three active cases before peaking at 164 on April 25. However, new cases continue to be diagnosed almost daily.

There has been a total of 795 cases in the Banff and Lake Louise region since the COVID-19 pandemic began. So far in May, there have been 28 cases of the coronavirus diagnosed compared to 265 in the month of April.

“That is absolutely a positive sign,” said Alison Gerrits, who sits on the Town’s emergency management team and is a member of the Bow Valley COVID-19 task force. “Testing centres are going to continue to do their work to diagnose those cases as quickly as possible.”

Gerrits said COVID-19 cases seem to be more severe during this wave than the previous one, noting four beds were occupied at Mineral Springs Hospital as of last Thursday (May 6).

While no medical information is available for confidentiality reasons, Gerrits said it is important the community knows that Banff’s hospital has capacity to treat patients, although those requiring ventilation are transferred to Calgary.

“I think what’s important to note is this wave of the pandemic has certainly created issues with respect to health more so than was the case in the earlier wave,” she said.

“We even saw that ourselves when operating the isolation facilities that people had more symptoms and were sicker generally than what appeared to be the case in the previous wave.”

On the vaccination front, mass vaccination clinics continue at the Fenlands recreation centre, scheduled for May 10-14 and May 17-20 inclusive, with capacity to book up to 500 appointments each day.

In addition, Alpine Medical Clinic started its vaccine program for those aged 18 and over on Saturday (May 8), with the goal of providing 330 doses of the Moderna vaccine by end of day Monday (May 10).

“They will hopefully be getting weekly shipments of the vaccine to their office,” Adamo said.

Adamo said the local provincial health unit and Gourlay’s and IGA pharmacies in Banff, plus seven pharmacies in Canmore, also continue to administer vaccines when supply is available.

“To all of our residents, please if you haven’t already booked your vaccination appointment, get online or call 811 and book,” he said.

“If we’re to have a heathy summer, we all need to get vaccinated.”

As of May 11, there were 24,998 active COVID-19 cases province-wide. There were 705 people in hospital including 163 in intensive care. Alberta's death toll since the beginning of the pandemic climbed to 2,119.