BANFF – A $6.4 million plan to develop Bear Street into a permanent plaza-like, pedestrian-rich experience has hit roadblocks.
Mar 28, 2019 12:00 AM By: Cathy Ellis 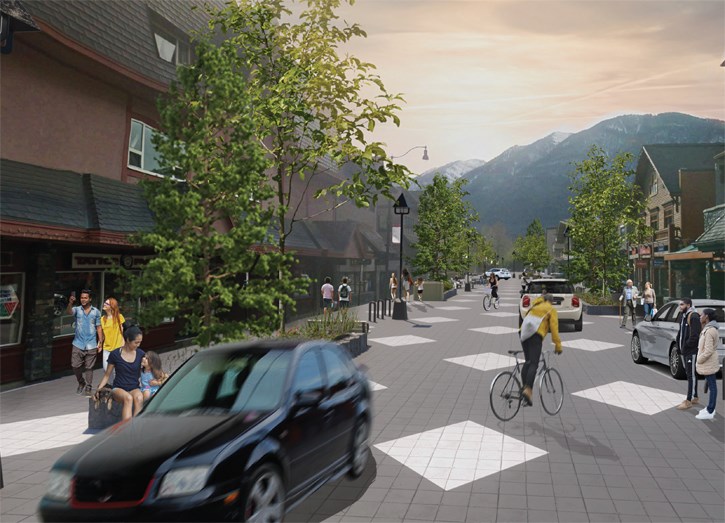 An artist’s rendering of the updated design for Bear Street under consideration by Banff council.

Council voted down a bid by Councillor Brian Standish’s to scrap the so-called shared street project in the foreseeable future, while another councillor has indicated openness to postpone next year’s planned construction.

Standish, who manages Banff Home Hardware on Bear Street, said there are growing concerns amongst residents and businesses about a lack of parking and loading spaces, the hefty price tag and the magnitude of change in the permanent design from the summer trials.

“As the project has progressed from seasonal trials to near full implementation, I’ve heard increasing concerns from residents on the necessity and value of the project,” said Standish at a council meeting Monday (March 25).

“There are so many moving parts in this discussion, including paid parking, intercept lots, residential parking passes that I believe we have to put the Bear Street shared street on hold. If we don’t do it, we will have lost the confidence of the public.”

The plan to redevelop the 200 block of Bear Street has been on the books since the 1992 downtown enhancement plan.

During four years of summer trials beginning in 2015, 16 on-street parking stalls were removed to make way for landscaping, public seating and sidewalk cafes.

A draft design of a permanent shared street project removed all on-street parking, other than a couple of handicap parking stalls, with loading zones designated to back alleys.

However, in the face of strong public opposition to the draft design, administration is now recommending four to eight on-street, short-term stalls year-round.

In addition, there’s a possibility for six handicap parking stalls in the 52-stall surface lot, as well as seven one-hour stalls for people to access nearby professional and medical services.

Darren Enns, development services manager for the Town of Banff, said the key issues that came out of public consultations were parking and loading.

“While the range of feedback on this topic ran the gamut from ‘don’t take any parking away’ to ‘remove all car traffic and parking,’ there was a general desire to see a pragmatic approach to increased loading and parking,” he said.

One of the main themes of public feedback centred on access for residents to Bear Street medical services, including doctors, physiotherapists, and pharmacies.

“It is challenging to plan a multi-decade capital project around an existing tenant base,” said Enns.

Kaitlin Paris, owner of Banff Home Hardware, called on council to postpone the project, noting she had signatures of 350 people who continue to have grave concerns.

Four to eight on-street stalls are not enough to accommodate people going to medical appointments or for those buying items from retailers, she said.

“While many of us are healthy and uninjured, I can assure you that even walking a block as an injured person, or carrying a heavy object can be taxing,” she said.

Paris emphasized that residents think of Bear Street as a local’s street, noting many of the businesses serve locals.

“If locals cannot access these businesses, and previous summer trials has shown this is a challenge, then they will be forced to go elsewhere,” she said.

James Clem, of Alpine Medical Clinic, wrote to council about the importance of having easy access for patients to both medical clinics on Bear Street.

“Vehicle access to medical care for these patients also seems like a more important priority than being able to drink a latte in the sun.”

She said administration’s recommendations to council show that resident and business input is being considered.

“I think where I get frustrated is we do go out and genuinely ask for feedback and we often hear, ‘you’re not listening.’ I am listening, it’s just maybe I don’t agree with the next steps,” she said.

“From my perspective, what’s being recommended here is quite a change from what we first envisioned, and while I might not agree with all of them, I do appreciate that this is in response to public feedback.”

Coun. Chip Olver indicated a willingness to postpone the planned construction in 2020.

“I am prepared to look at this some more,” she said. “I respect the recommendations that came forward from administration, but I think there’s still more movement to be made in those recommendations.”

The issue comes back to council for further discussion at its April 23 meeting.