BANFF – Banff is considering lowering the townwide speed limit to 30 kilometres per hour. The proposal, to be debated by council at its next meeting on Oct. 9, would set the vehicle speed limit on all roadways at 30 km/h beginning in spring 2019.
Sep 27, 2018 12:00 AM By: Cathy Ellis 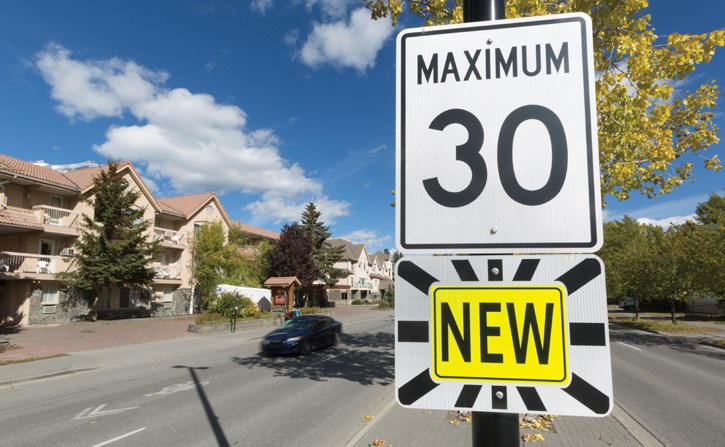 BANFF – Banff is considering lowering the townwide speed limit to 30 kilometres per hour.

The proposal, to be debated by council at its next meeting on Oct. 9, would set the vehicle speed limit on all roadways at 30 km/h beginning in spring 2019.

“When you slow everything down it’s more comfortable for everyone,” said Chad Townsend, the Town of Banff’s environmental manager.

“Given the small geographic size of Banff – four square kilometres – this change would add no more than a few minutes to any vehicle journey in the community.”

Earlier this week, Calgary city councillors voted to drop the speed limit on some residential streets and administration is now studying if it should be dropped from 50 km/h to 40 or 30.

Airdrie made the change to 30 km/h on its residential steets in the early 1980s and several streets in Cochrane were lowered to 30 this summer.

Banff’s current traffic bylaw sets the speed limit at 40 km/h, although the posted speed is 30 on Banff Avenue, Middle Springs Drive, Cougar Street, part of Buffalo Street near Surprise Corner and Glen Avenue, as well as in playgrounds and school zones.

Mayor Karen Sorensen said she is open to a 30 km/h speed limit on residential streets, noting several studies have determined that speed is best for pedestrian and cyclist safety.

“From my perspective, this concept isn’t to irritate or frustrate drivers, it’s to create an environment where riding a bike is safer, particularly for children and for people who are less comfortable riding a bike,” she said.

“It’s a safety issue for me and I’m enthusiastic to get more people to ride bikes. If we can create a safer community for riding bikes, I think it’s worth considering.”

He said council’s four-year strategic plan targets a 15 per cent increase from 2014 levels in the use of alternative transportation to get to work, but this hasn’t been achieved, according to the 2017 census.

In order to achieve council’s goal, Townsend said several new initiatives would be required, including improved infrastructure for cyclists who are less confident in vehicle traffic.

“Reducing vehicle speed limits could act as both a disincentive to unnecessary car travel, and an incentive to choose active modes,” he said.