BANFF – A controversial $6.4 million plan to redevelop Bear Street into a permanent pedestrian-friendly, plaza-like experience has been given the green light.
Apr 25, 2019 12:00 AM By: Cathy Ellis 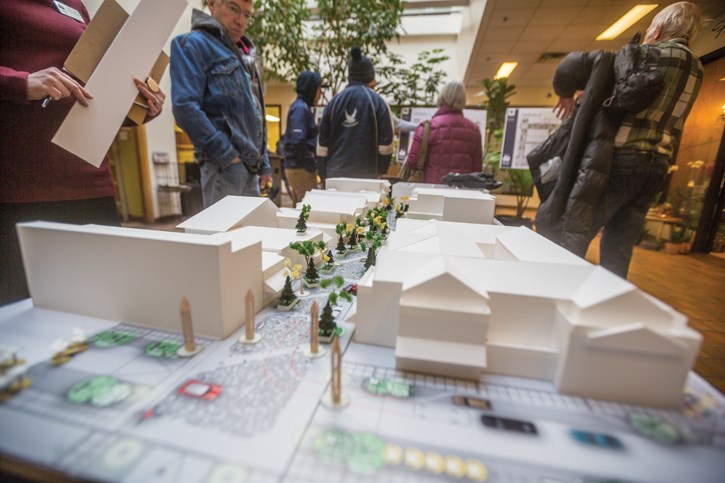 The Town of Banff consulted with members of the community over a variety of woonerf proposals at the Bear Street Mall in Banff in March.

BANFF – A controversial $6.4 million plan to redevelop Bear Street into a permanent pedestrian-friendly, plaza-like experience has been given the green light.

On Tuesday (April 23), council approved construction of the so-called shared street project in 2020 as planned, despite efforts by councillors Brian Standish and Ted Christensen to push it back a year.

Redevelopment of Bear Street calls for no on-street parking, but in the face of strong public opposition, council approved four to eight short-term loading zones and two handicapped stalls on the street, as well as six accessible parking spots and several one-hour spaces in the surface parking lot.

“You have your direction,” said Mayor Karen Sorensen to administration, noting she believes the changes address the concerns of residents wanting access to medical clinics, physiotherapy and the pharmacy on Bear Street.

The plan to redevelop the 200 block of Bear Street has been on the books since the 1992 downtown enhancement plan.

During four years of summer trials that began in 2015, 16 on-street parking stalls were removed to make way for landscaping, public seating and sidewalk cafes.

Darren Enns, development services manager for the Town of Banff, said the dominant themes coming out of extensive public consultation on this project were parking and loading zones.

“There was a range of opinions from removing all the parking from Bear Street to putting back what we have today,” he said.

Steve Shigeishi, a physician at Banff Alpine Medical Clinic, said he thought council’s changes to the plan would be helpful for patients.

“It’s a beautiful project and we certainly understand the impetus behind it, but we also want to have adequate access for patients that need to use our services who might have some mobility issues,” he said.

Mike Mendelman, a longtime resident and businessman, voiced strong support for the project, noting the shared-street concept with a focus on pedestrians embraces a future with fewer private vehicles.

“By 2040, transportation will look as different as the car looked to the horse and carriage generation 100 years ago. In the next 20 years, what it means to own or simply drive a car will have fundamentally changed,” he said.

“Town planners the world over are planning for these changes right now and are shrinking the amount of space devoted to cars … how to reutilize public space currently utilized as parking into affordable housing, small parks and pedestrian amenities.”

Coun. Ted Christensen pushed to hold off on the project for another year.

“We have 350 signatures or more on a letter, and we have three or four businesses with concern over the parking stalls,” he said. “We have lots of enthusiasm, but I think we need to fine tune it a little bit more.”

For Coun. Chip Olver, additional accessible parking and loading zones for those needing to get to medical appointments was a must.

“This is a make it or break it for me,” said Olver, who has had two hip replacements and personal experience in not being able to find parking when she needed it.

Coun. Corrie DiManno supported the parking and loading zone changes based on what she heard from residents, but voiced concern it continued to chip away at the intent of the project.

“Every inch we take away from pedestrians continues to be a car-centric area,” she said.

“I don’t know why being able to park right next to the space you need to walk five steps to has been so ingrained us.”

DiManno also acknowledged there was community concern on the big budget project.

“I know it’s scary, I know there’s angst and I know there’s fear, but I don’t want these things to hold us back from doing the right thing for the future of Banff.”

Coun. Peter Poole declared a conflict because he owns property on Bear Street.