“It is interesting in our history that not feeding wildlife is such a pertinent part of our community, and yet somehow we get to be the council, we get to be the Grinches that say bird-feeders will potentially and probably have to go.”
Sep 16, 2020 7:42 AM By: Cathy Ellis 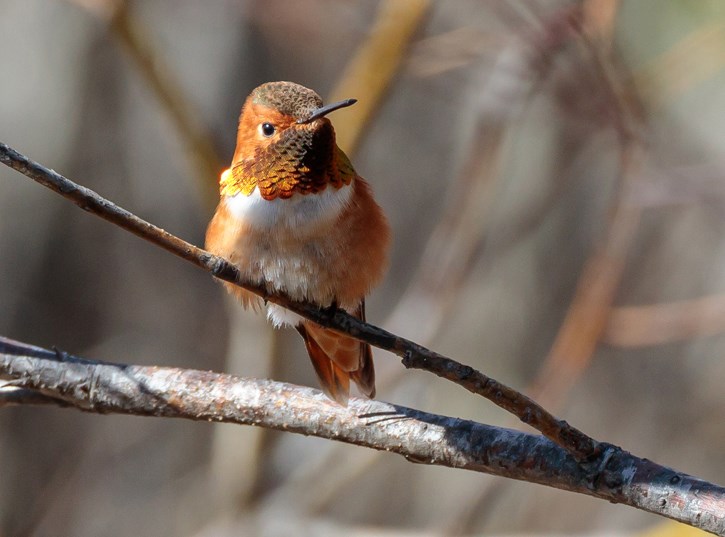 A rufous hummingbird rests for a moment along the Marsh Loop in Banff. RMO FILE PHOTO

BANFF – The Town of Banff plans to ban bird-feeders under proposed new municipal legislation designed to prevent drawing hungry bears in search of food into town.

Bird-feeders are already prohibited under federal legislation in Banff National Park, including the townsite, however, Town of Banff officials say the process for park wardens to lay a charge is much more onerous than it would be under a municipal bylaw.

“Municipal Enforcement was advised of concerns that the Banff National Park warden service and wildlife specialists were experiencing where bird-feeders could potentially attract wildlife,” said Tony Clark, the Town’s manager of municipal enforcement.

“The Parks wildlife regulations actually do apply in the town, but at this point there is a mechanism not enforceable by us, but by the wardens, and it would be much easier to enforce it through a bylaw.”

Banff’s governance and finance committee has directed administration to prepare an amendment to the Community Standards Bylaw to prohibit bird-feeders inside town boundaries. First reading will be considered at a future council meeting.

Councillor Brian Standish called for some discretion when enforcing the bylaw, saying he doesn’t believe “it’s one size fits all.”

“Imagine I live in a one-bedroom apartment above the Charlie (Charles) Reid Mall and I’ve got a bird-feeder. I don’t believe a bird-feeder on the third storey of a building in downtown Banff is an animal attractant,” he said.

“If I live in Middle Springs and right next door to the wildlife corridor, definitely yes, but I don’t think we can paint it with all one brush. I think there should be some discretion.”

The municipal enforcement officers most likely will deal with illegal bird-feeders on a complaint basis given the department’s heavy workload, unless given direction from council to do otherwise.

Clark said officers will have discretion when dealing with complaints about illegal bird-feeders, but noted “we’re not necessarily going to be the guys that are looking over people’s fences.”

“All officers would have full authority to enforce this, but having said that, this doesn’t mean that if there’s an animal attractant complaint, whether reactive or proactive, that we’re going to go and issue the fine right away,” he said.

“We’re likely going to be managing that attractant in most cases, and that’s going to be removing it.”

Some councillors questioned whether the intent of banning bird-feeders solely is to prevent attracting large animals like bears into town, or also about feeding birds.

There has never been a complaint to the bylaw department about bird-feeders attracting birds, according to Clark.

“Any time that we’ve gone to help out, it’s been some type of animal, usually bears,” he said, noting the last incident was two years ago in the Middle Springs neighbourhood.

“Bears seem to be able to climb up to some pretty high decks here and there on the outskirts of town and get into bird-feeders.”

Mayor Karen Sorensen, who was co-chair of the Bow Valley human-wildlife coexistence task force, said the concern is feeding wildlife of any kind, including birds.

“As a member of the wildlife coexistence group, feeding any wildlife was a concern of that group,” she said.

“It is interesting in our history that not feeding wildlife is such a pertinent part of our community, and yet somehow we get to be the council, we get to be the Grinches that say bird-feeders will potentially and probably have to go.”

He also encouraged administration to reach out to Parks Canada to encourage a similar approach at outlying commercial accommodations in the park.

“I think we want to be consistent within the whole park,” said Coun. Poole.

“In the last week, I was told by one person of how wonderful it was visiting this one OCA because they had X bird-feeder.”

A spokesperson for Parks Canada did not get back to the Outlook for comment.