Bison unearth skull of their ancestors 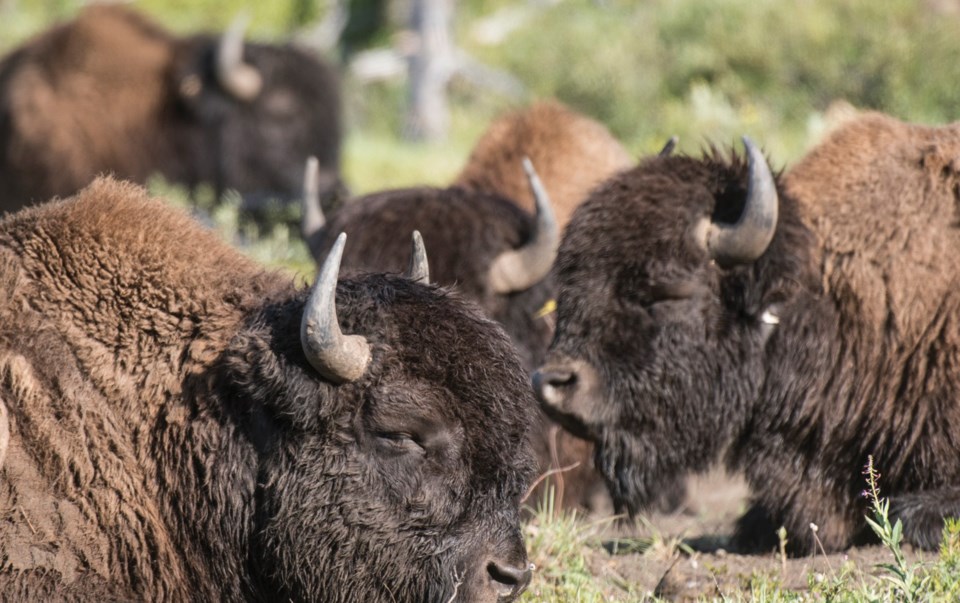 BANFF – A herd of reintroduced bison breaking trail in Banff’s backcountry has unearthed a bison skull from one of its ancestors.

As the bison wallow, create new trails and graze in the area of the Red Deer and Panther valleys, they are actually uncovering past evidence of their time here hundreds or thousands of years ago – from bison bones to old wallow sites.

For instance, a staff member working on the reintroduction project was following the herd along a newly-punched trail when he stumbled across a decomposed bison skull, mixed with other bison bone fragments, in the Tyrrell Flats area of the Red Deer Valley.

It has since been sent for radio carbon dating to determine its age.

“It was the bison themselves that led to the discovery, literally from their hoof action,” said Karsten Heuer, project manager of the bison reintroduction project for Parks Canada.

“They are actually uncovering bones from their ancestors as they’re punching in trails, which is pretty neat.”

In September, Heuer was telling the story of the bison skull discovery to a co-worker from Ottawa during a walk in the bison reintroduction zone.

“He said, ‘like this?’ and sure enough there were more bones. It sends shudders down your spine,” Heuer said.

“It’s almost as if the bison are picking up ancient signs that aren’t readily visible to us.”

The $6.4 million bison reintroduction project involved bringing 16 plains bison from a disease-free population at Elk Island National Park to Banff National Park in February 2017 – the first time bison were in Banff’s backcountry in more than 150 years.

There are currently 35 animals in the herd, which will potentially grow to as many as 300 by 2031. Three bulls are no longer part of the project, with one being shot and another two being relocated after bolting onto provincial lands.

In the first year, 10 calves were born and another 10 the following year, all in the fenced pasture. Two more calves were born last June, this time in the wilds of the broader reintroduction zone.

One of those two young calves has since died, perhaps killed by a predator, or succumbed to injury or the harsh mountain environment through exposure to many natural hazards, including severe weather, steep terrain and challenging stream crossings.

Last September, staff noticed the calf wasn’t with its mother or the rest of the main herd. A month passed before staff could see the elusive herd again, and a few weeks later, images from one of the remote cameras confirmed the calf was gone.

“This is simply an example of nature taking its course within a healthy ecosystem,” Heuer said.

Bison are known as ecosystem engineers.

“One of the things that really caught me off guard is they’re revisiting many of the areas that their ancestors did, and as they’re literally grazing down the grasses, they are revealing old wallow spots that would have been there from hundreds, even thousands of years ago,” he said.

“In fact, they’re even reactivating them and they are returning a lot of the ecological processes that actually are important to meadow-loving birds, creating itinerant habitat for amphibians and more.”

Bones are proving crucial to understanding the lives of ancient bison in Banff National Park.

Their discovery forms part of a growing body of evidence suggesting some plains bison spent most, if not all of their time in the mountains before the species almost went extinct more than 150 years ago.

Recent radio carbon dating of about 15 bison bones reveals the age of the bones, while another test known as isotope analysis sheds light on the historical habitat and diet of bison, providing clues as to where bison historically spent their time.

Bison remains have been found throughout Banff National Park, including at prehistoric campgrounds uncovered near Lake Minnewanka dating back approximately 10,370 years.

There have been other finds in the Bow Valley, including the 2,100-year-old bison bone discovered by Parks Canada staff last spring along Brewster Creek and a bone found at Vermilion Lakes in 1995 that radiocarbon dating showed was 3,900 years old.

Following a prescribed fire in the Panther River valley, a team of archaeologists uncovered a 660-year-old bone in 2017 in the soft release pasture where the reintroduced bison herd was initially held.

Millions of bison, estimated as high as 30 million at one time, roamed the plains of North America before overhunting edged the species to the brink of extinction in the 1850s.