Complex intersection in Banff could get major overhaul

BANFF – A $1.5 million project to beautify and fix a challenging and confusing downtown intersection has the eye of council.
Dec 13, 2018 12:00 AM By: Cathy Ellis 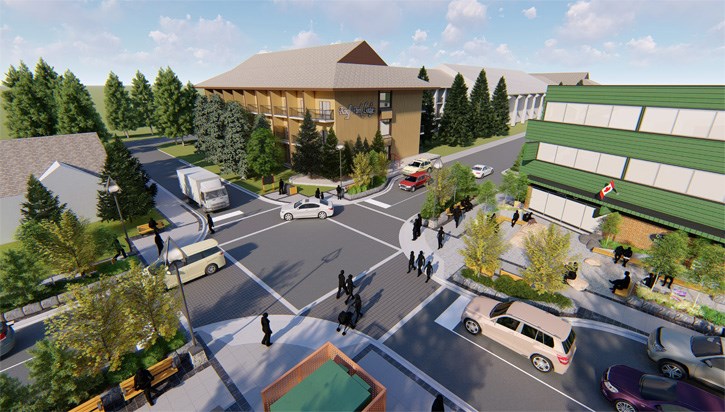 An artist’s rendering of what the intersection at Lynx and Caribou Streets and the Bear Street laneway might look like.

BANFF – A $1.5 million project to beautify and fix a challenging and confusing downtown intersection has the eye of council.

Town of Banff officials say the project includes realignment of the five-way intersection at Lynx-Caribou streets and the Bear Street laneway. The project also includes the creation of a parkette or pedestrian plaza in front of the Olympic building, including possible integration of public art.

Town of Banff officials say the busy intersection is offset by about 10 metres and pedestrians have to walk a 30-metre crosswalk from the Mason Hall to Melissa’s, making it confusing and challenging for both drivers and pedestrians.

“This is ground zero for our community when it comes to pedestrians, and the experience right now is a disappointing one.”

During its review of municipal projects and services on Wednesday (Dec. 5), council gave the project preliminary approval, although nothing is a done deal until the capital budget is debated in its entirety later this month.

Enns said this project would also piggyback on two nearby projects, including redevelopment of the Homestead Inn, which is required to improve the sidewalk as part of its development permit, and construction of a permanent woonerf on Bear Street.

“You’re going to see a significant amount of private investment in the pedestrian realm in front of the Homestead and Melissa’s, coupled with the public project on Bear Street,” he said. “If this project doesn’t move ahead, you’re going to end up with a bit of a hole and lack of connectivity in between these two projects.”

It also comes at a time when there’s a need to address ageing underground infrastructure at this intersection and on adjacent parts of Caribou Street.

“It needs to be updated to a 21st Century standard,” said Enns.

Councillor Peter Poole declared a conflict of interest because he has a financial interest in one of the buildings. Councillors Ted Christensen and Chip Olver were absent, but the rest of council voiced strong support for the project.

Mayor Karen Sorensen cautioned that this is by no means a done deal until final capital budget deliberations.

“I need to see the full capital budget and understand the implications of probably bumping other projects to prioritize this one, because at the end of the day there’s only so much money to go around,” she said. “But I love this project for so many reasons, mostly the full beautification that’s going to happen there. It just makes so much sense.”