“With it being an extremely reliant tourist economy, that has put Banff in a unique situation compared to most other jurisdictions where tourists aren’t coming in,” said Sandy White, a former Banff resident and cofounder of Rapid Test and Trace Canada.
Dec 30, 2020 8:00 AM By: Cathy Ellis 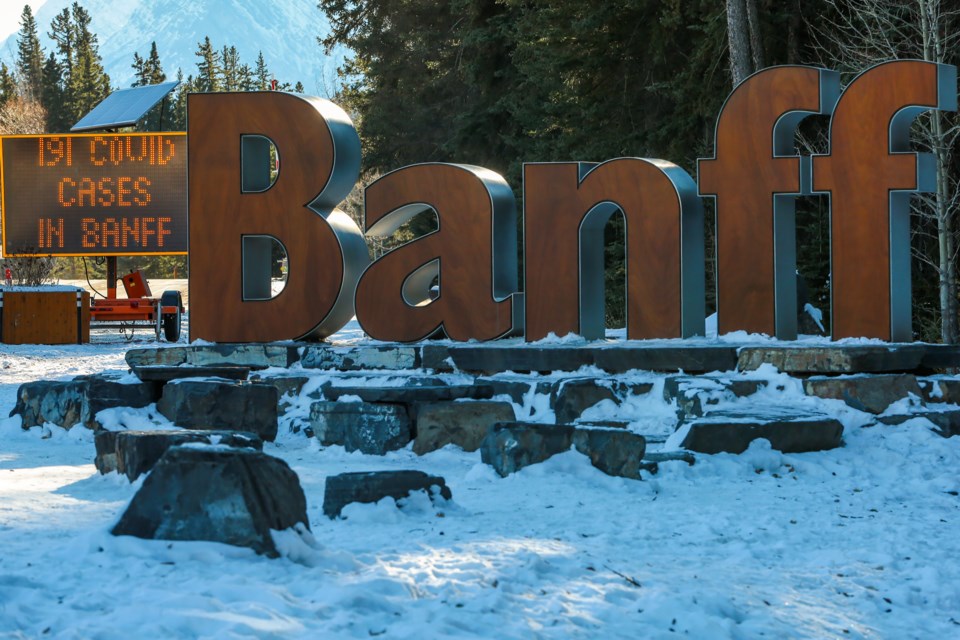 A sign erected at the Mount Norquay Road entrance to Banff notifies visitors of the active number of COVID-19 cases in the town on Tuesday (Dec. 1). The Town of Banff declared a state of local emergency in tandem with the measures enacted under the Provincial Public Health Emergency, to stop the spread of COVID-19. EVAN BUHLER RMO PHOTO

BANFF –  Members of Banff’s business community are working to get a rapid testing and tracing pilot program in Banff National Park.

Working with Rapid Test and Trace Canada, officials with the Banff Hospitality Collective say the pilot project would see the entire community tested in quick succession, with daily follow up tests of five to 10 per cent of the population.

Yannis Karlos said the pilot would use cost effective antigen tests, with positive cases followed up with PCR (polymerase chain reaction) tests, which is the testing method currently used in Canada.

“This model has been successful in a number of jurisdictions and has been proven to control the spread of COVID-19,” Karlos said.

Banff and Lake Louise had dropped to 16 active cases, down from a high of 192 at the end of November. For much of November and into December, Banff was considered one of the COVID-19 hot spots on a per-capita basis in Alberta.

In mid-December, Rapid Test and Trace Canada launched a campaign to advocate for mass rapid testing across Canada as a strategy for identifying cases early and containing spread of the virus.

Sandy White, who is a co-founder of the organization, said he wants the provinces to begin mass rapid testing, including for people who are asymptomatic, to avoid missing cases if only those with existing symptoms are tested.

“I’ve been looking at what other jurisdictions have been doing to manage COVID well,” said White, who grew up in Banff with his family, which previously owned Mount Norquay ski hill.

“We landed on rapid testing as probably the best and easiest strategy to get COVID under control while we’re waiting on a vaccine, which is still realistically a very long time away.”

Canada was the third country in the world to approve the Pfizer vaccine in mid-December, and on Dec. 23, Health Canada authorized the Moderna COVID-19 mRNA vaccine as well.

In the meantime, Alberta had introduced rapid testing pilots for COVID-19 at long-term care and designated supportive-living facilities, which have been hit particularly hard by outbreaks of the virus.

Rapid testing involves using rapid antigen tests to test large groups of people frequently, regardless of whether or not they are showing symptoms, to identify and stop the spread of COVID-19.

White said the goal of Rapid Test and Trace Canada is to push for pilot projects and Banff seemed like the perfect place to start, given its nature as a tourism community.

He also points to the high rate of community transmission in November and into December, which peaked at 192 cases on Nov. 30, and could quite possibly occur again.

“With it being an extremely reliant tourist economy, that has put Banff in a unique situation compared to most other jurisdictions where tourists aren’t coming in,” he said.

White said he is trying to work out the finer details of the proposed pilot project, but it will likely end up being a public-private partnership approach.

“In the Banff context, what we are hoping to see in the coming months or so would be council and the business community approving the broad strokes of a plan, and us then bringing that plan to the province for their support,” he said.

“We would continue to deal with Health Canada, who might support it directly or the tests could come from the province, so then when it comes to sharing of costs, that is still getting ironed out.”

The timeframe for getting this pilot project off the ground is still unknown.

“I can’t really speculate on that right now,” White said.

“We would love to have something in place in January, and realistically, that’s achievable. Whether or not the machine moves fast enough is another question.”

Karlos said this has been one of the most challenging years in Banff’s history.

He said there is one goal everyone can agree upon – staying healthy.

“It could be as late as fall before we see a widespread rollout of vaccinations in the broader population of Canada, so we need to start thinking of proactive and creative solutions to protect the health of our community,” he said.

“The program we are proposing gives us a tool to stay ahead of community spread and, if successful, allow us to regain normality in our lives.”

The Town of Banff is aware of the effort to secure rapid testing in Banff led by members of Banff’s business community.

“Rapid testing is a good measure to pursue because it would accelerate the time people could be alerted they need to isolate, to avoid transmission of the virus,” said Jason Darrah, the Town of Banff’s director of communications and marketing.

“The Town is looking to support the initiative in the best way to support our community, and we are eager to learn more about who would be able to participate, the duration and location, and how it would be implemented.”

There were two major COVID-19 outbreaks in Banff National Park –  one at the Banff Springs Hotel and the other at Lake Louise Ski Resort’s staff accommodations – which were listed on the Alberta government’s website.