Food and Friends coming to Banff

BANFF – The supremely popular Food and Friends night held by St. Michael’s Anglican Church in Canmore is expanding to Banff this summer. St.
Mar 21, 2019 12:00 AM By: Aryn Toombs 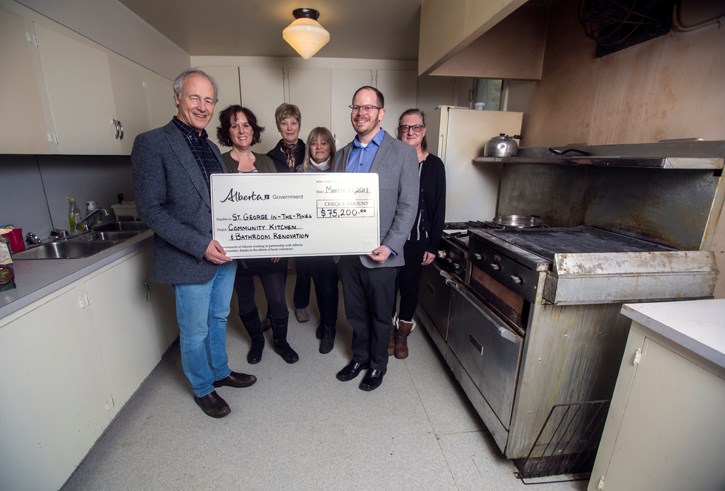 Reverend Howard Thornton, left, and members of the Anglican Church receive a cheque from the Alberta Government for $75,200 from Banff-Cochrane MLA Cam Westhead at St. Georges-of-the-pines in Banff on Thursday (March 14). The funds, along with community donations, will be used to create a commercial kitchen at the church to provide food preparation space for a Banff food and friends night.

BANFF – The supremely popular Food and Friends night held by St. Michael’s Anglican Church in Canmore is expanding to Banff this summer.

St. George’s-in-the-Pines’ plans to transform the current kitchen space into a full fledged commercial kitchen along with upgrading bathroom facilities and water access, allowing for greater community use of the church.

“We know there is a need for this in Banff,” said Rev. Howard Thornton.

On Thursday (March 14) the Government of Alberta gave $75,200 towards the renovations, which complements donations of commercial kitchen equipment made by the Banff YWCA and local restaurants.

The entire kitchen will be refurbished, with new stoves, counters, storage space and a dishwasher.

Over the past four years St. Michael’s has served over 30,000 meals at the Monday night community event in Canmore.

“It’s for everyone who is starving for community really – as well as a good meal,” said Thornton.

The goal for the church is to assist in building a more vibrant Banff community, something they see as an underserved niche at present.