“We are still willing to complete this historic project in the spirit and with the enthusiasm with which it was begun. Not to do so would be a second tragedy in the story of the Banff Pavilion.”
Sep 26, 2019 8:27 AM By: Cathy Ellis 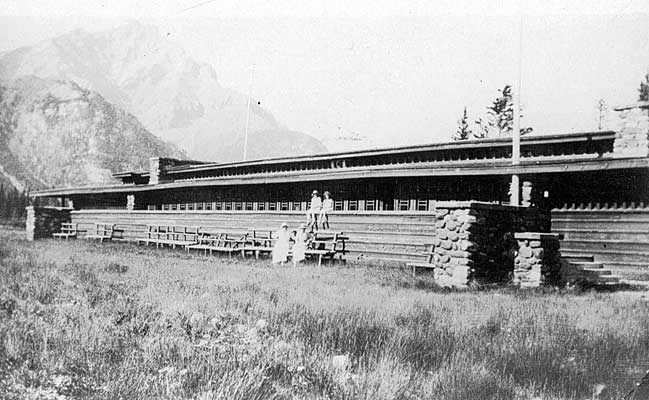 BANFF – A plan to create a replica of one of famed 20th century architect Frank Lloyd Wright’s lost projects appears to be at a stalemate.

The Frank Lloyd Wright Revival Initiative is appealing to the community to get behind its plan to rebuild the Banff Pavilion, noting the project has been on hold for more than a year while the organization has unsuccessfully sought a meeting with town council.

Michael Miner, an American documentary filmmaker behind the plan, said the organization has satisfied all the terms of reference required by council, with the exception of certain engineering studies and reports, or those terms “we feel are not applicable to this project.”

Miner, who wants to rebuild the pavilion close to its original site at the recreation grounds as a legacy to Wright and for the Banff community, said he realizes there must be a process to follow in order to approve and construct a building in Banff.

“But the process currently in place has obviously been set up to deal with ‘for profit’ developers, and not a non-profit organization that unprecedently intends to rebuild a lost historic structure and donate it to your community,” he said in an email sent to the Outlook.

“And we are frustrated, and frankly disappointed, that no effort has been made by the council to streamline, or in any way adapt this process to help accommodate our needs.”

The Banff Pavilion, which was demolished in the 1930s, was one of only two Wright buildings in Canada. The other is a private cottage in Ontario that still stands.

Wright, who is one of the most distinguished and famous architects of the 20th century, designed and built more than 500 structures, many of which have become icons of design, including the Guggenheim Museum in New York and Fallingwater in Pennsylvania.

Along with his only Canadian student, Francis Conroy Sullivan, he designed the Banff Pavilion in his rustic Prairie School style in 1911 at the request of the federal government.

Construction began in 1913 and finished the following year, but the building was demolished in the late 1930s after suffering severe flood damage.

Council supported the Frank Lloyd Wright Revival Initiative concept in principle in 2016, but stated that the project cannot conflict with the recreation grounds master plan and that a comprehensive feasibility and cost analysis would be required.

Randall McKay, Banff’s acting town manager, said Miner and his team have certainly provided an excellent overview of the historical context of Wright’s pavilion in Banff, which includes supporting rationale as to why the reconstruction of the pavilion should be considered.

However, he said aside from providing an overview of site location alternatives, a summary of building design and construction costs and a handful of programming options, significant more analysis is required before planning and development staff can present a report to council.

“The recreation grounds master plan calls for the design of a multipurpose building in 2020 with construction tentatively scheduled for 2021,” said McKay.

“In the interim, the Town of Banff is endeavouring to keep site planning options open provided they do not conflict with the master plan.”

Based on the group’s research, Miner said a rebuilt pavilion could bring in a significant source of revenue for the Town, to the tune of about $600,000 a year from facility rentals such as weddings, conferences and other special events. Annual maintenance costs are estimated at $40,000 to $60,000.

Miner said no work would be done that includes placing the pavilion on grades above the 20, 50 or 100-year flood lines, noting the group will only participate in a building at ground level as was indicated in Wright’s original plans.

“The issue of the building sitting in water for approximately 30 days every 25 years, which is what led to the first building’s decay and ultimate demolition, has been addressed and solved,” he said, referring to a specialized wood treatment system to make the wood foundation impermeable to water.

A planting schedule will not be needed because Wright included no instructions for foliage in his original designs, Miner said, and the preliminary environmental assessment requirement “is so ludicrous it will not be considered.”

“Keeping the integrity of the pavilion’s original design is of paramount importance to us,” he said, noting there has already been compromise because the skateboard park is built on the building’s original footprint.

Miner said re-creating the Banff Pavilion is an incredible, once-in-a-lifetime opportunity being offered to the Banff community.

“We are still willing to complete this historic project in the spirit and with the enthusiasm with which it was begun,” he said. “Not to do so would be a second tragedy in the story of the Banff Pavilion.”