BANFF – A grizzly bear has killed one of three black bear cubs abandoned in a roadside washroom in 2017 and subsequently released into the wilds of Banff National Park earlier this summer.
0
Sep 12, 2018 2:30 PM By: Cathy Ellis 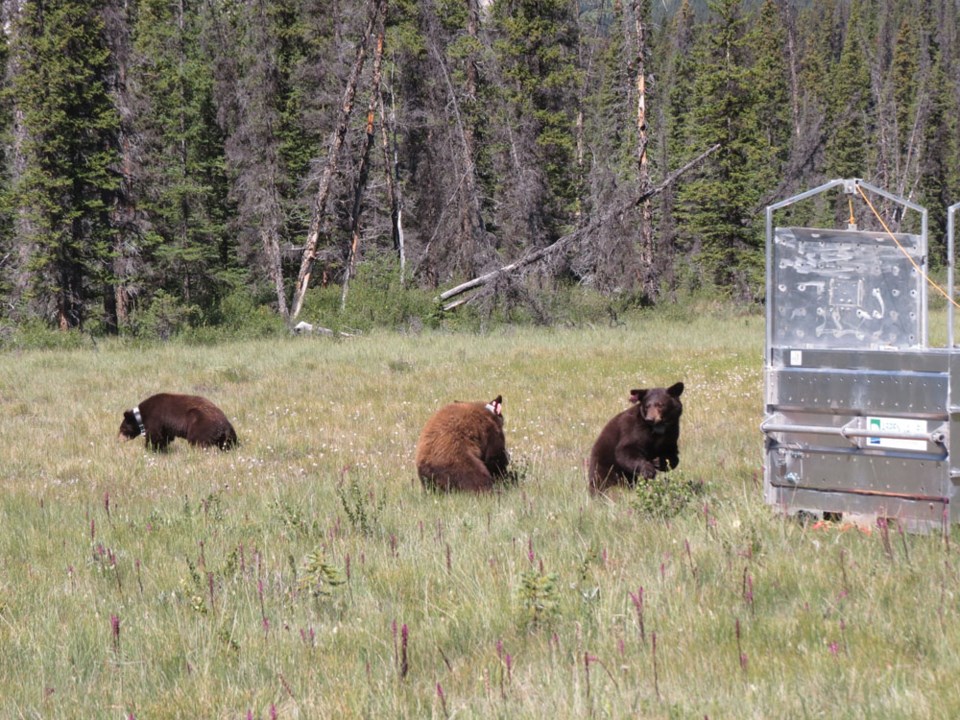 Three orphaned black bear cubs were released back into the wild by Parks Canada on July 17 after spending 15 months at a wildlife sanctuary in Ontario. One of the cubs was killed by a grizzly bear at the end of August, but Parks Canada has confirmed the other two have successfully found den sites for the winter in Banff National Park.

BANFF – A grizzly bear has killed one of three black bear cubs abandoned in a roadside washroom in 2017 and subsequently released into the wilds of Banff National Park earlier this summer.

The movements of the female cubs, which spent 15 months in a wildlife rehabilitation centre in Ontario before their release, are being tracked via GPS collars. One of the collars let off a mortality signal in late August.

Bill Hunt, resource conservation manager for Banff National Park, said when staff went to investigate, they found the yearling black bear cub had been killed by a grizzly bear in a thick patch of buffalo berries in the Clearwater region of the park.

He said the survival rate for young orphaned bears is lower than bears with a mother to rely on, noting this was a natural predation by, presumably, a much larger male bear.

“Staff felt it was likely to be a grizzly bear based on a puncture mark in the skull of the yearling, the fact it was a large disturbed area and most of the carcass had been consumed, which would be typical of a grizzly bear,” he said.

“The other two cubs, we think, are doing well. One of the collars hasn’t uploaded recently, but that sometimes happens, and we’ll obviously keep an eye on that.”

Three abandoned female cubs were discovered just before midnight on April 1, 2017 in a roadside washroom on the Trans-Canada Highway at a viewpoint overlooking Vermilion Lakes just west of Banff.

There was no sign of the mother bear at the time they were found and, despite an extensive three-day search and a check of wildlife cameras there, wildlife staff could not find the cubs’ mother.

At the time, Alberta had a policy that banned the rescue, rehabilitation and release of bears into the wild so Parks Canada, after looking at its options, sent the three sister bears to Aspen Valley Wildlife Sanctuary in Muskoka, Ont.

They were about three months old and weighed about three kilograms when they went to Ontario, and at the time of their release into Banff’s backcountry on July 17, they were a healthy 50 kilograms.

Black bear offspring typically remain with their mothers for a year or longer, depending on the tolerance level of the mother, but the three split up within days of being released and went in different directions.

Hunt said it was thought the yearlings would stay together given the fact they’d spent a long time bonding at the wildlife rehab centre and were without a mother to teach them how to survive.

“I think we were all surprised that they split up so quickly,” he said, noting Parks will continue to monitor the two surviving yearlings.

“Once a mother kicks them out, they will generally hang together a little bit. Especially because of how they were raised together without a mother, a lot of us expected they might be a bit more bonded than that.”

GPS data has revealed some interesting information, indicating the yearling killed by the grizzly was the biggest wanderer. Another stayed relatively close to the release site and the third ventured a little further afield.

The one killed travelled hundreds of kilometres after its release in mid-July, briefly venturing out onto provincial lands near the Red Deer River Valley along the eastern slopes.

Hunt said the yearling was nowhere near towns, adding there were no conflicts with people or livestock.

“She moved several valleys away and in a fairly short time,” he said. “It was fairly difficult terrain and we were impressed with some of the routes she chose.”

During their time at the Ontario wildlife sanctuary, special efforts were made to ensure the bears had minimal interactions with people in an effort to help them adapt to being back in the wild.

The bears were initially fed formula from a bottle, but when they were big enough to eat solid food, they were released into a large enclosure within 470 acres of natural habitat at the facility. Food was then thrown over the fence.

Howard Smith, general manager of Aspen Valley Wildlife Sanctuary, was unavailable for comment before press time, but Hunt said everything was done to give the bears the best shot at survival.

“The bears were found in a very unfortunate situation where someone had handled them and released them in a washroom,” he said.

“I think we have given them the best chance possible, and this was a natural predation event.”

In terms of using the three bears as an assessment for successful rehabilitation of bears, Hunt said it’s important to keep in mind this is a sample size of three individual animals.

But, he said, GPS tracking data does provide interesting information which could be used in a nationwide assessment of bear rehabilitation efforts and release approaches.

“Although the bears will play an important role towards research, it’s too small a sample size to draw meaningful conclusions,” he said.

Under the former policy, which came into effect in 2010, at least 25 orphaned bear cubs were killed across the province.

It’s still not known how the bears came to be trapped and locked in the washroom. The trail became colder for law enforcement wardens investigating the case as more time passed.

One of the theories at the time speculated the bears might have come from B.C. where it was spring bear hunting season, and then dumped in Banff.

“It would have been nice to know where home was,” said Hunt.