BANFF – A wolf collared for research purposes in Banff National Park has been trapped and killed on neighbouring provincial lands.
0
Dec 13, 2018 12:00 AM By: Cathy Ellis 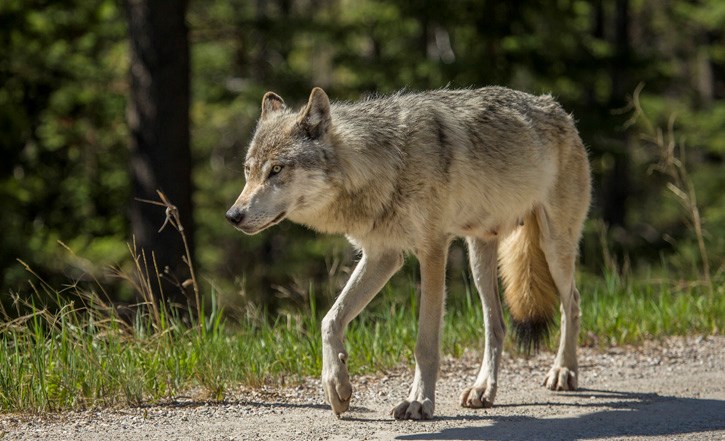 Wildlife corridors was one of the key concerns Bow Valley reisdents identified in the inaugural Vital Signs report, proudced by the Banff Canmore Community Foundation.

BANFF – A wolf collared for research purposes in Banff National Park has been trapped and killed on neighbouring provincial lands.

The death of this female wolf follows the loss of another collared female wolf from this pack that fell off a cliff in the north fork of the Cascade River Valley in early summer. Only one wolf remains in the Cascade-Panther pack.

Parks Canada officials say wolf 1801’s GPS collar let off a mortality signal on Dec. 3 along the Panther River, about six kilometres east of Banff National Park, which led staff finishing a shift on the bison project to investigate.

“They found the wolf caught in a snare,” said Jesse Whittington, a wildlife ecologist for Banff National Park. “That’s a common source of mortality that wolves face when they travel outside of the park.”

Officials with the Alberta government would not grant an interview request to the Outlook, which hoped to confirm the number of wolves that are trapped in snares on the eastern boundary of the park.

“It’s truly unfortunate, but wolves are allowed to roam freely in and around Banff National Park.”

Remote camera footage and snow tracking shows wolf 1801, first collared in January this year when she was about two years old, had been travelling with another wolf.

Whittington said wolves commonly travel together at this time of year in cohesive packs, whereas they tend to split up more in summer.

“One of the good things about wolves is they have high dispersal rates and can recolonize territories fairly quickly,” he said. “We’ll continue to monitor to see if wolves use that area.”

The wolves in this pack were collared, in part, for research associated with the reintroduction of plains bison into Banff National Park, to look at how wolves may affect bison movements and if wolves would include bison in their diet.

The Red Deer pack, which also travels throughout the bison reintroduction zone, has one wolf fitted with a GPS collar. Images recently downloaded from remote cameras show there are eight wolves in that pack.

“Our decision on whether or not we re-collar will depend partly on what we find in that area for wolves throughout the winter,” said Whittington.

Over the years, numbers in the Cascade-Panther wolf pack have fluctuated between three and nine individuals. It appears the pack didn’t den in spring.

“It’s relatively common that some wolf packs, even backcountry wolf packs, are unable to den, or successfully raise pups some years,” said Whittington

“We don’t know why, but it could be influenced by their prey base. If there’s not a lot of prey, they’ll have less success breeding.”

A week before wolf 1801 was trapped and killed in the snare, she was hunting near Lake Minnewanka.

Whittington said the two wolves travelled from the Lake Minnewanka through the Cascade, Dormer and Panther river valleys over four days from Nov. 25-28 before 1801 was trapped just outside the park.

He said the pack was in the area of Norquay ski hill several times earlier this winter.

“It’s been neat to watch the movements of this pack,” he said. “They go so fast.”

While about 90 per cent of the Cascade-Panther pack’s range is within Banff National Park, wolves from this pack and the Red Deer pack do venture outside the park where they are trapped.

“We spend a lot of time trying to reduce human causes of mortality inside the park and ideally we’d like predator-prey populations to fluctuate naturally,” said Whittington.

“They face hazards inside the park, including vehicles and trains, but these wolves travel large distances and one of the hazards outside the park is hunting and trapping.”