“It’s important to have people that are encouraging, that are mentors, that are telling their friends that anybody can do it [get outside].”
0
Nov 5, 2019 2:53 PM By: Chelsea Kemp 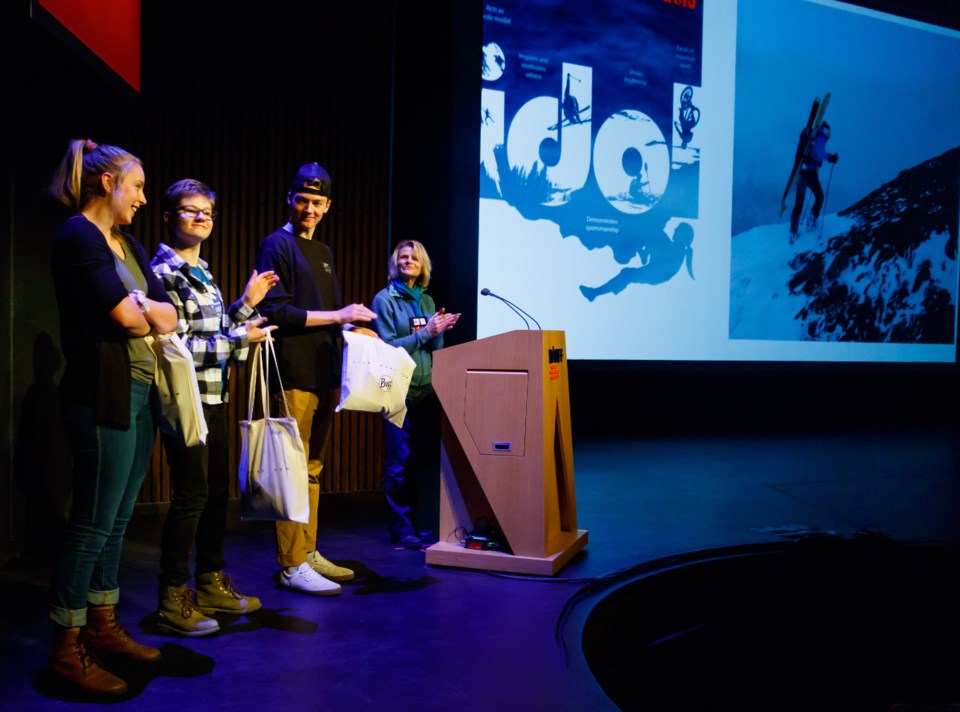 BANFF — Embodying the spirit of the Rockies and a love of the great outdoors, Jack Menzies, 17, was named the 2019 Mountain Idol at the Banff Centre Mountain Film and Book Festival on Oct. 28, during the Radical Reels event.

It was an amazing feeling walking away from the show with the Mountain Idol title, Menzies said, especially because he grew up looking up to past winners.

“It’s pretty crazy,” he said. “It’s pretty surreal to finally go up there — I’m very proud to be one athlete picked from a group of so many great athletes in the Bow Valley.”

Describing himself as a “naturally competitive person,” Menzies has made a name for himself competing in enduro mountain bike riding.

It has been a great experience growing up in the sport, Menzies said, adding that he has enjoyed the opportunity to be a part of the changes taking place in the racing scene.

He appreciates the support and guidance he has received from his coaches over the years who pushed him to this level. Menzies said that the passion shared among those in the mountain biking community helps fuel his love of the sport.

“It’s a fun aspect of riding,” he said. “If you’re having fun, you’re going to go fast and get places.”

Laurie Harvey said she helped found the Mountain Idol award eight years ago in the hopes that it would inspire Bow Valley youth to embrace a love of the great outdoors.

“At the time we were concerned with developing the next generation of … young people in the outdoors,” she said. “To ensure that people felt good about being in the outdoors.”

It can prove challenging fostering this passion, she said, explaining that while many high school students play team sports like hockey, basketball, volleyball or other team-based sports it can be difficult for outdoor athletes because they are often doing things on their own.

“We felt the need to encourage them and recognize them publicly,” Harvey said.

Menzies has participated in a wide variety of downhill sports, Harvey said, finding success in almost everything he tries.

The Mountain Idol embodies the qualities that make a great outdoors person and community member, she added, explaining they look for people who excel in their chosen sport, advocate for their sport, show good sportsmanship, act as an ambassador for the outdoors and serve as mentors in the community.

Also a finalist for this year's Mountain Idol competition was Anya Morgan, 15, the first para-athlete to be recognized in the competition.

Morgan was a para-alpine skiing member on Team Alberta at the 2019 Canada Winter Games and the sole representative and competitor for Team Great Britain at the 2019 Canadian and United States National Para-Alpine Championships where she placed eighth.

Morgan was the 2019 women’s ambulatory 100-metre sprint provincial champion. Serving as a proud member of the Girl Guides of Canada National Youth Council since 2018, she won the Chairman’s Award at iGem in 2018.

Joining Morgan and Menzies on the Mountain idol podium, Jaiden Webster, 17, was also named as a finalist for the award.

Webster was the first female athlete finisher in the 2019 Kananaskis Ski Marathon (42 kilometres).

Giving back to the Bow Valley sporting community is Webster’s passion, and she serves as a mentor for young athletes as a soccer coach and Nordic skiing instructor.

As co-president of the Canmore Collegiate High School 2019 Green Club, Webster is dedicated to advocating for the environment and climate action. Webster relishes spending as much time as possible in the mountains and enjoys biking, trail running, backcountry skiing, summits and ridgelines and swimming in alpine lakes.

All three finalists play an important role in encouraging others to get outside and play, Harvey said. She added that Mountain Idol is one way of acknowledging their efforts.

“It’s rewarding them for being outdoors,” she said, explaining that the award helps get youth excited to go outside. “It’s important to have people that are encouraging, that are mentors, that are telling their friends that anybody can do it [get outside].”

The Mountain Idol is open to any youth who loves the great outdoors, Harvey said, explaining that they do not have to be at the top of their sport to win.

“It’s important to us to have that positive personality, that welcoming spirit and that encouraging kind of person,” Harvey said.

Nominations are open for 2020 Mountain Idol. To nominate a mountain sport athlete under the age of 23 who lives in the geographic area between Lake Louise and Exshaw visit banffcentre.ca/banff-mountain-idol-competition.