“We’ve noticed more situations this spring where we’ve had elk in the townsite,” said Blair Fyten, a human-wildlife coexistence specialist for Banff National Park. “It’s quieter, so these elk probably feel a little safer coming in and utilizing some of the lawns that are turning green.”
May 12, 2020 5:53 PM By: Cathy Ellis 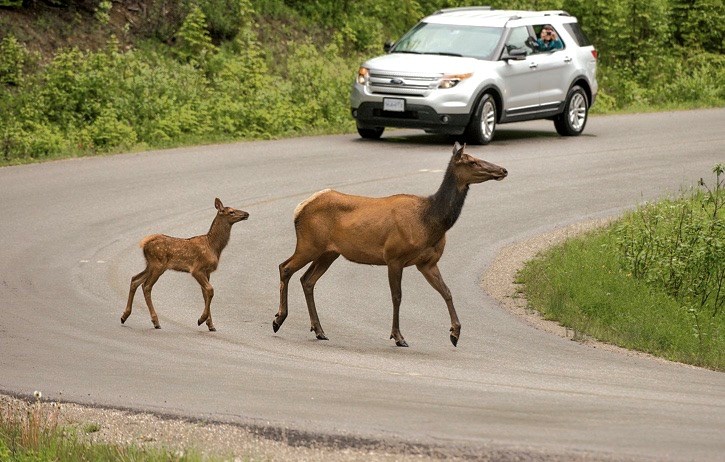 BANFF – Parks Canada has concerns that pregnant elk may give birth to their calves inside the townsite this year.

The tourist town has been much quieter than usual this spring with the COVID-19 restrictions shutting down visitation to the town and surrounding national park for the last several weeks.

“It’s quieter, so these elk probably feel a little safer coming in and utilizing some of the lawns that are turning green.”

As is usual practice, Parks Canada will continue its hazing efforts whenever elk come inside town boundaries.

“We’re a little worried that they might tend to have some of their calves in town, more so than they have in the past,” said Fyten.

“We will have to wait and see. Maybe they will move off individually, somewhere on the outskirts of town,” he added,

“We are watching that closely to see if some of these cows that have been frequenting the townsite are going to use if for elk calving.”

The elk calving season, which typically runs May 15 until June 30, is a time of year when protective mother elk will aggressively protect their newborns, by charging or striking out with sharp hooves.

For the second year in a row, Parks Canada has taken proactive steps to close the west slopes of Tunnel Mountain to give a secure place for elk to give birth and to prevent any elk attacks on people.

Fyten said the west slopes of Tunnel Mountain are important calving grounds for elk, with wildlife specialists having relocated elk from the grounds of the Banff Centre frequently over the years to avoid dangerous encounters with people.

“I think it’s a bit of a predator refuge,” said Fyten, adding the area is in close proximity to roads and human use.

“We want to proactively give elk some space to have their calves in that area.”

Fyten isn’t aware of the brith of any calves yet, but it may only be a matter of days. The peak of the calving season won’t be for at least another three weeks.

“Usually, you can start seeing some of the first calves around the 12th to the 15th [of May],” he said.

“We do have some cows that are off by themselves, which could indicate that they are getting ready to give birth.”

A newborn calf is defenceless against predators for the first three weeks of its life, so cow elk keep newborns well hidden in bushes and shrubs. The mother elk visits the calf only a few times a day, standing guard not too far away.

The mother licks her calf all over to make sure it is perfectly clean and clear of any smells that could attract predators. With its lack of smell and spotted coat, a calf is often well camouflaged.

“When the calves are born, they are not very mobile for the first five to six days and they stay pretty tight to their mom and just stay hidden,” said Fyten.

“The mothers will go off and feed a distance from them, but they’re always keeping a watchful eye back to where their young is,” he added.

“As they get a little stronger and a little bigger, then they start getting up and moving around with their mothers a little bit.”

To avoid an elk encounter, Parks Canada recommends people stay at least 30 metres away; avoid lone female elk because they separate from the herd for calving and may have calves nearby; walk on open roads rather than forest trails to avoid stumbling upon females elk or calves; keep children close; and carry a walking stick, pepper spray or umbrella.

In addition, dogs must be kept on leash at all times, as required by law in the national park.

“We know there’s lots of people in town with dogs and sometimes the elk look at those dogs as predators,” said Fyten. “Dogs can provoke an attack.”

Parks Canada asks that any incidents be reported to Banff’s resource conservation office at 403-762-1470.