“There’s a growing dialogue and body of scientific knowledge on the effect of fences on wildlife and the effectiveness of fences as a management tool, and so we’re really excited as a team to be bringing bison back, on behalf of all Canadians, to Banff National Park."
Jan 21, 2021 11:00 AM By: Jamey Glasnovic 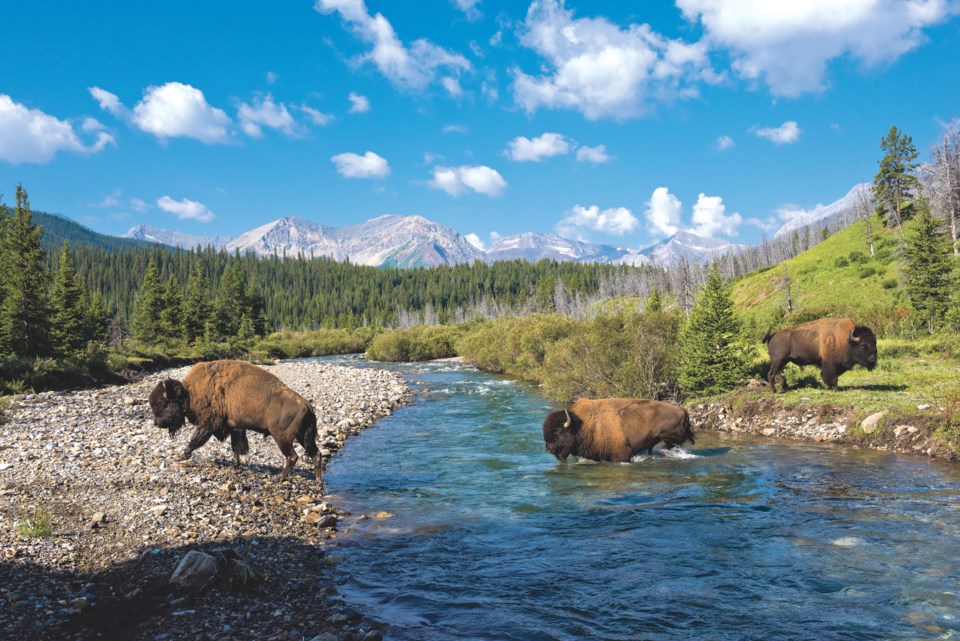 PANTHER VALLEY – The Banff bison herd has settled down well in Banff National Park, but reintroducing North America’s largest land mammal into one of its historic ranges is not as simple as importing a collection of animals and letting them loose on the landscape.

To help the plains bison anchor to their new home, one of the management tools used by the Parks Canada bison reintroduction team has been strategically placed drift fences, and the team has released the results of their study on fence design and the subsequent effect on wildlife, which has been published online in the academic journal Wildlife Biology.

“It’s a lot like you would expect a fence to look like elsewhere,” said bison reintroduction team member and research paper co-author Dillon Watt, in reference to the six designs that they started out with at the beginning of the study.

“But what was important for us was how the wire and rails were set up, in terms of their number and spacing, to meet this seemingly contradictory set of objectives of containing reintroduced bison, while allowing other species to pass through.”

Wildlife friendly fencing is not an entirely new concept, but the team did need to figure out how to control bison movements in key areas without disrupting the behaviour of other species, such as elk, deer, wolves and cougars. A total of twelve species were taken into consideration.

“We were able to build on what had already been established in the literature and with guidelines, but really there was a lot of adapting our design as we went and as we learned,” Watt said.

“We learned that different species have very different strategies for crossing the fence. For example, deer tend to go under, elk tend to jump over. So, we narrowed in on a design that accommodates these different crossing strategies to maximize the permeability for all species.”

The team began monitoring animal movement and tested fences using remote cameras in 2015. Thirty-four remote trail cameras were set up to shoot still pictures and video at select fence locations. The images were then analyzed in conjunction with GPS radio collar telemetry to determine the permeability of the designs and overall movement patterns of the resident species who encountered the fences.

The bison arrived at a soft release pasture in the Panther Valley in 2017, where they spent 18 months getting used to their new surroundings. They were then released into a 1,200 square kilometre home range in the summer of 2018, and further study was undertaken to figure out if the fences really could deter an animal as large as a bison.

Apart from a few instances where determined bulls ventured outside the reintroduction zone, there have not been many concerns.

“The fences have been largely successful at containing the bison,” Watt said, “and our study showed us that other species are able to cross the fences and that the fences don’t disrupt their movement and migration patterns.”

This is good news, and not just for the long-term prospects of having bison roaming free in Banff National Park.

“We know now globally that species reintroductions are a really important tool in restoring ecosystems, and finding large, wild, un-fragmented places is getting more and more difficult," Watt said. "So well beyond our project, our work forms a contribution to this overall science of restoring animals in discreet areas.”

In addition to the strategically placed fencing, the reintroduction team has used other tools to encourage the bison to anchor to the new home range, including prescribed fire to improve habitat and gently herding the animals when they get too close to the edges of the reintroduction zone. Part of the original containment in the soft release pasture also included two calving cycles in home territory.

“We’ve used all these tools to encourage them to anchor here, but of course they’re wild animals, it’s the opportunity to learn what they do that’s very exciting for the team.”

As the team continues to take cues from the bison some key areas of fencing have been set at bison-deflection configuration full time (a five-wire design), but most remains wildlife-permeable (a two-wire design) unless the bison move toward that particular fence. Some fence has already been removed completely.

The front range of the Rocky Mountains naturally contains a large portion of the reintroduction zone, and a total of six-and-a-half kilometres of fence remains in six sections, that range in length from 50 metres to two-and-a-half kilometres. It is expected that more fence will come down in the future.

“Looking ahead, the bigger picture decision on the fences, their placement, the number, [all] feeds into the end of the pilot phase of this project, which wraps up in 2022,” Watt said, indicating that the research presented in the paper will support evidence-based management decision making at that time.

Meanwhile, the science behind bringing large mammals back to historic ranges continues to expand, furthering the understanding of habitat restoration and the importance of keystone species in relation to their ecosystems.

“There’s a growing dialogue and body of scientific knowledge on the effect of fences on wildlife and the effectiveness of fences as a management tool, and so we’re really excited as a team to be bringing bison back, on behalf of all Canadians, to Banff National Park,” Watt said.

“But, at the same time it’s given us this opportunity to make contributions to the larger body of reintroduction and conservation science.”

David N. Laskin, Jesse Whittington and Karsten Heuer co-authored the paper with Watt, which can be found at wildlifebiology.org. To follow developments with the Banff bison herd, go to the Parks Canada plains bison reintroduction blog.