BANFF – A female grizzly bear has become the second grizzly to be fatally injured by a vehicle in Banff National Park in the past month.
0
Jun 24, 2019 5:22 PM By: Paul Clarke 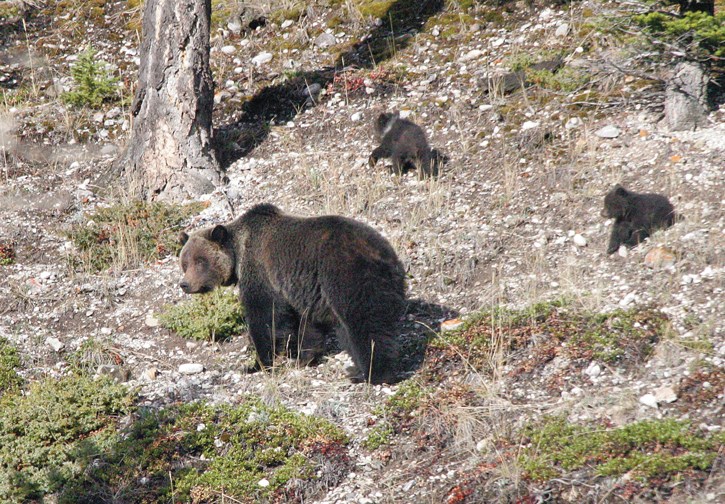 A female grizzly bear forages on a low slope of the Fairholme Range between Banff and Canmore with her two new of year cubs during the summer of 2012.

BANFF – A female grizzly bear has become the second grizzly to be fatally injured by a vehicle in Banff National Park in the past month.

According to Parks Canada, the yearling bear cub was likely struck by a vehicle on the Trans-Canada Highway near the Sunshine access road earlier this month, however, the injured bear wasn’t discovered until Saturday (June 22).

Bill Hunt, resource conservation manager for Banff National Park, said the bear cub was found visibly limping due to a severe injury to its back right leg and was unable to bear weight on its right front paw.

He said the injuries were consistent with a vehicle strike.

“Ten days early earlier Parks Canada received a report of bears inside the highway fence near the Sunshine interchange of the Trans-Canada Highway,” said Hunt, explaining it was with its mother and another yearling cub.

“Upon investigation, blood was observed on the Trans-Canada Highway, but no one reported a wildlife strike to Parks Canada.”

On Saturday, Hunt said Parks Canada received a report of an injured bear on the access road to Sunshine Village and upon finding it, resource conservation officers decided to tranquilize it the following day so a wildlife veterinarian could assess its injuries and its state of health.

After undergoing a thorough assessment, the veterinarian found the bear had suffered an open compound fracture on its right hind leg, as well as injuries to its right front leg.

Hunt said its injuries were too severe for the animal to recover, so the bear was euthanized to prevent further suffering. A full autopsy will be conducted to assess the animal for other internal injuries.

On June 4, an adult male grizzly bear was killed after being hit by a semi-trailer on Highway 93 South, about one kilometre south of the Trans-Canada Highway heading up the hill towards Storm Mountain.

The driver of the truck immediately stopped after hitting the 295-pound animal and reported the accident to Parks Canada.

Hunt said its common for bears to be travelling through the valley bottom during this time of year because a lot of areas are still affected by snow, however, he remained hopeful the two accidents were anomalies.

“I’m hopeful it’s more of a coincidence than a pattern,” said Hunt, adding the mother bear her other cub appear to be doing fine.

The last human-caused grizzly bear death in Banff was in July 2014, when a young collared adult male bear was killed on the Icefields Parkway near Hector Lake viewpoint.

Hunt credited the highway's wildlife fencing and animal crossing structures for reducing the number of wildlife-vehicle collisions by more than 80 per cent.

“The Trans-Canada Highway through Banff National Park is one of the most successful highways in the world for managing effects on wildlife with fencing to prevent most wildlife from getting onto the highway and crossing structures to maintain wildlife movements, however wildlife occasionally do get onto the highway,” said Hunt.

“This is one of the key reasons that speed limits in Banff National Park remain at 90 kilometres per hour or less and motorists are reminded to remain watchful for wildlife on all roadways within the national park.”

According to Hunt, Banff’s last female grizzly bear death was in July 2011, when a five-and-a-half year-old bear known as bear No. 108 was struck on the Trans-Canada Highway near Castle Mountain.

Bear 148, who spent 90 per cent of her time in Banff, is not considered in the mortality data because her death in 2017 was outside the park. After several run-ins with people in Canmore, she was moved by provincial wildlife officials several hundreds of kilometres away north of Jasper, but was shot by a hunter in B.C. within months.

According to Parks Canada’s database, there have been 15 human-caused grizzly bear deaths in Banff National Park since 2005 and there are currently an estimated 65 grizzlies in the park.

Hunt strongly encouraged anyone who hits an animal to call Parks Canada so another animal doesn’t have to suffer for 10-days before they either die from their injuries or have to be euthanized.

With files from Cathy Ellis