“It is important that we remember spread of the virus can and will occur any time if we don’t continue to limit our close contacts with each other … 96 per cent of our total case count has occurred since the last week of October.”
Dec 10, 2020 2:16 PM By: Cathy Ellis 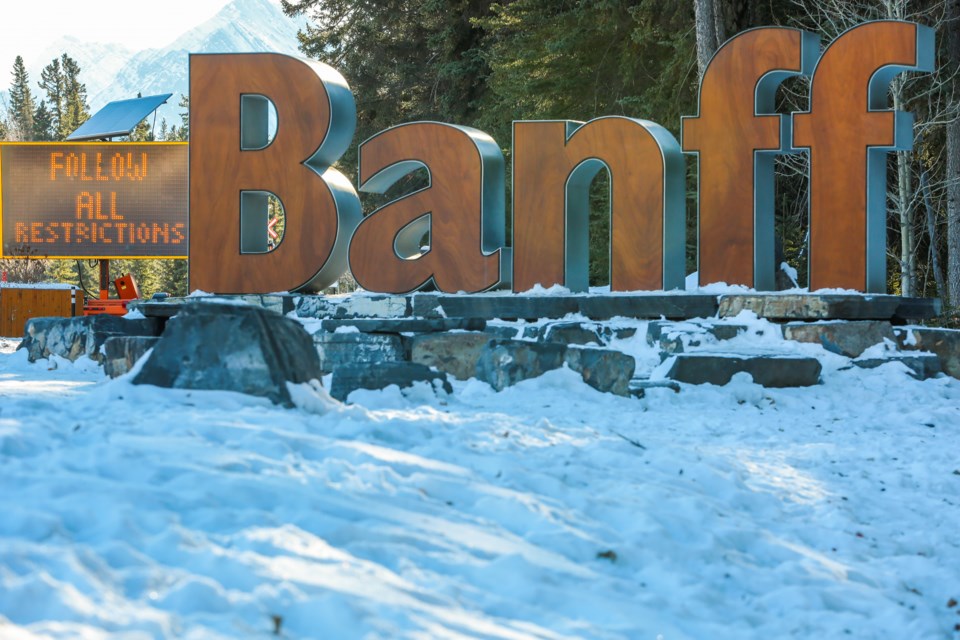 A sign erected at the Mount Norquay Road entrance to Banff notifies visitors of the active number of COVID-19 cases in the town on Tuesday (Dec. 1). The Town of Banff declared a state of local emergency in tandem with the measures enacted under the Provincial Public Health Emergency, to stop the spread of COVID-19. EVAN BUHLER RMO PHOTO

BANFF – Most of Banff’s 324 positive COVID-19 cases have occurred over the past five weeks.

While Banff’s active cases dropping to 109 on Tuesday (Dec. 8) from a high of 192 on Nov. 29 is a promising trend locally, Town of Banff officials stress it is important to remember “there is still COVID spreading in our community.”

While 215 people have recovered from the virus in Banff and Lake Louise since the start of the pandemic, the region covering Banff National Park added more than 60 new cases over the past week-and-a-half.

“While these are certainly encouraging developments, I cannot stress enough that we must not let our guard down,” said Alison Gerrits, the Town of Banff’s acting director of emergency management.

“It is important that we remember spread of the virus can and will occur any time if we don’t continue to limit our close contacts with each other … 96 per cent of our total case count has occurred since the last week of October.”

The picture province-wide is even worse.

There are 654 people in hospital due to COVID-19, including 112 in intensive care. Alberta’s death toll due to the virus grew to 640.

In Canmore, there were 49 active cases as of Dec. 8 – considerably down from the previous week – and in the MD of Bighorn, which includes Harvie Heights, Exshaw and Lac des Arcs, 40 positive cases.

Concerned with the uncontrolled growth of the virus, the provincial government this week announced a shutdown of most businesses for at least a four-week period, effective Sunday (Dec. 13).

In announcing the new restrictions on Tuesday (Dec. 8), Premier Jason Kenney said new cases, hospitalizations and deaths as a result of COVID-19 are growing at an “alarming rate.”

“It means more deaths, especially among our most elderly and vulnerable.”

The province’s new measures include an extension of the ban on indoor social gatherings to include outdoor social get-togethers other than with immediate family in the same household, effective immediately.

Effective Dec. 13, most businesses have been ordered to close, however restaurants, pubs, bars, lounges and cafés can offer takeout, curbside pickup and delivery services.

While all out-of-town travel has been discouraged, hotels and ski hills, including Lake Louise, Sunshine and Mount Norquay, will be allowed to stay open.

“Hotels can also remain open, but will have to close pools, fitness centres, related services and restaurants.”

In Banff, the state of local emergency remains in effect, with no plans to lift that any time soon.

Mayor Karen Sorensen said she believes the new provincial government restrictions were “the right thing to do” to keep people safe and prevent the spread of the virus.

“The cases in the Banff area are going down, but provincially that is not the situation,” she said immediately after Kenney’s announcement.

With the forced closure of many businesses, Sorensen said those businesses can now access federal financial supports.

“With the business closures being directed by the province, which is who has the authority to do that, a lot of businesses in the community will be able to access federal financial aid rather than continuing to struggle at a loss, as they have been doing,” she said.

"When they're told they have to close, then that changes the picture as far as being able to collect on some of the financial aids available due to COVID."

Regarding ski hills, Sorensen said she appreciates the intention to allow people to recreate outdoors in an appropriate way.

"I also understand that the ski hills are doing a very good job of putting protocols in place and doing what they can to keep people safe and so I respect that," she said.

"My sense in the next few weeks, because our businesses are closed, I have to assume that we won't have skiers stopping in here for drinks or dinner or shopping around their ski vacation."

While hotels are allowed to stay open, some may voluntarily decide to close, particularly given the recommendation against travel.

“The hotels are not doing well,” said Sorensen. “The last I heard was 10 and 20 per cent occupancy and that was before today.”

A day before the provincial government announcement, Mayor Sorensen had fired off a letter to Health Minister Tyler Shandro calling for “consistency across the province, rather than a patchwork approach.”

“Our community is currently struggling with our current case counts of COVID 19, and just like other urban areas, are facing a myriad of challenges related to the spread of this virus,” she said in her Dec. 7 letter.

As of Sunday, she said the Banff and Lake Louise region had an active case count of 888 per 100,000 population, representing the seventh highest active case count per capita in the province, reduced from the highest the previous week.

“We continue to struggle with new cases and the impacts to our local business community have been significant due to staffing shortages related to isolation,” she said.

In her letter, Mayor Sorensen said that should closures be mandated by the province, local businesses could make use of the various financial supports in place, but these are currently tied to government closures.

“We ask that any restrictions imposed be applied equally based on status level or per capita case counts, not on population size alone,” she said.

Canmore Mayor John Borrowman wrote a similar letter to the health minister on Tuesday (Dec. 8), arguing any restrictive measures should be applied consistently to all areas on enhanced status.

“We are generally welcoming of our fellow Albertans, who love to come out to recreate in the mountains and enjoy all the many services that our businesses offer,” he wrote.

“However, we have been more cautious in our welcome throughout the past many months, and have echoed the recommendations of yourself and Dr. Hinshaw that Albertans avoid unnecessary travel.”

A special meeting of Canmore council was set for Thursday (Dec. 10) to consider the effects of the new provincial regulations on municipal operations and to determine if additional measures need to be implemented in the community.

Up until now, Kenney said the government has preferred to take a regional approach with its COVID-19 restrictions, but concluded this is no longer a viable option.

“In fact, 97 per cent of Albertans live today in a local geographic area with more than 50 active COVID cases per 100,000 population – and that was our key threshold,” he said.

“The virus is spreading at an alarming rate in every region of the province.”

To respond to the growth of COVID-19 cases and hospitalizations, Kenney said thousands of surgeries and other medical procedures have been postponed or cancelled.

“For every one of those people affected, this means anxiety, stress, sometimes it means real physical pain and suffering as their health deteriorates,” he said.

“For some Albertans, delaying their health care will tragically mean a shorter lifespan.”

Kenney said the heath-care system has the capacity – if stretched – to treat more than 2,000 COVID-19 patients in hospital beds and hundreds in intensive care units.

“But we know that if we allow viral spread at current growth rates we will eventually run out of hospital capacity,” he said.

“If you think that’s exaggerated, just look at what’s happened in several U.S. hospitals south of the border to see the tragic reality of uncontrolled growth of the virus.”

The site is open Mondays through Fridays from 9:30 a.m. to 5 p.m.. Testing is available for COVID-19 symptomatic individuals or close contacts of positive cases only. Appointments must be booked in advance online, or by calling 811.

“With this testing now in place, in addition to the testing still occurring through our local doctors’ offices in both Banff and Lake Louise, we are feeling quite confident with our testing capacity at the current time,” Gerrits said.

Gerrits said there were 740 COVID-19 tests conducted in Banff and the ID9 region last week.

She said Alberta Health Services offered asymptomatic testing for employees at businesses – where more than five cases had been identified over the previous two weeks – at the Fenlands recreation centre on Dec. 2.

“We have been assured by the office of the medical officer of health that should any large outbreaks be identified in our area, that the mobile testing team would be made available again on site at any affected locations,” Gerrits said.

Since the new 23-room isolation facility opened at the Banff Centre on Nov. 30, 11 people who were unable to isolate in the current home have stayed there.

“Food support is available for those in isolation if needed, and daily wellness checks are provided for everyone.”

Dr. Deena Hinshaw, Alberta’s top medical officer of health, said more than 72,000 Albertans have been diagnosed with the virus since the first case was confirmed on March 5, 2020.

“If you gathered everyone who has been diagnosed with COVID together, it would be the fifth-largest city in Alberta,” she said.

Two months ago, on Oct. 8, the province’s positivity rate was 1.34 per cent and there were just 184 new cases across the province.

“We have seen the virus touch every region and age group. Our youngest reported case was less than one year old, and our oldest was 108. Many of those who’ve recovered have faced lingering side effects and serious outcomes.”

Hinshaw said the quickest path to get ahead of the current growth of the virus is embrace the new provincial restrictions in place for at least the next four weeks.

“I know it is hard, but I ask you to be diligent, be patient and to keep going,” she said.

“We need to go above and beyond to keep ourselves, our families and our communities safe.”