Who's the boss? Grizzly bear 122 continues to dominate the Bow Valley 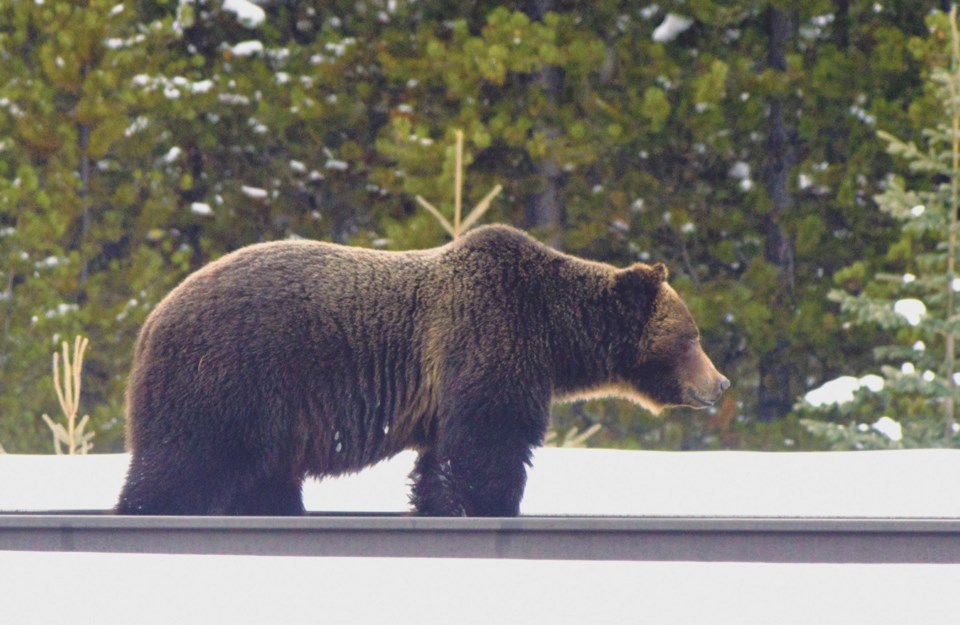 BANFF – The Boss is heading into another year of his life as the dominant male grizzly bear in the Bow Valley.

Believed to be about 20 years old, the Bow Valley’s biggest and toughest male grizzly, known as No. 122, has been out of his den since the end of February going about his business in search of food.

“He’s getting up there in age,” said Dan Rafla, a human-wildlife coexistence specialist for Banff National Park.

“Male grizzlies can range in age from 20 to 30 years of age. It may be a little bit less, but rarely is it longer than that.”

Bear No. 122, estimated to be about 500 to 600 pounds when he went into his den for winter, has been the dominant male of the Bow Valley over the last decade.

His main rivals include No. 136, nicknamed Split Lip for his disfigured mouth, and a younger bear known as No. 126, one of the last bears into the den in December.

Rafla said bear 122 has been successful as the dominant bear, meaning that he has bred with most of the female bears in the area and has access to the best food sources.

“That may change as a result of age when you may not be as strong or may have more injuries to contend with, or you have a younger, fitter bear that might supplant you from being that dominant animal,” said Rafla.

That being said, that does not mean bear 122 will be pushed out of the area as the dominance hierarchy plays out over time.

“Just like anything with age over time, he may still be a dominant bear in some regards, but may not be so in terms of breeding with all the females he has in the past in this area,” said Rafla.

“This doesn’t mean he’s going to disappear from the landscape. He may still be around for years to come, but he may not be in the same role that we’ve traditionally seen him in for the last five to 10 years.”

When he was spotted by a park resource conservation officer doing field work near the Sunshine interchange on Feb. 28, bear No. 122 still appeared healthy, though slightly leaner having come out of hibernation.

“From staff who have seen him earlier this spring, he looks relatively healthy and he’s moving without issue,” said Rafla.

“He looks like he still has some nice fat reserves, and from folks who have seen him, he still looks like regular 122 from past years.”

In 2013, bear No. 122 made national headlines when he killed and ate a black bear along Sundance Canyon trail. While predatory attacks are not that common, there was also evidence suggesting he may have have eaten another black bear the year before.

He’s boldly strolled through Banff’s Central Park in broad daylight and forced construction of an electric fence around a former dumpsite near Castle Mountain when he got into steak bones and corn cobs.

Bear 122’s closest rival is Split Lip, who has a bit of a badass reputation, too. While his exact age is unknown, wildlife experts suspect he is probably close to 20 years old as well.

In 2017, Split Lip caused anxious moments when he tried to amble over the pedestrian bridge across the Bow River in Banff, and while he wasn’t aggressive, he also wasn’t giving way to about 20 hikers on a trail at Johnston Canyon in 2016.

Like bear 122, he appears to have a taste for other bears on occasion.

He possibly killed, but definitely ate, a black bear in the remote Mystic Pass area in 2015 and a year earlier was suspected of killing cubs belonging to famed bear 130.

In 2014, Split Lip and The Boss also forced the temporary closure of Vermilion Lakes Road during breeding season. Both bears were on the road, potentially causing a dangerous situation if they got into a fight over a female bear.

While he doesn’t have the same reputation as the other two, bear 126 is the other big male bear in the area, spending his time further west in the the national park and beyond.

“These are the three main grizzly bears who use the Bow Valley in Banff National Park that we are aware of,” said Rafla.

For now, bear 122 is focused solely on finding food.

“He’s pretty much the only bear that’s been out since early spring, although we’re starting to see some others, but his main directive is seeing what calories he can find,” said Rafla.

“There’s still lots of snow on the ground and there’s not really any green-up yet, but he is driven by food. He’s got his nose to the ground and will travel where the food is.”

While his movements vary throughout his 2,500-square-kilometre home range in Banff, Yoho and Kootenay national parks throughout the season, the railway line is a major travel route for No. 122 in early spring.

It’s a dangerous place for grizzly bears to seek food, but bear No. 122 looks for grain spilled from trains in spring, and he’s typically back looking for grain in fall when natural foods like buffaloberries are long gone.

He miraculously survived a train strike in 2010 near Vermilion Lakes.

So far this year, Rafla said bear No. 122 has been seen periodically in the valley bottom between Sunshine interchange and Lake Louise.

“He’s probably taking advantage of what may be adjacent to the tracks in terms of grain that’s fallen over the winter,” said Rafla.

“He also looks for other wildlife that have died over a long winter or perhaps scavenged from cougar or wolf kills found in the valley bottom.”

Bear 122 is typically the first bear out of the den each year – his Feb. 28 appearance this year was his earliest in a decade.

While bears tend to slow down in the winter, they are not true hibernators. They go into a deep sleep during the winter months, known as torpor.

Now that he’s out, bear 122 gets first choice of some of the better feeding areas.

“Bears are still persisting on all the body fat that they’ve accumulated from last summer and fall when they actually put on most of their weight,” said Rafla.

“They lost a significant amount of it over winter, so their noses will be out for food to get the appropriate nutrition for having not eaten for months.”

Bears will head into breeding season late May through June, and sometimes into early July.

Big male bears may attempt to kill a female’s cubs to bring her back into season.

“Males will be seeking out females without cubs, and females with cubs will obviously be doing their best to avoid males,” said Rafla.

By mid-July and August through to the fall, bears will voraciously eat a diet of natural foods such as forbs, roots and fruit-like calorie-rich buffaloberries to put on as much weight as they can.

“Prior to that, they are eating and they’re getting nutrition, but they’re not putting on much weight,” said Rafla.

“It’s later summer and fall where they really put on the weight needed to survive the winter.”

That weight could make the difference for some heading into the den, particularly determining whether female bears get pregnant or not.

“If they have a certain amount of fat, the egg will be inseminated, with a delayed implantation later in the fall,” said Rafla.

While it may seem simplistic, Ralfa said bears have key goals to survive.

“There are needs that they have in that struggle of existence,” said Ralfa, noting that points to the importance of respecting wildlife.

“We need to respect the needs of wildlife and give them space.”

As more bears begin to emerge from their dens, Parks Canada reminds people of the importance of staying safe by carrying bear spray and knowing how to use it, keeping pets on leash at all times, making lots of noise and properly storing food and garbage.

“Remember if you do a see a bear, the minimum distance you should be from that bear is 100 metres, preferably greater,” said Rafla.

“If you run into a bear while you’re on your walk or what not, turn around and give it the space and distance and respect it needs to go about its business.”

Parks Canada asks residents to report any bear or other carnivore sightings by calling 403-762-1470.

“People reporting helps us to maintain coexistence with wildlife,” said Rafla. “If we’re not aware of wildlife persisting in these human use areas early on, they can become more problematic later.”