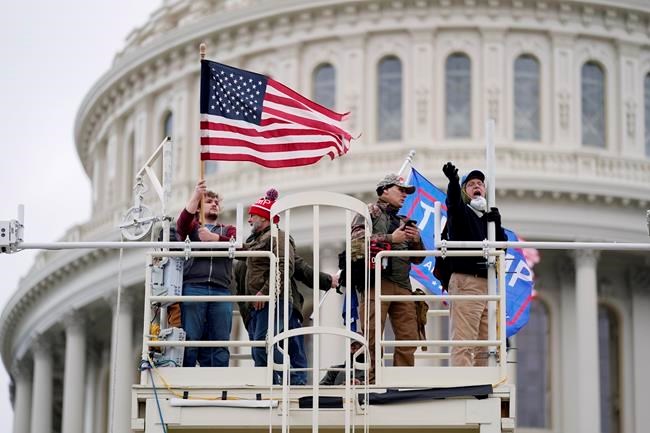 WASHINGTON, D.C. — Aftershocks shuddered through America's political and cultural bedrock again Friday as shaken lawmakers forged ahead with plans to make Donald Trump the first U.S. president to be impeached a second time.

The ongoing implosion of the Trump presidency, less than two weeks from expiring of its own accord, has been steadily accelerating over the course of the 48 hours since Wednesday's shocking siege of Capitol Hill.

The latest indignity came late Friday when Twitter, the social media platform that built his presidency and which he used daily to mobilize supporters, incense critics and rile up his 88 million followers, finally cut him off for good.

"After close review of recent tweets — specifically how they are being received and interpreted on and off Twitter — we have permanently suspended the account due to the risk of further incitement of violence," the company said in a statement.

Even Prime Minister Justin Trudeau, who over the course of the last four years has studiously avoided calling out the president by name, stopped pulling his punches.

"What we witnessed was an assault on democracy by violent rioters, incited by the current president and other politicians," Trudeau said in a prepared statement during a news conference outside his Rideau Cottage residence.

"As shocking, deeply disturbing, and frankly saddening as that event remains — we have also seen this week that democracy is resilient in America, our closest ally and neighbour.

"Violence has no place in our societies, and extremists will not succeed in overruling the will of the people."

Trump's tenure as commander-in-chief hit its lowest point to date Wednesday when waves of angry supporters, fuelled by his persistent but fictional claims of a stolen election and exhortations to fight back, stormed up the steps of the Capitol.

More than 24 hours later, Trump — seemingly chastened by the blast wave of outrage that ensued, including from his own staff and cabinet — acknowledged his defeat and promised a peaceful transition, infuriating some of his most fervent backers.

In online forums, users who typically preach loyalty to Trump abruptly changed their tune, calling the president's statement "the final betrayal" and a "punch in the gut."

Canada is not immune to the destabilizing forces that have brought the United States to the brink, Trudeau said as he urged Canadians to keep vigilant against the ever-present perils that might seek to undermine it.

Political leaders, he said, must always represent all of their constituents regardless of partisan stripe, and resist the temptation to engage in divisive, explosive rhetoric.

"We have a responsibility as Canadians to continue to lead with respect, to engage substantially with different points of view and to never resort to violence as a way of impacting public discourse," Trudeau said.

The prime minister went too far, said Colin Robertson, a former Canadian diplomat with extensive experience in U.S. political circles. Republicans still have plenty of political power, even without control of the White House or the legislative branch.

"I don’t see how the latest remarks win us any points with the Biden team, and it is only going to confirm the Trumpists’ view that he's 'two-faced' and can't resist virtue-signalling."

But after the storming of the Capitol, what little respect Trump retained is now gone, said Bessma Momani, an international affairs expert at the University of Waterloo.

"I doubt the president could enact any punitive actions against Canada in these remaining 12 days."

America's vaporous political atmosphere has some in the U.S. worried that a late-day impeachment proceeding risks rekindling the country's fever-pitch tensions — particularly with a presidential inauguration 12 days away.

Speaker Nancy Pelosi feels differently: "This unhinged president could not be more dangerous," she reportedly told Democrats on a conference call Friday.

Democratic leaders have been urging Vice-President Mike Pence to invoke a constitutional amendment that gives him and the federal cabinet the power to remove a president. Pelosi has promised impeachment proceedings if that doesn't happen.

"From a political perspective, clearly, Trump went way too far," said Eric Miller, a Canada-U.S. expert and president of the Rideau Potomac Strategy Group in Washington.

"(But) from an institutional perspective, in a constitutional republic, if one does not respect the basics of laws and the constitution and due process, then everybody is in deeper trouble."

The decision of whether or not to launch impeachment proceedings, which some reports indicate could begin as soon as Monday, is for Congress to make on its own, said president-elect Joe Biden.

Biden refused to say whether he would support such an effort. He did say, however, that he hopes Congress is ready to hit the ground running once he's inaugurated on Jan. 20.

"He is not fit to serve — he is one of the most incompetent presidents in the history of the United States of America," Biden said.

"I think it's important that we get on with business. Getting him out of office — the quickest way that will happen is us being sworn in on the 20th."

On that day, the Capitol will again serve as a backdrop, just two weeks after the very location where Biden and incoming vice-president Kamala Harris will be sworn in was overrun by Trump supporters. Trump himself said Friday he won't be there.

Biden said he's not worried about security, since that's a matter for the Secret Service, not the Capitol. Doubtless, between political tensions and the COVID-19 pandemic, it's likely to be a much more nerve-racking affair than inaugurations past.

"I hope the inauguration is small, socially distant and only seen on TV," Miller said. "We're used to doing the big church wedding, but now it looks more appropriate to elope."

This report by The Canadian Press was first published Jan. 8, 2021.

— With files from Mike Blanchfield in Ottawa