As NHL deals with COVID-19 in U.S., Canadian-based NHLers thankful for North Division

"It's been a lot easier with the rules and the restrictions we have here in Canada to stay healthy," Calgary Flames goalie Jacob Markstrom said.
Feb 7, 2021 9:15 AM By: Canadian Press 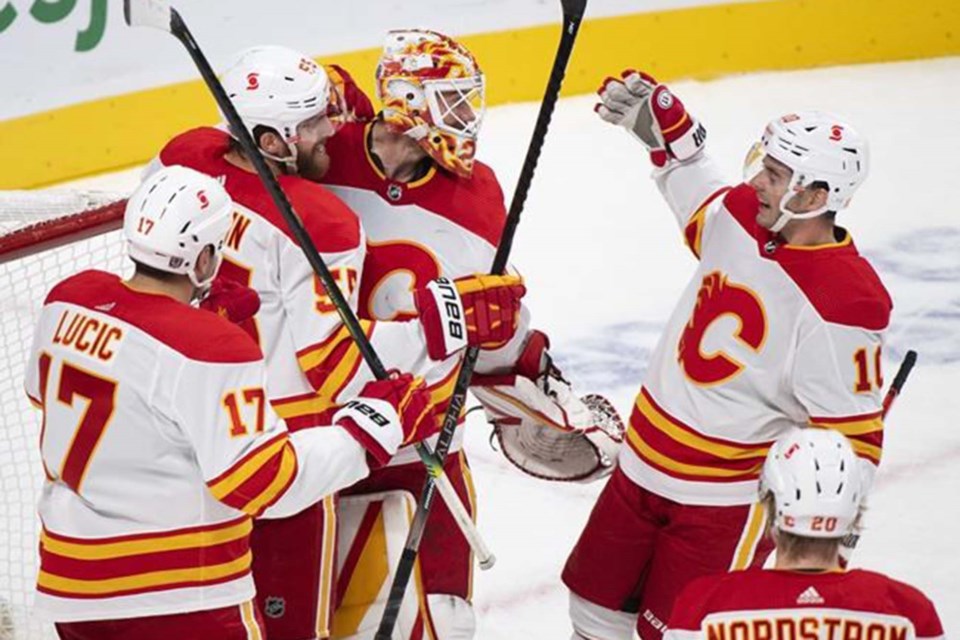 Calgary Flames goaltender Jacob Markstrom celebrates with teammates after defeating the Montreal Canadiens in an NHL hockey game in Montreal on Jan. 30, 2021.THE CANADIAN PRESS/Graham Hughes

The Calgary Flames goalie goes to the rink and gets tested before hitting the ice for practice. When that's done, he heads home to make food, watch TV and go to bed.

That's pretty much what life is currently like for players across the North Division – a one-time-only circuit featuring all seven Canadian franchises borne out of necessity due to pandemic travel restrictions.

"It's been a lot easier with the rules and the restrictions we have here in Canada to stay healthy," Markstrom said.

The same, however, can't be said south of the border, where coronavirus infection rates are much higher and government-mandated public heath measures often more lax.

At one point this week, five NHL teams in the U.S. were sitting idle because of the league's COVID-19 protocols.

The New Jersey Devils won't play again until at least Tuesday, the Buffalo Sabres and Minnesota Wild are off until Thursday, while the Colorado Avalanche won't see action again until Feb. 14. The Vegas Golden Knights had four games postponed before returning to the ice Friday.

Players and coaches in Canada are thankful the story is much different here, but are also aware it's no time to let their guard down.

"We've still got to be cautious and take the precautions seriously, and make sure we're not doing anything stupid to put ourselves at risk," Edmonton Oilers forward Ryan Nugent-Hopkins said. "Luckily our division's been good with it. Let's just hope that can continue."

All told, 26 games south of the border have been postponed since the season opened Jan. 13, impacting 16 of the league's 24 U.S.-based teams. There are currently 41 players deemed "unavailable" on the league's protocol list – being included doesn't necessarily mean there's been a positive test – but only one is from a Canadian team, Winnipeg Jets centre Pierre-Luc Dubois, who's in the final stages of his quarantine after a trade with the Columbus Blue Jackets.

Roughly 100 players have appeared on the COVID-19 list just over three weeks into the season. But NHL commissioner Gary Bettman said in a statement this week fewer than half had confirmed positive tests.

"We've been fortunate in the (North) Division," Toronto Maple Leafs winger Zach Hyman said. "We have to stay diligent."

Teams are only allowed at the hotel, arena and airport when on the road during a 56-game season that features division-only play, but the situation on the ground is completely different in Canada compared to the many parts of the U.S.

"It's a lot easier for us to have a clean sheet," Flames defenceman Christopher Tanev said. "We can't really do anything. It's a pretty full lockdown."

Leafs head coach Sheldon Keefe said the issues with some American teams – on top of games being postponed, practice facilities are also shuttered – is a reminder the virus remains a threat across the board.

"We've got to be responsible despite the fact here in Canada we've done a good job of avoiding (similar) situations," he said. "I've got a lot of friends inside the league and outside the league in the U.S.

"They're trying to manage it the best they can."

"Our government's done a really good job trying to limit (the virus) and eliminate exposures," he said. "Other than going to the rink and going home, there's really nowhere else to go right now. It makes it pretty easy as a hockey player to not put yourself at risk.

"We have a really good chance here in Canada to keep playing."

As a husband and father of three, Oilers forward Kyle Turris said his mind is at more at ease playing in the North Division.

"You still have the concern of the virus," he said. "But it just seems like in the U.S. (the virus) spreads more and at a faster rate, and it's a little less cautious.

"It's something you consider and think about, at times, having a family."

Byron, meanwhile, added he has sympathy for players in the U.S.

"Where some of those teams are, the cases are really bad," he said. "Every time they leave their house they're unfortunately in a position to be exposed. We're pretty lucky to be here in Canada."

Dr. Isaac Bogoch, an infectious disease expert at the University of Toronto who has advised the NHLPA during the pandemic, said higher case counts in the U.S. means players are slightly more at risk to get the virus, even when following league protocols.

"That doesn't mean that Canada's zero risk – everyone has to be careful. It's just a higher risk where there's a higher community burden."

Apart from the 213 pages of health measure unveiled before the start of the season, the NHL revised some of its rules this week.

The glass behind the benches has been removed for better air flow, players and coaches aren't allowed inside arenas until one hour 45 minutes before puck drop unless they're receiving treatment for injuries, and all team meetings must be virtual.

"You have to make a few sacrifices."

Jets head coach Paul Maurice said having a couple of players from his team on the protocol list last month was a wake-up call.

"It keeps everybody on their toes," he said. "We're not perfect, but we try to be."

Byron said he expects further measures from the league in the coming weeks and months.

Vancouver Canucks defenceman Nate Schmidt, whose former teammates in Vegas were recently sidelined, said it's difficult for players to ramp back up after extended time off.

"It's a bummer," he said. "You're playing and you're in that routine and all of the sudden, you're out, you're done. It doesn't matter if you had (the virus) or not.

"It's just a lot of uncertainty."

Tanev said the challenge for North Division clubs moving forward will come when some restrictions are inevitably relaxed in different jurisdictions.

Canadiens head coach Claude Julien said that while the virus will continue hanging over the schedule — even north of the border – his team and its six opponents are in a good spot.

"COVID's everywhere right now," said the 60-year-old. "We've been fortunate enough to stay away from it.

"Every day we keep crossing our fingers that it keeps going that way."

– With files from Gemma Karstens-Smith in Vancouver.

This report by The Canadian Press was first published Feb. 5, 2021.