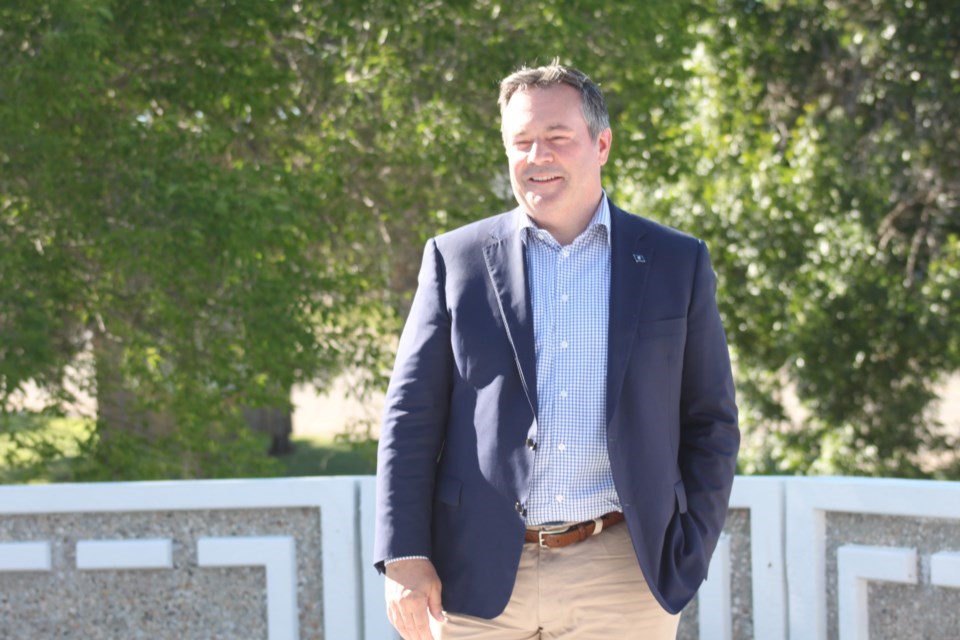 Premier Jason Kenney stopped in St. Paul last summer, as part of a tour of the Lakeland area. File photo

LAKELAND - With the UCP government now two years into its mandate, Premier Jason Kenney is promising municipal politicians that 2021 will set the stage for a time of recovery for Alberta’s economy while dealing with the fiscal hangover of the last several years.

"We are set for a turnaround year in Alberta and God knows we deserve it. We need one after what's happened to this province for the last four or five years. So much of that growth is going to happen in your communities," Kenney said during his address to the spring convention of the Rural Alberta Municipalities Association March 17.

Kenney said the government has launched a bold recovery plan to build and diversify with an eye on creating tens of thousands of news jobs in the province and rural Alberta stands to benefit from the Province's investment in infrastructure and economic renewal.

"Sometimes I've heard a view out there that Alberta's government has under-invested in or not responded to the needs or priorities of rural Alberta, and I believe the opposite is true. This government has a strong and outspoken rural caucus that is represented in our cabinet and in the government caucus and they speak every single day for the need for critical investments in rural services and infrastructure, recognizing that often things are more expensive to deliver in rural areas, and remote areas in particular."

Kenney delivered what could be described as an impassioned speech to his rural counterparts. He spend time highlighting his government’s multi-billion investment in Alberta’s economic recovery, much of which lies in capital spending to build and modernize infrastructure, with rural Alberta benefitting disproportionately due to the fact most of the government infrastructure is located outside of the major urban centres.

"The wealth generated in Alberta, through our natural resources for example, comes from rural regions of the province. We need vital rural communities," he said. "I dream of a province where rural communities don't struggle with maintaining population but where their population continues to grow, where young families settle in rural communities because they can have a bright future."

During the last year, he said $10 billion was spent cross the province on infrastructure investment – including the $1.3 billion for the Keystone XL pipeline construction in eastern Alberta. Kenney said it helped to create thousands of jobs and was a small economic boon in certain communities like Oyen. The Premier indicated he wasn’t ready to give up the fight and continues to lobby south of the border to bring the project back on stream after President Joe Biden vetoed the pipeline within days of taking office.

“There continues to be strong support across the United States for that project. We’ve not given up,” he said, adding the Province continues to work with TC Energy to see if there is a way forward and going so far as to say Alberta will defend its interests in court if necessary.

"So that project’s not done. That investment was a critical part of economic renewal and job creation this past year.”

This year’s budget laid out a plan for $21 billion of capital spending by Alberta’s government for the next three years with Kenney referencing some of the strategic projects he believes play a significant role on the road to recovery. On the list is $120 million to twin the David Thompson Highway between Sylvan Lake and Rocky Mountain House, the twinning of Hwy. 3 between Taber and Burdett, which he described as critically important for agriculture and as a commodity corridor in southern Alberta, and $50 million to widen Hwy. 40. In all, Kenney said $1.4 billion of Alberta’s Transportation budget is earmarked for rural areas as the province has accelerated its capital maintenance and repair budget.

With $137 million allocated to the Alberta Wastewater partnership for 54 projects, $13 million for the First Nation water tie-in program, $50 million for the Strategic Transportation Infrastructure Program - a cost shared funding stream with municipalities, and an $815 million package with irrigation authorities and federal/provincial support to undertake what Kenney says is  the largest renewal in irrigation infrastructure in this province since the early 1960s, the Premier delivered a strong sales pitch to the province’s rural municipalities. He described the irrigation investment as a game changer for agriculture in southern Alberta that will increase arable land and yields as the Province continues to work with investors to process those crops with Lethbridge increasingly becoming a processing hub for agrifoods.

Another $60 million over three years has been earmarked to fight the pine beetle to protect Alberta forests, flood mitigation is getting $45 million and $43 million is being invested to support fisheries and recreation in rural Alberta.

The Premier said the province faced a collapse of one-quarter of the government's revenue through the last year and the projected $18 billion deficit this year means the tough times are not over. Even so, he said, his government is making a "deliberate decision" to invest in rural economic development and public services.

Taking aim at the media, Kenney said he believes this is a time for growing optimism.

“The media doesn’t tend to report on good news very much. They certainly tend to put the emphasis on bad news and there’s been no shortage of bad news over the past tough pandemic year, but I think about some remarkable things that are happening.”

He said Alberta’s population grew faster than any other province in the country in 2020 which he said it is amazing in a province with the worst hit economy that people continue to see Alberta as a place of “hope and opportunity.”

He said there are signs of "real growth" returning to the economy including an agricultural sector that is seeing some strong commodity prices and a forestry industry that performed well through the last year. An increase in oil prices also lends itself to optimism for the months ahead, he said.

An area of concern for several rural municipalities continues to be the estimated $250 million in unpaid industry property taxes by the energy sector. On that front, Kenney appeared to be taking the position that it was time to pay up.

“Last year, when they were looking at negative prices for a while, I think that was understandable but as these prices come back, we have to insist that those companies honour their tax liabilities so you can provide the services that you need to – including the roads and everything else you do to make that industry work in rural Alberta.”

In summing up, Kenney asked rural politicians to continue to work together as Team Alberta to get this economy firing back on all cylinders.

“Spring is coming, strong commodity prices, a government policy that is open for business and it is starting to yield real results in terms of new investment in this province,” he said, while also warning, “There are some challenging months ahead of us. We will still have to deal with the fiscal hangover from all of the challenges of the recent past.”

About the Author: Clare Gauvreau

Clare Gauvreau has worked for the St. Paul Journal for more than 20 years as a journalist, editor and publisher. In her role today as newspaper publisher she continues to contribute news and feature articles on a regular basis.
Read more