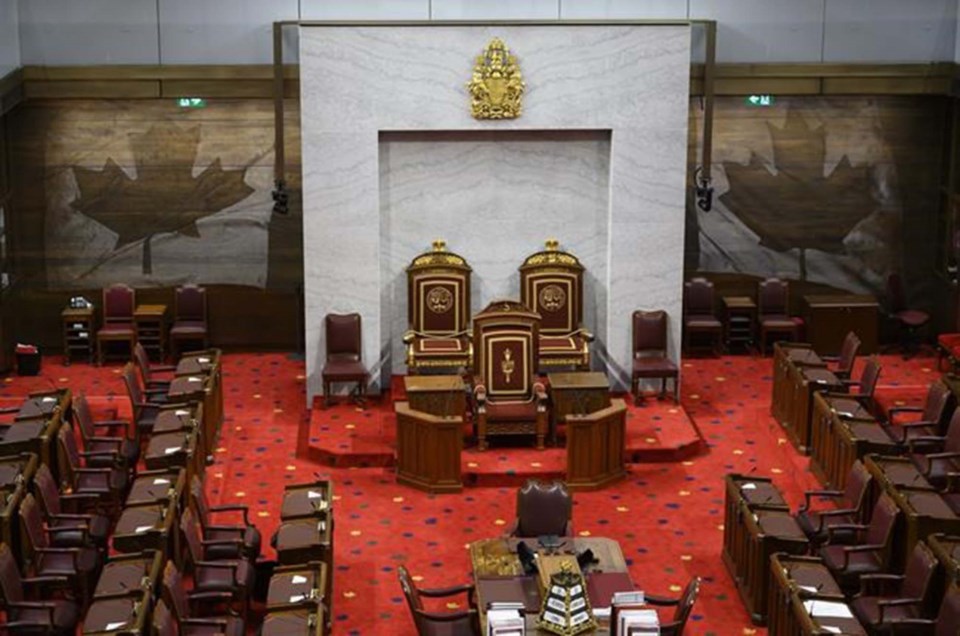 The Senate of Canada building and Senate Chamber are pictured in Ottawa on Monday, Feb. 18, 2019. Senators voted Tuesday to give the federal government 18 months to expand access to medical assistance in dying to people suffering solely from mental illnesses. THE CANADIAN PRESS/Sean Kilpatrick

OTTAWA — Senators have voted to give the federal government 18 months to expand access to medical assistance in dying to people suffering solely from mental illnesses.

They voted 57-21 Tuesday to amend Bill C-7, which proposes an explicit, blanket prohibition on assisted dying in cases involving only mental illness but would expand access to other intolerably suffering people who are not near the natural end of their lives.

The amendment puts an 18-month time limit on the mental illness exclusion, intended to give the federal government, along with provinces, territories and medical associations, time to come up with appropriate guidelines and safeguards.

Until the exclusion is lifted, senators also agreed to another amendment to clarify that it will not apply to people suffering from neurocognitive disorders such as Alzheimer's disease, dementia, Parkinson's disease and Huntington's disease.

Justice Minister David Lametti has said it was not the government's intention to exclude such disorders. The amendment to make that crystal clear was approved by senators on a voice vote.

The sunset clause on the mental illness exclusion was proposed by Sen. Stan Kutcher, a psychiatrist who now sits in the Independent Senators Group.

He argued that the exclusion is unconstitutional, violating the right to equal treatment under the law, regardless of physical and mental disability, as guaranteed in the Charter of Rights and Freedoms.

Moreover, Kutcher argued that it stigmatizes people with mental illnesses, suggesting that they don't have the mental capacity to decide when their suffering has become intolerable and that their suffering is somehow less than that caused by physical illnesses.

"Intolerable suffering is a subjective, personal experience. It cannot be negated or delegitimized by anyone else's valuation of that suffering," Kutcher told the Senate.

"Persons who have intolerable suffering from a mental disorder do not have a second-class type of suffering. Their suffering must be taken just as seriously as we take the suffering of those who request MAID (medical assistance in dying) for any other medical condition."

The Canadian Psychiatric Association has denounced the exclusion as discriminatory, stigmatizing and unconstitutional.

Six senators, including the government's representative in the Senate, Sen. Marc Gold, and the bill's sponsor, Sen. Chantal Petitclerc of the Independent Senators Group, abstained on Kutcher's amendment.

Lametti has argued that the exclusion is necessary because there is no consensus among psychiatrists on whether people suffering solely from mental illnesses should ever be allowed access to assisted dying.

That's because the trajectory of mental illnesses is often unpredictable, making it difficult to determine if a patient's condition might improve, he has said. Moreover, Lametti has pointed out that a wish to die is often a symptom of a mental illness.

But Kutcher argued that the same complexities can apply in assessing patients with physical conditions. He noted that the bill would allow assisted dying for people suffering from a combination of mental and physical disorders.

An overwhelming majority of senators supported the amendment, with many saying they'd prefer to see the mental illness exclusion repealed altogether but accepted Kutcher's sunset clause as a reasonable compromise.

However, Conservative Sen. Denise Batters argued strenuously against the amendment.

"The term sunset clause is just a euphemism for the sunsetting of vulnerable people's lives," she told the Senate.

"It sounds so innocuous, a sunset clause," Batters added.

"But, honourable senators, don't be fooled. This means that at least some Canadians will have their lives ended before they can access the treatments or options that could very well relieve their suffering and give them years to live."

Senators rejected Monday a third proposed amendment aimed at forcing the creation of a parliamentary committee within three months to review access to assisted dying for people with neurodegenerative diseases.

Conservative Sen. Pierre-Hugues Boisvenu, who proposed the amendment, wanted the committee, which was to report back within one year, to look particularly at the issue of advanced directives for such people.

That amendment was defeated by a vote of 47-28, with six abstentions.

Senators are to resume debate Wednesday, with more amendments to be proposed.

This report by The Canadian Press was first published Feb. 9, 2021.