CANMORE – If success is measured by the interest of the community, then Sheepdog Brewing drawing international and local visitors alike speaks to the new business’s efforts on its opening weekend.
0
Jun 13, 2019 12:00 AM By: Aryn Toombs 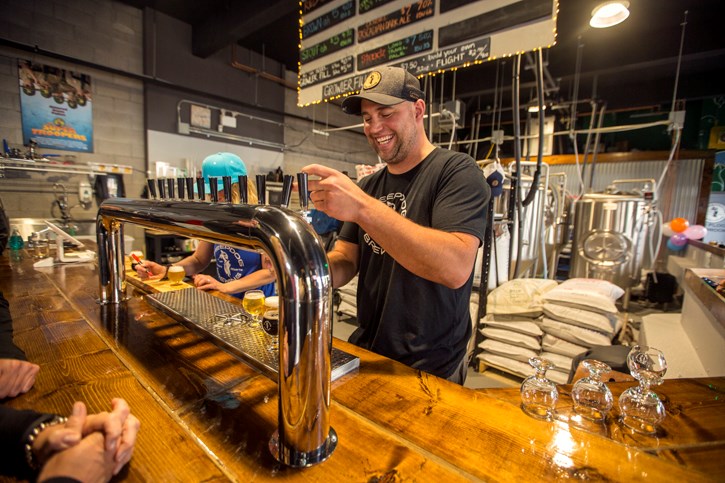 Josh Forster pours pints during the grand opening of Sheepdog Brewing in Canmore on Friday (June 7).

CANMORE – If success is measured by the interest of the community, then Sheepdog Brewing drawing international and local visitors alike speaks to the new business’s efforts on its opening weekend.

After a long two year wait for the brewery to officially open – long anticipated by Bow Valley beer aficionados – is finally off to a smashing smart and co-owners Josh Forster, David Gauvreau and Allen Russel served over 1,500 pints – or a pint every 20 seconds – over the weekend.

“I think one thing that we shocked people with when they came in the door was having seven beers on tap,” said Forster.

“I think that was a big selling feature with ‘holy moly, they delayed their opening so they could set themselves apart at the beginning.’”

Selling pints in the $5 to $7 range, Sheepdog sets itself apart from other local bars and restaurants both in lower price points and also in the range of beers being offered.On tap is the Steed Long Travel Pale Ale, a single wheat, barley and hop smash, a summer german style kolsch, a Cascadian dark ale with Cascadian hops and a selection of brown-ish, red-ish and stout-ishs.The pale ale ended up being the most popular beer, with the schedule to brew additional kegs pushed up by several weeks by the strong demand.The Steedz Long Travel Pale Ale came about after the local enduro bike group approached Sheepdog for sponsorship.“They were asking us to help sponsor them, but we didn’t really know how to do it, so we asked if we could make a beer,” said Gauvreau.

Other favourites over the weekend were the Cascadian dark ale, which combines the darkness of an ale with the light flavour of an IPA and the kolsch.

“Our other core beers were well received by the community,” said Forster.The -ish beers were also an interesting addition for beer aficionados, as these were from the first and second brewings done with Sheepdog’s new brewing system.The flavours, while still in line with what drinkers of browns, reds and stouts expect, also represent the journey the three founders are taking to perfect their lineup.“We wanted to put some humanity behind them and say ‘hey, they’re not perfect but they still taste really good.’ But they’re not up to the style of 5, 5.5 per cent [alcohol by volume] that those beers should be,” said Forster. “I’m drinking one of the brown-ishs right now.”

The journey to creating the brewery began two years ago in August of 2017 when Forster and Russel, both avid home brewers, began seriously talking about opening a brewery.

Gauvreau came on board several months later, and the trio began exploring the idea seriously by visiting the Edmonton beer expo.

The founders said they weren’t taken too seriously at the time, not having a firm location or the tanks to brew with, but when they returned the next year with both, the community was open and helpful.

The friendliness of the brewing industry also extends to the other breweries throughout the valley, with staff from Canmore Brewing, Grizzly Paw and Banff Ave Brewing Co. attending the grand opening last Friday.

“The industry has been great here in Canmore. It’s super collaborative,” said Forster.

Sheepdog is the latest in the slow trickle of brewing and distillery businesses opening in the valley.

According to Statistics Canada, Alberta had 58 breweries open as of December 2018.

For more information and current hours, see their location at Unit 112, 105 Bow Meadows Crescent and their website at www.sheepdogbrewing.com.