Son takes up the mantel of local business 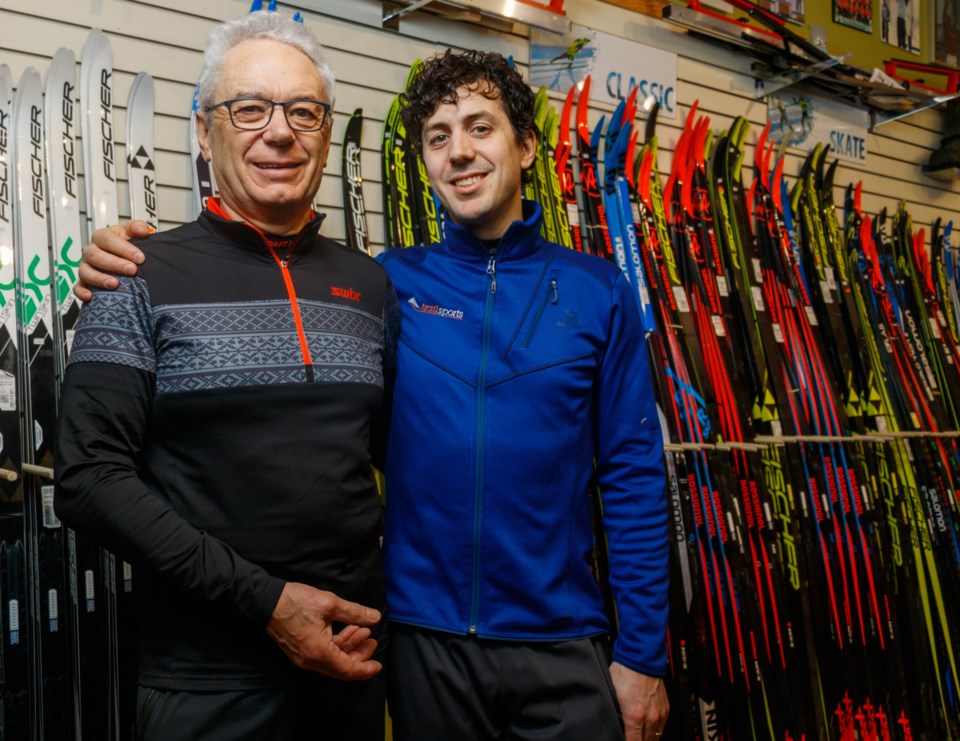 Founder of Trail Sports John Gallagher, left, and his son John pose for a photo at the shop on Wednesday (Jan. 29). CHELSEA KEMP RMO PHOTO

CANMORE – Embracing his retirement, an icon of the local business community is passing the mantel of Trail Sports to his son.

John Gallagher launched Trail Sports in 1991 and said at the time business was slow as the Canmore Nordic Centre was in its infancy, on the cusp of exploding in popularity.

“We started in the summer,” John said.

“The summer at the Nordic Centre was not really busy back in those days.”

Before launching Trail Sports, John worked as a cross-country ski instructor and became interested in testing the market in the Bow Valley, he said. His curiosity led him to start a business that has thrived in the community for almost three decades.

The Gallagher family lived in Calgary in the 1980s and watched as Canmore grew in popularity, largely in part to the 1988 Winter Olympics.

After the Olympics, John said he felt it would be the perfect opportunity to launch a shop that specialized in outdoor activity rentals paired with lessons.

“We thought there would be demand,” John explained.

“I worked for a couple of years without getting paid, and it gradually built up.”

John said he has stayed enthusiastic about Trail Sports over the years because he gets to live in a beautiful community while sharing a sport he loves with others.

“It’s something I love doing – I get paid to do something that I would probably do anyway.”

When he first opened his shop at the base of the Nordic Centre, he was unsure what the future would hold.

“I expected that after five years we would be gone,” John said with a laugh.

Trail Sports was able to grow and thrive, John said because they were able to supply visitors to the Nordic Centre with rentals they craved paired with guides to provide lessons to those interested.

“We filled that niche,” John said.

“Once word got out it [Trail Sports] just grew.”

Teaching new skiers has been John’s favourite aspect of Trail Sports, he said, because each day offers a new and different experience paired with a chance to share his passion.

“The lessons are always a challenge because you think about what you can tell people and how you can help them,” John said.

The winter is the busiest time of year, John said, explaining that the shop can see more than 200 people come through their doors during the more hectic days. They have been working to expand the business in the summer and have seen a growing interest in mountain bike rentals and lessons.

The legacy he launched has grown and cemented itself in the Bow Valley area, and the torch is now being passed to his son Patrick.

Patrick began working at the shop as a child around the year 2000 when he was in Grade 10.

“I used to work the evening shifts and then after high school, I worked there for a year,” Patrick said.

“It’s a lot of fun being able to build enthusiasm and grow the sport a little bit,” Patrick said.

“Everything we do gets people out.”

Patrick officially took over the reins of Trails Sports after John retired on Dec. 31.

The father-son team worked together for about two months before John’s departure to ensure the passing of the mantel was a smooth transition.

“It was super busy,” Patrick said.

“I spent a lot of time getting familiar with the business, with the financial side of the business – it was a lot of learning on the job.”

Patrick was living in Houston working in the oil and gas industry for about three years before returning to the Bow Valley.

The call of the mountains proved strong through, and Patrick moved back to Canmore so he could take over the family business.

“It’s an opportunity that I couldn’t miss – living back here in the mountains is hard to beat,” Patrick said.

“The business is really hard to beat.”

Now that he is retired his only plan is to ski as much as he can, John said with a laugh, a simple pleasure that was hard to pursue when he ran Trail Sports.