CANMORE – It has been more than seven years since Canmore council approved a comprehensive housing action plan and elected officials are looking at reassessing the strategic planning document in the near future.
Sep 27, 2018 12:00 AM By: Tanya Foubert 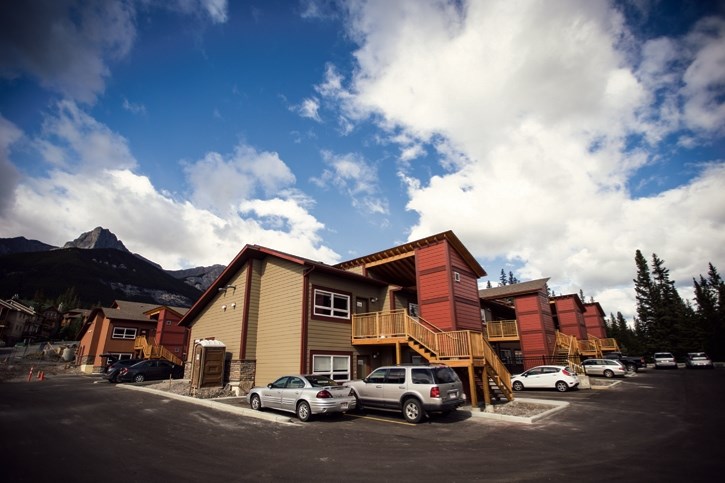 McArthur Place, pictured here, is one of several affordable housing projects brought online over the past couple years through Canmore Community Housing Corporation.

CANMORE – It has been more than seven years since Canmore council approved a comprehensive housing action plan and elected officials are looking at reassessing the strategic planning document in the near future.

That assessment also includes looking at Canmore Community Housing Corporation (CCHC) and helping that organization finalize its 2019 business plan and next three-year strategic plan with respect to delivering on its mandate.

The need to review the 2011 Comprehensive Housing Action Plan and provide future direction for CCHC came up at the municipally-run corporation’s shareholders meeting with Town council on Sept. 18.

Mayor John Borrowman stressed it is important for him that CCHC continues to work toward adding affordable housing inventory on an ongoing basis.

General manager of municipal infrastructure Michael Fark said with a housing needs assessment being finalized by Bow Valley Regional Housing, and a number of new projects reaching occupancy or breaking ground in the community, now is the right time for council to reassess.

“Given all the changes that have occurred, it is a good moment to update the Comprehensive Housing Action Plan,” said Fark, adding updating that document would allow the municipality to re-survey the landscape and plan for the future.

Fark added that, taking the opportunity to look at the housing action plan will allow the impact of housing projects that have come online in the past several years to be incorporated into future plans.

Councillor Joanna McCallum, who sits as chair of Bow Valley Regional Housing, said updating that plan is imperative and having a housing action plan actually leads to successful projects in the ground that meet the community’s needs.

“I think it behooves us to realize the reason why we have gone through the planning we have in terms of McArthur Place and Hawk’s Bend was because there was a good plan in place,” said McCallum, adding that includes considering the possibility of an athletes’ village.

“What I am wondering is, with the possibility of housing coming as a legacy through the Olympic bid process, whether the board will be engaging in any kind of focused dissection of those plans to ensure they are prudent and to be able to endorse those plans when Canmore council makes a decision.”

CCHC executive director Dougal Forteath told council his board of directors is looking to them as shareholders for direction into the future.

CCHC has three core objectives, he said; to increase the supply of affordable housing, to deliver housing programs that meet the needs of Canmore’s workforce and to have a strong governing board of directors.

It has been a busy year for housing objectives for the Town of Canmore, with CCHC’s 49-unit Hawk’s Bend home ownership project nearing completion, and the 49-unit McArthur Place rental project achieving occupancy.

Both projects fall under CCHC’s perpetually affordable housing (PAH) program and put additional units into its inventory. Currently, CCHC has
108 rental units in its portfolio and rental rates are designed to be a minimum of 10 per cent below rates of equivalent market units. CCHC also has 44 units in its home ownership portfolio and, once Hawk’s Bend is completed, that doubles in size.

Forteath said all units at the new project, developed on lands that used to be home to the daycare and preschool, have been sold to residents of the community.

In addition to what CCHC has undertaken over the past couple years, council approved the municipality entering into a private-public partnership with Northview real estate investment trust to develop a 148-unit rental apartment building on Palliser Trail. Part of the deal was that 40 of those units would also be available through CCHC’s rental program in the community.

“In total, you have approved as council about 348 units of purpose-built rental housing to put on the market,” Forteath said. “I think combined, those are some wonderful accomplishments in the last three years in terms of delivering housing programs.“

As of August, both PAH programs continue to have waitlists. The home ownership list saw the greatest increase over the past year with the development of Hawk’s Bend. Forteath said it went from 18-22 on the list to 112 by the end of summer. Information sessions about the program are also popular in the community, with the anticipation more residents will apply and get on the list.

“The expectation and demand for future PAH home ownership seems to be high,” he said.

The two rental projects – the Hector and McArthur Place – have 75 and 73 households on their waitlists, respectively, with 49 of those shared between the two.

One of the challenges for CCHC to develop more inventory for its ownership program in particular, said Forteath, is the fact any financing it would need to fund a housing project would count against the municipality’s debt limits. That means CCHC competes with other priorities in the capital budget to obtain funding, even though the model used pays off the debt through the sale of units.

Canmore has put forward a successful motion at the Alberta Urban Municipalities Association conference in the past to lobby the province to change the rules around debt limits to exclude debentures taken out to fund housing in this manner from those calculations.

“It is very important for CCHC if the shareholders would like to see us get into more development,” Forteath said. “Otherwise, we find our short term borrowing competes with municipal projects and limited funds.”

CCHC board chair Dan Sparks also brought up the issue around secondary suites in the community and asked council to address it in the near future.

“I think the board would like to see the secondary suite issue expedited,” Sparks said. “In Town, that was a big topic pre-election and it has kind of gone into limbo since.”

Changes to the Land Use Bylaw with respect to secondary suites, which represents existing inventory in the community of housing, are expected mid-October.