Canmore Councillor Esmé Comfort put forward a successful motion on Tuesday (Feb. 2) to direct the mayor to write a letter to Premier Jason Kenney urging him to reinstate the 1976 coal policy rescinded by the UCP government last year.
Feb 2, 2021 6:00 PM By: Tanya Foubert 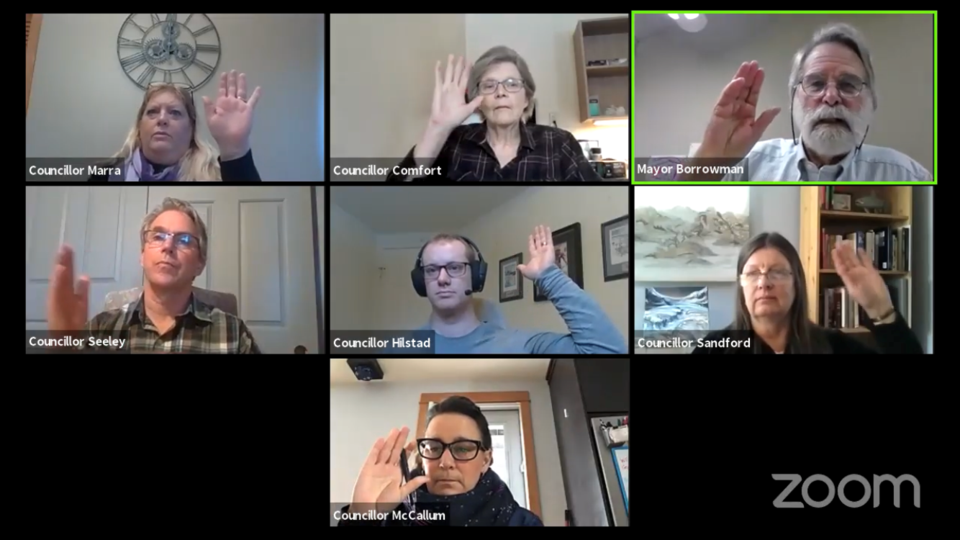 CANMORE – Canmore Mayor John Borrowman will write a letter to Premier Jason Kenney urging him and the UCP government to reinstate the 1976 Coal Development Policy that was rescinded last year.

The mayor was directed to write the letter through a unanimous motion of council put forward by Councillor Esmé Comfort on Tuesday (Feb. 2).

Comfort said she had already reached out to Banff-Kananaskis MLA Miranda Rosin to express her concerns as a private citizen and the reply she received "did not satisfy my concerns."

"This was done on a Friday before a long weekend in the middle of COVID," Comfort said. "It was done unilaterally and it is a policy that took years to craft and involved many stakeholders at the table to create an effective policy.

"To cancel it out-of-hand, summarily shows a great disrespect to the people of Alberta."

The May 15 announcement that the policy, which prohibited open-pit coal mining in category 2 lands along the eastern slopes of the Rocky Mountains, lauded the change as a modernization of the rules to provide flexibility and certainty for industry, while maintaining protections for sensitive lands.

The land categories in the policy set out where coal leases, exploration and development could and could not occur. The government labelled the protections as "outdated land use restrictions" and said by removing them, the coal industry would be subject to the same land use policies as other commodities.

The change opened up a large area – 420,000 hectares – that was previously protected from open-pit coal mining to the environmentally destructive resource extraction process.

While a number of leases with coal companies have been signed as a result, there has also been significant public backlash regarding the policy change.

Concerns include the lack of consultation prior to the announcement, with the environmental consequences open-pit coal mining on rivers and aquatic species, as well as concerns with this type of industrial activity in the headwaters of the Oldman River.

In mid-January, the province announced it would pause any future coal lease sales in former category 2 lands and 11 leases auctioned off in December would be cancelled. Minister of Energy Sonya Savage said at the time that even with the change to the policy, all projects would be subject to a comprehensive regulatory review prior to approval.

“Coal development remains an important part of the Western Canadian economy, especially in rural communities, but we are committed to demonstrating that it will only be developed responsibly under Alberta’s modern regulatory standards and processes," Savage said in a press release.

However, the move did not go far enough for those who have been critical of the change and are calling for the policy to be reinstated. Critics have questioned the ability and willingness of the Alberta Energy Regulator to ensure environmental factors are seriously considered in these types of applications.

High River council and Mayor Craig Snodgrass have also penned a letter to the premier asking for a stop-work-order on all coal exploration activity in the Rocky Mountains.

Mayor Borrowman said he believes by rescinding the coal policy, the provincial government has made a decision that will have a lasting negative effect on the eastern slopes.

"I have always felt the coal policy approved by the Lougheed government many years ago has had a really important long-term benefit to the province, and changes to a policy such as that really should be vetted through a comprehensive public engagement process," he said.

Councillors Vi Sandford, Joanna McCallum and Karen Marra all expressed support for the motion and gratitude for their colleague bringing it forward.

"I believe we need to stand in solidarity with our neighbouring municipalities that will be directly affected by the rescission of the 1976 Coal Development Policy," McCallum said.