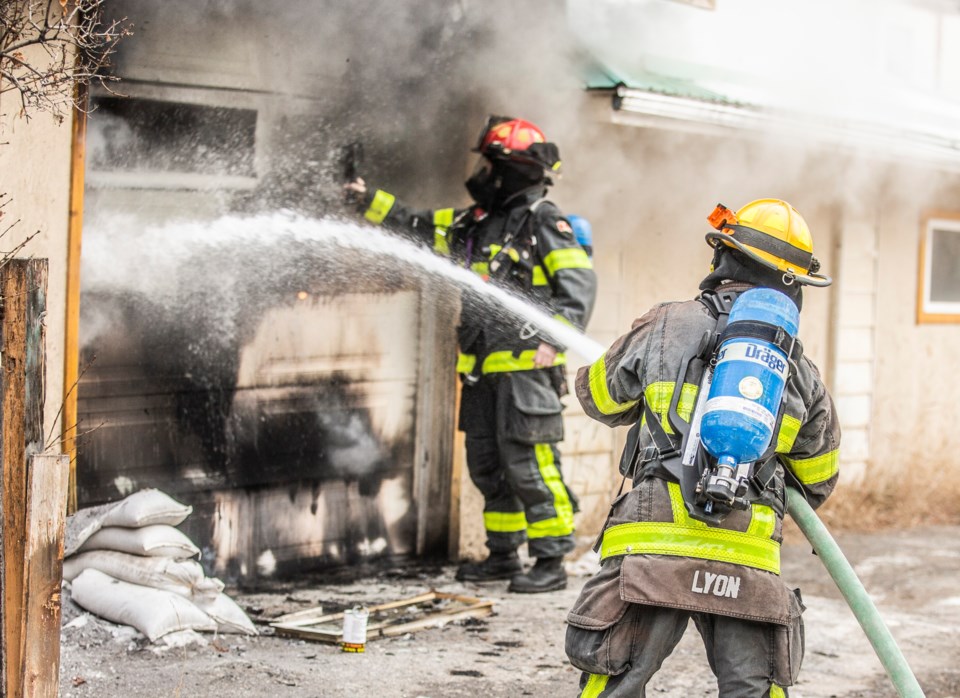 Canmore Fire Rescue responds to a fire in a garage located on Fourth Street in Canmore in December 2018. RMO FILE PHOTO

CANMORE – A trial peak staffing model for Canmore Fire Rescue this summer was successful in reducing the amount of time it takes for the department to deploy to emergencies according officials with the municipality.

For Canmore Fire Chief Walter Gahler, going from a base staffing level of two firefighters at the hall to four, helped increase the efficiency for response to emergency calls during part of June, the full months of July and August, and part of September, as part of a peak staffing trial approved by council in the 2019 operational budget.

While the local fire hall typically runs a two-person full-time crew, the fire truck requires four firefighters on board to get rolling for most emergency calls. When there are only two firefighters at the hall, the wait for the additional part-time staff to show up can be anywhere from a couple to minutes to 10 minutes, averaging at seven to eight minutes to be fully staffed – increasing the response time to 16 to 18 minutes.

However, during the summer trial with peak staffing, the rollout time was 90-seconds, resulting in a seven to eight minute response average.

"The thing I really took away was knowing our crews were leaving to all calls, not just medical calls but all calls within 90-seconds and you know that makes a difference in a lot of different ways," Gahler said.

"The most obvious is on an actual fire – our goal is to try keep the fire to the room of origin, is what we call it – so if a fire starts in a room, if you can keep it to the room it started in then survivability rates for people in the rest of the building is much higher, insurance claims are much lower and damage claims are much lower than that.

"What we find in the fire industry, once a fire has broken out of the room of origin, it's extremely difficult to contain, particularly with a limited work force."

While Canmore Fire Rescue has partners in mutual aid, with help from fire departments in Banff and MD of Bighorn, Gahler noted the additional help can be anywhere from 20 to 40 minutes away. When structure fires double in size by the minute, the goal is to respond as quickly as possible and keeping the fire to the original room.

During the summer trial for peak staffing during the day shift, the firefighters encountered approximately three fires where response times were on par with targets goals and the fires did not get a chance to expand from the room of origin.

"The level of service is much higher to the community – if you're in a motor vehicle accident, we'll be rolling in 90 second to come to you, medicals didn't change because we roll [the truck out] right away for medicals – [but] it sort of tested the theory, how much of the town could we cover in 10 minutes if we had four in the truck and the indications are most of the town is coverable with a four-person crew."

The recommendation stems from the 2017 10-year Fire Rescue Management plan that listed 30 short-term, medium-term and long-term action items to improve the department. Earlier this fall, Gahler noted 80 per cent of the action items have already completed.

"We hope to continue this and potentially expand the program going forward beyond 2020," Gahler said.

Peak staffing has been approved for 2020 for day shift during the summer months again with a report from this summer's trial to be delivered to council this November.